The Monaco Press Club (MPC) invited Jean-Christophe Maillot, Director and choreographer of the Ballets de Monte-Carlo (BMC), (in the photo below with journalists Cinzia Colman and Joel Devieras) for a presentation at the Yacht Club on Thursday. Maillot arrived in the Principality at the age of 33, appointed by HSH Princess of Hanover to direct the BMC, and since then he continued his ascending career under her total support, a relationship that started mainly as a friendship sharing the same point of view about dance. 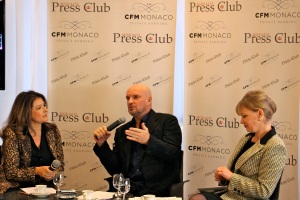 Maillot was smiling remembering when coming to Monaco was viewed more like going on retirement. He said, “People used to assume that if Maillot goes to the Principality is because he has nothing more to show.” The period between the early 80’s and early 90’s was very difficult in Monaco regarding financing for the arts. But they shared the firm commitment to create a Ballet Company “Made in Monaco” with the best dancers, not just bringing stars from abroad. They used to work in a very small studio, conducive to foster closeness but very impractical, plus a gruelling schedule that went from early morning till late at night without too much rest. When finally budgets were approved and moved to the-state-of-the-art Atelier in Beausoleil they first felt lost but very easily adapted to the superb facilities.

Living in the moment and avoiding mediocrity

When prompted about how he plans ahead, he vehemently affirmed he is not a strategist preferring to live in the moment.  He added that is easier in a small country like Monaco to react rapidly compared to the heavy bureaucracy of other large cities. I try to dream up for the future, but prefer to live in the moment with the conviction that we reach another exceptional step as we move on, definitely avoiding mediocrity. Monaco is a happening place where events succeed one after the other continuously, and every five years the company renews itself.  Maillot said he looks at the dancers as a measure of his work. He loves the dancers who have his total respect. He explains that is not like in sports where you measure in records, it is the public who will judge them. In his own words, “The Company is my responsibility, I owe it to them to surpass myself.  Our creations are exclusive and we guarantee our dancers will be performing during the 10 years of a dancer’s life, that’s why I organize tours abroad.” He added that dancers can work longer years nowadays, but dance ruins your body even if there are proteases that help. He said he needs a good relationship with each of the people in the company; it is about competence with a human dimension. “We are 140 people in the team, with a budget of 12 million Euros, 2 buildings, 50 dancers and 40 students at the Academy.” Maillot created a choreographic ensemble as the BMC is an international dance company associated with a high level school, the Princess Grace Dance Academy, and a festival Dance Forum presenting dance in all its forms, under the motto:  train, create and share. 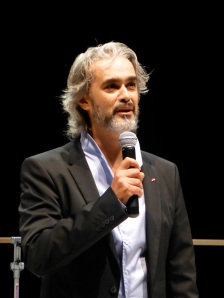 Maillot had asked Luca Masala (see photo to the left) to come to Monaco to direct the Academy, even if he had never directed a school because he believed in his talent and professionalism, and he recognized his traits as a leader. He was right because Masala is doing a fabulous job, and Maillot lets him work as he wishes with total confidence in whatever he does. Plus there are four other dancers from BMC who have joined the teaching staff of the school.  The objective of the Academy is to engage young dancers already recognized in other schools, and when they complete the training they will be working in top Ballet companies. The Academy trains the students through hard work, discipline and passion to enable them to become professional dancers and ultimately great performers of tomorrow with the whole world as their stage. The main objective is to integrate the students into international dance companies after they complete their studies. To celebrate the 20th anniversary Luca Masala has arranged a “Soiree Jean-Christophe Maillot” by the students of the Academy on Wednesday, December 11 at 20:30 at the Salle Garnier. A perfect gift from the young talented artists to a master. 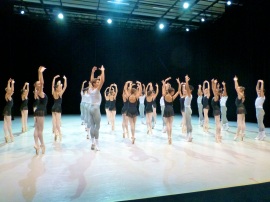 He graciously thanked the representatives of CFM Bank (Credit Foncier of Monaco), who were among the audience, for their unrelenting loyal support for the past 15 years, because without their generous sustenance they would not be able to continue their work and succeed.  CFM has been the official and active partner of the Ballets de Monte-Carlo, covering also the Monaco Dance Forum and the Princess Grace Academy, in particular funding a three-year grant for a promising young students. See dancers of the Academy performing at the Atelier on the photo to the right.

For the 20th anniversary celebration Maillot’s will offer his Monegasque public a newly created version of The Nutcracker, a completely revamped ballet he entitled “Casse Noisette Compagnie” (in English “Nutcracker Company”) this December. 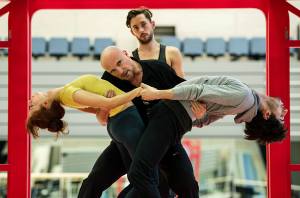 It had been his brainchild to transpose the ballet into the world of circus back in 2001 for Prince’s Rainier Jubilee anniversary of his reign with the “Nutcracker Circus”.  The show this year will be completely new, a mosaic of iconic characters that Maillot met through his career, that will tell the story of all the shows that he has done over the years, a truly imaginative fable. He has created a world where anything becomes possible and where dance can overcome even the most irreconcilable differences, reuniting his best friends and darkest demons on stage. On the photo above Maillot rehearsing for the new version of “Nutcracker Company” to debut at the Grimaldi Forum on December 26, 2013 with performances running until January 5, 2014. For reservations http://www.balletsdemontecarlo.com

When asked about who marked him in his life, he wisely responded that we have selective memory and keep only the good moments, but we learn from all of them good and bad, because all the experiences make you grow. As for his view on the future, he said he is privileged to be in Monaco, and does not know if he deserves it but he works a lot, but cannot imagine how it will be years ahead. He added, “Like everybody else he is terrified by old age, even if it brings you wisdom and you take better care of yourself, things change fast like a cards castle, we will see next year!” He said he loves the chance to work with young people all the time, as it gives him a lot of energy. He had been busy working for Monaco during these past years and now he can do creative work abroad. He would also like to bring the company to India and Africa, that is the centre of the dance world. Maillot has many more stories to tell that will come out of his magician’s hat.

Works created by Maillot for the Ballets of Monte-Carlo

Jean-Christophe Maillot has been recognized with the following distinctions:

1992 – Knighthood of the Order of Arts and letters

1999 – Officer of the Order of Cultural Merit of Monaco

2002 – Knighthood of the Honour Legion