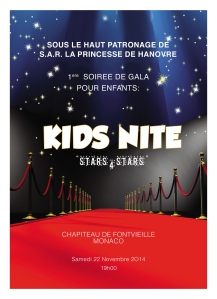 The first KIDS’NITE Gala Dinner and Show will take place at the Chapiteau of Fontvieille in Monaco, for children from 4 to 17 years old, coming alone or accompanied by their parents, organized under the patronage of HRH Princess de Hanover. It will be an exceptional party not to be missed where all profits will benefit the association The Children of Frankie (Les Enfants de Frankie).

The Presenters will be Kevin Elarbi, Gaelle and Cindy from the program Gu’Live, plus the participation of Alain Lancelot commentator in TF1. In the program there is a long list of animations throughout the evening that will enchant everybody: Paul (9 years old) from Corsica who sang during the TV program The Voice Kids; Amira winner of Holland’s Got Talent (10 years old); magnificent ice sculptures by world champion Mario Amegee; Vit Acro Bike present a Bike Trial number by world champion artists; Magician Mathias Tabo (12 years old), caricaturists, mimes and more, plus gifts for all! After dinner celebrated St. Tropez DJ Jeanne will keep everybody dancing all night long!

Tickets are free and available at the Monaco Tourism Office, 4 Boulevard des Moulins, Monday through Saturday, from 12:00 to 15:00 hs, or through the association’s website www.frankiemonaco.org  – In return guests are kindly requested to graciously provide a donation at their discretion, that will help the association to finance their 18th Frankie’s Christmas on December 10, for 4,000 ailing children in the region.

The Monegasque Day of Red Noses takes place every year on December 6, to coincide with Saint Nicolas, patron of children. This year marks the 10th anniversary of this creative initiative by  the association The Children of Frankie, inviting the residents and people working in the region to buy a little ball of red mousse to place on their vehicles, antenna, hood or interior windshield. All funds raised benefit the association and are entirely dedicated to ailing and underprivileged children to improve their daily lives. This little Red Noses show the support to children in need, a simple way to  practice solidarity.

The Red Noses that represent Frankie the Clown, mascot of the association, are sold at a symbolic price of € 2 at post offices, pharmacies and newsstands, as well as the Commercial Gallery in Fontvieille and the FNAC. For information please contact : +377 93 300 800.

Under the patronage of HSH Prince Albert of Monaco, the association The Children of Frankie organizes its 18th Frankie’s Christmas at the Chapiteau of Fontvieille in Monaco, inviting 4,000 ailing and underprivileged children in the region. A highly anticipated afternoon where children will leave their sorrows behind to celebrate the joy of the holiday season. For the third time this party will take the form of a Fun Fair adapted to all ages that will go from 13:30 till 18:00hs.

Inside the Marquee, and thanks to the generosity of Alize Events, the children will enjoy a dozen of inflatable structures. The program will include clown animations, gifts and delicious goodies for each child. Frankie’s mascot will come accompanied by Santa Claus.

This event is exclusively for 4,000 ailing and underprivileged children, specially invited by Frankie to celebrate Christmas and bring a little joy to their lives. This event is possible thanks to loyal sponsors and from the donations from those participating in the KIDS’ NITE Gala and the sale of Red Noses. We thank you in advance for your generosity! 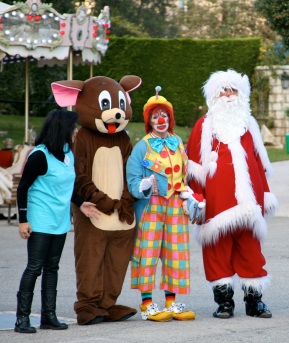 Frankie with Santa and friends

Frankie with Santa Claus and Elf

The Children of Frankie created by Francien Giraudi 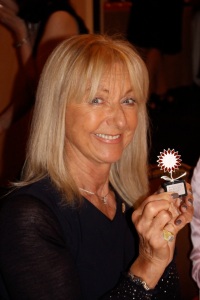 Created and presided by Francien Giraudi in 1997, The Children of Frankie has an objective to organize projects and pedagogic activities for ailing and underprivileged youngsters in Monaco and throughout the Provence and French Riviera region, better known as PACA, with a small but very dedicated staff and with the help of more than 150 caring volunteers.  It has been recognized by the United Nations as an NGO (non-governmental organization) since 2008. They collaborates with hospitals, social services, and more than two hundred institutions that help underprivileged children.

Since its inception the association has assisted more than 100.000 children in need. Even their office building rhymes with their objectives as it is housed in the “Golden Sun” (Le Soleil d’Or), with a team that works long hours so that ideas may turn into projects and ultimately become a reality, bringing smiles to the faces of thousands of suffering children.