On Tuesday, December 16, 2014, the Salle Belle Epoque of the Hermitage Hotel in Monte-Carlo was transformed into a magic forest of Christmas Trees, generously donated by prestigious houses, that were auctioned raising Euro 156,000 for the association Action Innocence. Because it’s the season for giving, part of those proceeds, will be in turn graciously donated to the Aquatic Rescue Center of Monaco headed by Pierre Frola within the Princess Charlene Foundation. 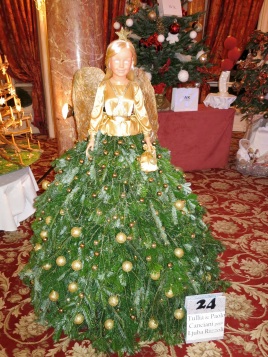 Tree No.24 Ljuba Rizzoli “The Angel of Christmas” and under the tree 2 golden bracelets

Tree No.13 Graff Monte-Carlo with a pair of pearl and diamonds earrings under the tree 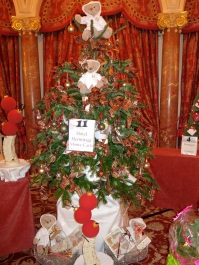 Tree No.11 Hotel Hermitage and Hotel de Paris and under the tree a 2 night stay with breakfast and dinner at each of the two hotels

Tree No.23 – CREM by Marco Traverso symbolizing the birth of the Royal twins Prince Jacques and Princess Grabriella

Tree No.10 Monaco Luxury Group “Return to Childhood” and under the tree 2 Ferrari Factory tours for 2 people each

Tree No.4 Boutique Cartier with a spotlight rose gold bracelet adroned with a diamond 0.11 carat 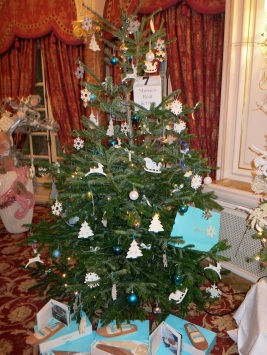 Tree No.7 Monaco Boat Service with 4 sets to assemble an Aquarama model boat

A chorus of angels from the International School of Monaco

As every year since the start of this charity auction back in 2004, HSH Prince Albert joined Louisette Levy Soussan, President of Action Innocence Monaco, showing his total support for her continuous work. A chorus of children from the International School of Monaco under the direction of Colette Max Nielsen, added to the holiday atmosphere, by singing Christmas carols. It was like angels had descended in the Principality.

Olivia Connor from the International School of Monaco 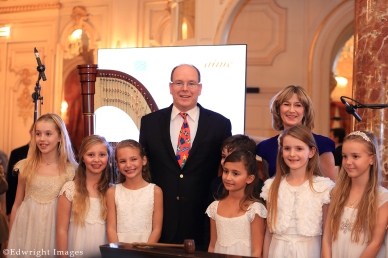 The room was packed with generous bidders who bought all the 28 beautifully decorated trees, helping the association collect the needed monies to continue their mission. Bravo to all those kindhearted souls!

“For it is in giving that we receive.” Francis of Assisi

This non-for profit association was founded in 1999 in Switzerland, and created in Monaco in 2002 by Mrs Louisette Azzoaglio. Its mission is to create awareness among children and their parents about the dangers of the Internet, including preventing them from becoming victims of sexual abuse. The Internet is without a doubt the favorite means of communication for people of all ages. This association works to protect the dignity of children by warning them of abuses such as cyber-bullying, sexting (sending of sexually explicit photos, images and text messages), gaming and the danger of impersonators, sexual predators and pornography. Their goal is to provide children with Internet safety tips and civil practices and help develop their critical thinking and decision-making skills, and at the same create awareness among parents and educators so they can become partners.

This center is the result of the combined efforts of The Princess Charlene of Monaco Foundation – whose primary objective is to save lives by putting an end to drowning – of Pierre Frola, one of its Ambassadors, and the Monegasque Government. Its mission is to enable young people to be completely autonomous in the water, and prevent accidents caused by drowning. This organization would like to go further and reach a wider audience, aiming to train beach guards, lifeguards, and anyone wishing to intervene in aquatic environments, starting from the youngest possible age.