Wednesday, January 7, 2015, was a beautiful and sunny day and people started to fill the Palace Square in Monaco early on to get on the first line and catch a glimpse of Crown Prince Jacques Honore Rainier Marquis of Baux and his sister Princess Gabriella Therese Marie Countess of Carlades born on December 10, 2014. It was the royal twins first official appearance and the day was declared a public holiday in the Principality to allow everybody to attend this historic and joyful event, almost 10.000 people waving Monegasque flags and banners and cheering for the tiny royals, with a direct worldwide coverage by 150 journalists (photographers, print press, TV radio, internet). There was an ambiance of jubilance and excitement. Large screens were installed so everybody could follow the festive occasion without missing a bit. It was a major production arranged to perfection! 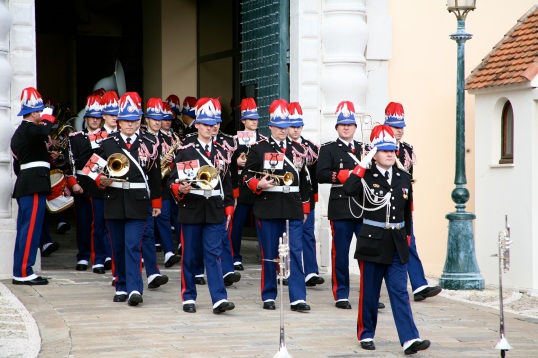 The Band of the Carabinieri of the Prince of Monaco @CelinaLafuenteDeLavotha 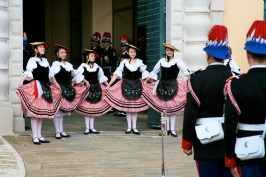 The Palladians of Monaco @CelinaLafuenteDeLavotha

Just seconds before high noon the window of the Palace opened and a radiant Princess Charlene and smiling Prince Albert appeared in the balcony each holding one of the twins. Red and White balloons were let go toward the sky in unison while the Band of the Prince Carabinieri played The Palace Guards Carillon. The month-old babies were both wrapped in cozy white blankets and appeared to be sleeping, so we could not really tell who was who. But we noticed that Prince Albert had been the first to emerge so we assume he was holding Crown Prince Jacques, and Princess Charlene, elegantly dressed in an Akris winter-white ensemble and white pearl earrings, appeared just a second later holding Princess Gabriella. Parents and children stayed in the balcony for just a few minutes as they probably wanted to avoid the twins to catch a cold, and they all got back into the Palace.

The closed windows of the Palace @CelinaLafuenteDeLavotha

Princess Charlene waving to the Monegasques with Prince Albert, both holding their twins @CelinaLafuenteDeLavotha

Happy parents holding their babies presenting them to the world @CelinaLafuenteDeLavotha

The Princess and Prince and their tiny babies @CelinaLafuenteDeLavotha

The Prince and Princess joined the Monegasques

Prince Albert and Princess Charlene then joined the Palace Square to greet members of the Government and the Council and the loyal Monegasque people. Other members of the Prince’s family appeared on the balcony including HSH Princess Caroline de Hannover, her children Pierre Casiraghi, Princess Alexandra de Hannover, Charlotte Casiraghi with her partner Gad ElMaleh, HSH Princess Stephanie and her children Camille Gottlieb and Louis Ducruet. We also spotted Charlene’s brother Gareth Wittstock and his girlfriend Rosin Galvin. It was a truly family affair! 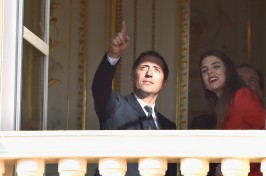 Charlene Wittstock became HSH Princess Charlene of Monaco by marriage and bears all the historical titles vested to the Prince, but now she has added one that goes over all of them: Mother. In celebrating the Royal twins we honor children all around the world and in praising their mother we honor mothers everywhere. Princess Charlene made it her mission to promote children’s education and development by creating her own foundation back in 2012. For more information visit www.fondationprincessecharlene.mc

Somebody once said: “The most precious jewels, you’ll ever have around your neck, are the arms of your children.”