On Monday, January 12, 2015, a reading area called “Rincon de Borges” was inaugurated at the College Charles III in Monaco, in the presence of Isabelle Bonnal, Director of National Education, Youth and Sports, who is always very supportive of cultural exchanges, joined by generous sponsors and members of the Association Monaco-Argentina (AMA), presided by Maria Eugenia Rubinelli. 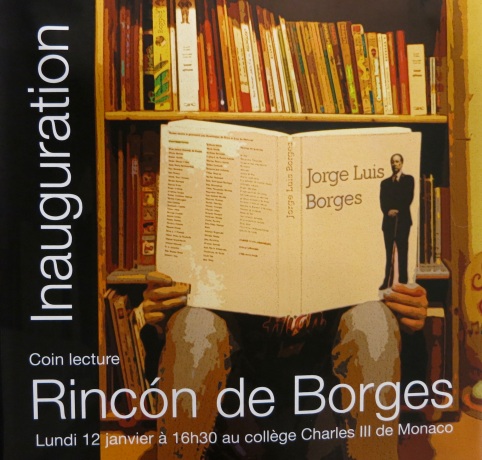 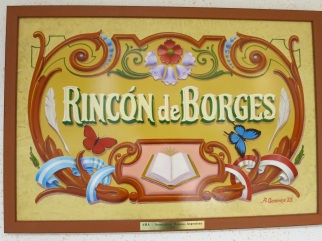 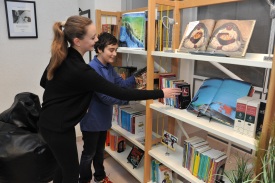 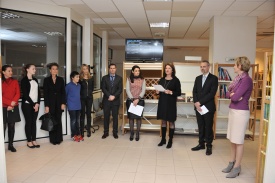 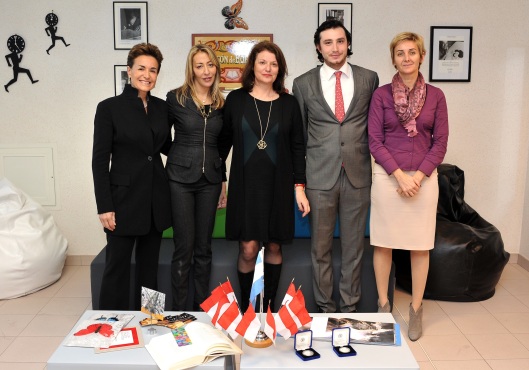 Dedicated to the discovery of the cultural richness of the Spanish language, the goal is to enable the 400 students learning Spanish at the College to discover the richness and diversity of the Latin American and Hispanic culture, under the guidance of their Spanish teachers. This cultural initiative spearheaded by AMA counted with the valuable contribution of one of its members, Analia Houwer, in close collaboration with Spanish professor Isabelle Tomatis, and made possible thanks to the financial contribution of generous sponsors. In parallel, AMA plans to create a Reading Corner in an impoverished school in Mision Wichi, Salta, Argentina providing books by Latin American authors and the necessary furniture.

AMA would like to thank the prestigious Argentine photographers, Sara Facio and Eduardo Comesaña, who supplied the emblematic photos of Jorge Luis Borges that decorate the walls; Argentine artist painter Alfredo Genovese who created the sign for the Rincon de Borges; Maria Garcia Esperon, a children’s writer from Mexico, who will honor us with a recording of the Borges’ poem “The Causes” and will donate one of her masterpieces “Tigers of the other Night” for the delight of children of College Charles III.

AMA was created in 2006 by Maria Eugenia Rubinelli, from Argentina, and Michele Rubinelli with the main objective of providing financial aid to those in need in Argentina, but above all to build a bridge between the Principality of Monaco and the South American country, to collaborate in the areas of health, education and culture. The association counts today with 45 members.

We invite you to watch a video about AMA

Meeting Borges in the flesh

I was overjoyed when I learned that AMA had decided to name the space at the College in Monaco after Borges. I am originally from Buenos Aires, Argentina and writing has been one of my passions from a very young age. Jorge Luis Borges is one of my favorite Argentine authors together with Julio Cortazar, Victoria Ocampo, Ernesto Sabato, Alfonsina Storni, and many more. There are so many I cannot list them all! I had the unique privilege of meeting Jorge Luis Borges in person, while I was taking a course to analyze and decipher the works of this grand writer. He paid us a visit on the last day of classes and we were able to interview him. Instead of questions I had written a poem that I read to him and the class, and Jorge Luis Borges honored it with his signature. It was a memorable event that will live in my heart forever. Below is a photo that immortalized that moment (I am the one between the girl with the fluffy coat and the one with the wool hat), and also my poem written in Spanish of course. 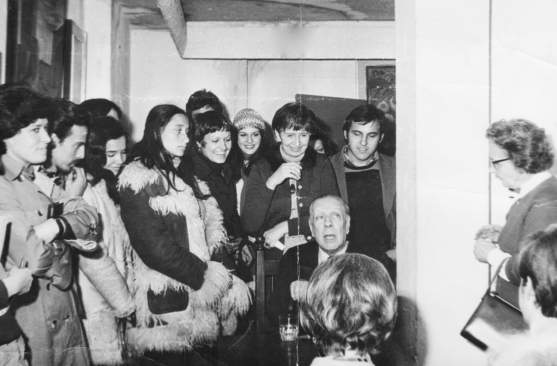 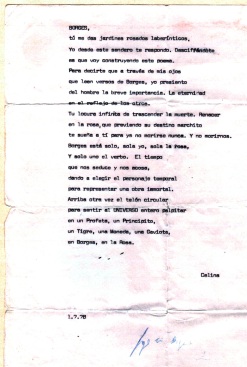 Jorge Francisco Isidoro Luis Borges Acevedo, popularly known as Jorge Luis Borges, was a renowned writer, essayist, and poet from Argentina was born in Buenos Aires August 24, 1899 and died in Switzerland June 14, 1986. He is counted among one of the greatest heroes of the country in the field of literature, who exerted a strong influence on the direction of literary fiction through his genre-bending meta-fictions, essays and poetry.

Borges’ imagination and innovative literary skills were commendable. After receiving the first International Publishers’ Prize, the Prix Formentor in 1961, he grabbed the attention of many. Borges was fluent in speaking multiple languages. His works are admired as the “character of unreality in all literature”. He was greatly influenced by European culture and English literature. He offered a noticeable contribution to the magical realism genre. Also, critic Angel Flores who used this term for the first time, marked the starting of this movement with Borges’ “Universal History of Infamy.” Some of the most appreciated works are “Fictions” and “The Aleph”. These are basically collection of short stories based on the themes like dreams, labyrinths, libraries, fictional writers, religion and God.

As Jorge Luis Borges eyesight began to fail, he had difficulty working as a writer. He began to lecture publicly to supplement his income. Once he became totally blind his mother acted as his secretary. Later in life, Borges would explain his blindness by saying, “…in a certain way there is a purification in the blindness. It purifies one of visual circumstances. Circum-stances are lost, and the external world, which is always trying to grab us, becomes fainter.”

A few quotes from Borges extensive collection of works

Our nothingness differs little; it is a trivial and chance circumstance that you should be the reader of these exercises and I their author. (“To the Reader”, preface to Fervor of Buenos Aires – 1923)

The earth we inhabit is an error, an incompetent parody. Mirrors and paternity are abominable because they multiply and affirm it. (Hakim, the Masked Dyer of Merv, in a Universal History of Iniquity – 1935)

Being conservative is a way of being skeptic. (Interview in Extra Magazine – 1976)

Writing is nothing more than a guided dream. (Preface to Dr. Brodie’s Report – 1970)

Doubt is one of the names of intelligence. (Jorge Luis Borges Private Dictionary – 1979)