Zeljko Franulovic, tournament director extraordinaire, unveiled the broad outline of the program of the Monte-Carlo Rolex Masters 2015, at a press lunch this past Wednesday, March 18, at the Pavillon Elysées LeNôtre in Paris, in the presence the main sponsors of the event.

The traditional Monte-Carlo Rolex Masters, organized by the SMETT (Monegasque Association for Tennis Tournament Management), will take place from April 11-19, 2015 in the legendary setting of the Monte-Carlo Country Club, the first European tournament in the prestigious category of ATP World Tour Masters 1000.

Franulovic revealed the final list of the 45 players who automatically will enter the Main Draw, headed by the Serb Novak Djokovoc, the world No.1 player and recent winner of the Australian Open, the Swiss Roger Federer (No.2), winner of the 2014 Davis Cup and record-holder of Grand Slam titles and the Spaniard Rafael Nadal (No.3) nine-time winner at Roland-Garros and eight-time winner at Monte-Carlo. 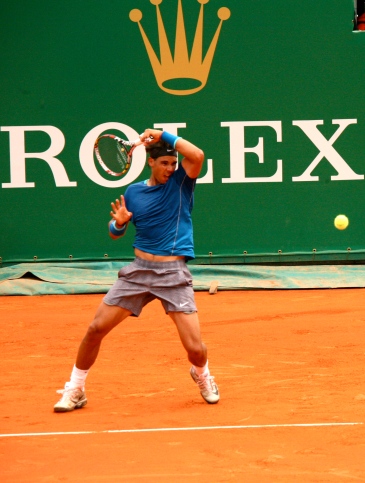 The Draw – Saturday, April 11 at the Yacht Club of Monaco

This year the Draw will take place for the first time in the new building of the Yacht Club of Monaco on Saturday, April 11 at 11:30hs, in the presence of the Swiss Stan Wawrinka (No.7), title holder and winner of the 2014 Davis Cup with his compatriot Roger Federer. Seven competitors, who will go through qualification matches, as well as 4 wild cards will be added to the main list for a total of 56 players. Immediately following the Draw there will be a mini-Tennis exhibition match between two of the best world players on the upper decks of the magnificent Yacht Club designed by Lord Norman Foster and inaugurated on June 20, 2014.

For this 109th edition, the line-up promises to be as exceptional as ever with the presence of 21 players among the top 25 in the ATP ranking, with a substantial participation of the new emerging generation: Canadian Milos Raonic (No.6), Croatian Marin Cilic (No.10) and Bulgarian Grigor Dimitrov (No.11). Representing France will be: Jo-Wilfried Tsonga (No.13), Gilles Simon (No.14), Richard Gasquet (No.25), Julien Benneteau (No.28), Jérémy Chardy (No.34) and Adrian Mannarino (No.38).

When sports rhymes with generosity

Continuing its commitment to charitable causes, this year’s Monte-Carlo Rolex Masters is supporting the initiative by the latest winner of the US Open, Monaco resident Marin Cilic (No.10), entitled “Marin & Friends“, that will take place on Centre Court of the Monte-Carlo Country Club (MCCC), on Saturday, April 11at 14:30. For this exceptional tennis exhibition event, Marin will be accompanied by his friends, including Top 10 players and former tennis legends.

Marin Cilic (No.10) at the MC Rolelx Masters in 2014 @CelinaLafuenteDeLavotha 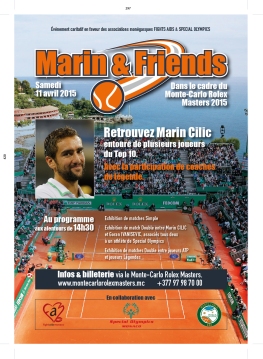 Program for Saturday, April 11 – Central Court of the MCCC

The proceeds of this event will benefit two Monegasque charity associations: Special Olympics, under the patronage of HSH Princess Charlene of Monaco, providing sports training and organizing athletic competitions in a variety of Olympic-type sports for children and adults with intellectual disabilities; and Fight Aids Monaco, presided by Princess Stephanie of Monaco, an association dedicated to the eradication of HIV/AIDS.

Your generous participation will contribute to the success of this unique event:

If you are unable to attend, you may consider making a charitable donation, by sending a wire transfer to: