All-Swiss upset during round of 16

Last year’s was an all-Swiss final in Monte-Carlo and today was an all-Swiss loss with Federer and Wawrinka unexpectedly exiting the tournament. The program started on central court with 30-year-old Stan Wawrinka (ranked 9th & seeded 7th) loosing to 23-year-old Bulgarian Grigor Dimitrov (ranked 11th & seeded 8th). It took “Baby Fed” (nickname given for his on court talent similar to Federer) 55 minutes to defeat the defending champion in two straight sets 61 62. “I don’t like loosing like that,” Wawrinka said. “The only think I can do now is accept that I played badly and try to find solutions and try to work on what I need to work on to solve the problems.” The Swiss may be losing his top 10 ranking position. Dimitrov will face Gael Monfils on Friday’s quarterfinals.

The other upset of the day was World No. 2 Swiss Roger Federer in the hands of French Gael Monfils known as “Lamonf”, ranked 18th and coming to Monte-Carlo on a wild card. Federer started ahead in the first set but lost it 6-4, then lost the second after being ahead in the tiebreak. “It was not the best end to the match,” Federer said. He is now returning to Switzerland to prepare for the next clay-court matches in Istanbul and Madrid. 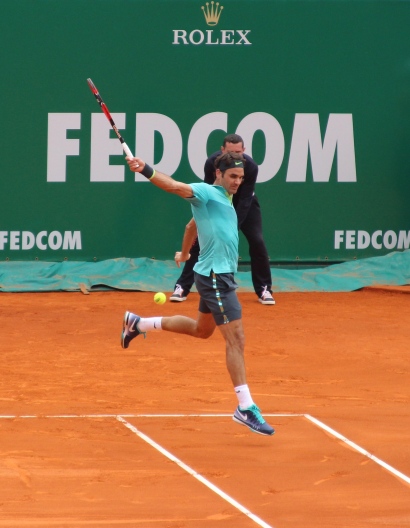 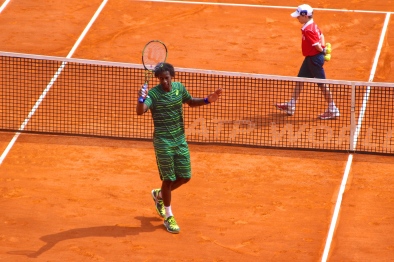 Spanish Rafa Nadal ranked 5th and seeded 3rd put a tough battle before claiming victory over American John Isner 76(6), 46, 63 after 2hours 20minutes. The gentle giant Isner, ranked 19th and seeded 15th, used his serving mastery but also his ability at the net and his powerful forehand, but it was not enough to beat the Spaniard who is in top form and will confront country man David Ferrer, ranked 7th and seeded 5th, who beat French Gilles Simon.

Rafa Nadal giving a thumbs up after his victory over Isner Apr 16, 2015 @CelinaLafuenteDeLavotha

World No. 1 Serbian Novak Djokovic slaughtered Austrian Andreas Haider-Maurer 64 60 in just 56 minutes. Djoko will play against Marin Cilic (ranked 10th & seeded 8th) in the quarters. The Croatian beat French favorite Jo-Wilfried Tsonga. “I have Marin Cilic [next], who is a Grand Slam winner, who is playing the tennis of his life… I look forward to that challenge. Obviously now it’s going to get tougher,” the Serbian said.

Djokovic at the net Apr16, 2015 @CelinaLafuenteDeLavotha

“Losing is not my enemy…fear of losing is my enemy.” Rafael Nadal