It was still daylight when the privileged 300 elegant guests, half of them American citizens, started arriving to the Palace Square in Monaco illuminated by the last rays of sun, this past Saturday, September 5, 2015, to attend the Princess Grace Foundation (PGF) Awards Gala. Even those who are always irremediably late were on time for this unique event at the Palace. The invitation called for a Cocktail in the gardens at 19:30 sharp followed by an unprecedented formal dinner, for it was the first to ever take place in the Honor courtyard under the stars, following the wish of Princess Charlene who had joined the Princess Grace Foundation committee in 2014.

It was history in the making for the PGF-USA, with the Prince and Princess of Monaco offering a magnificent setting to celebrate Princess Grace’s legacy. This unique event underlined the significant increase in collaborative efforts between the PGF-USA and the Fondation Princesse Grace de Monaco, presided by the Princess of Hanover, by co-supporting the artistic endeavours of the Foundation in the Principality that include The Ballets of Monte-Carlo, the Academy of Dance and the Monaco Dance Forum. Thanks to the dedication and generosity of its donors, both Foundations continue to thrive and fulfil their philanthropic mission by supporting and developing humanitarian and artistic projects throughout the world.

A commitment to nurturing artistic talent

The Princess Grace Foundation-USA is a non-profit, publicly supported organization, with headquarters in New York City and founded in 1982 by Prince Rainier III of Monaco to honor his wife, Princess grace’s (Kelly) legacy. The Foundation’s mission is to identify and assist emerging talent in theater, dance and film by awarding grants in the form of scholarships, apprenticeships, and fellowships, with more than 800 recipients joining the Princess Grace Awards family totaling up to date over USD 11 million. 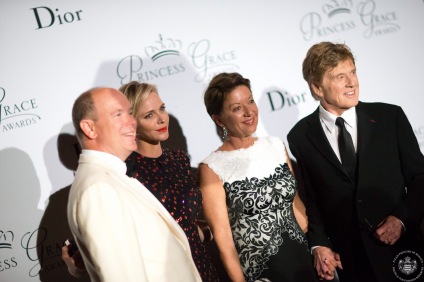 In 2005, the PGF-USA created the Prince Rainier III Award to honor his memory. This award recognises celebrated artists whose own outstanding artistic excellence is combined with their dedication to sustaining artistic greatness. In particular, artists who give back to the very art from that elevated their own careers. A contribution of USD 25,000 is made in the honoree’s name to a charity of his or her choice.

Prolific American actor and producer Robert Redford and his wife Sibylle Szaggars Redford received the 2015 Prince Rainier III Award this year from the hands of Princess Charlene. Over and above being an artist Robert Redford is an ardent conservationist and environmentalist, a man who stands for social responsibility and political involvement, a supporter of uncompromised creative expression. A large part of his life is his Sundance Institute, he founded in 1981, and is dedicated to the support and development of emerging screenwriters and directors of vision, and to the national and international exhibition of new independent cinema. I had the chance to greet Mr Redford and we exchanged some words. I told him about my admiration for his work and said: “You could have just enjoyed your glory but you went beyond and gave to others”, and he responded with a smile: “It feels better like this.”

Sibylle Szaggars Redford is a German-born Multimedia Environmental Artist who has dedicated her life’s work to creating art professionally, informed by her spiritual consciousness of our connection to life, the land and the world by raising the awareness of our environmentally unsound practices. Her paintings are represented by Mayans Galleries and Niman Fine Art in Santa Fe, New Mexico. Her most recent creations “Rainwater Colors” are currently exhibited at Mayans Galleries.

The 2015 Princess Grace Statue Award was discerned to American filmmaker Cary Fukunaga, producer of the series True Detective. This award, established in 1985, recognizes past Awards winners who have displayed consistent excellent in theater, dance, or film. This additional honor recognizes the added accomplishments of Awards winners who have made significant contributions to their chosen artistic fields after receiving their initial scholarships or fellowships. To date, sixty-two artists have received this honor.

During the cocktail we had the chance to partake Prince Albert and Princess and Charlene and distinguished guests like Robert Redford, H.E. Maguy Maccario Doyle (Ambassador of Monaco to the USA), Sir Roger Moore, LynnWyatt, Jean-Christophe Maillot, Mr and Mrs Philippe Green, Victoria Silvstedt, Mr Yves G. Piaget (Trustee of the PGF-USA), to mention just a few. Then it was time to enter the Honor courtyard that revealed thirty tables covered with a pearl gray cloth and centerpieces of white orchids and greens, a refined décor with the frescos of the courtyard covered by wonderful projected images. 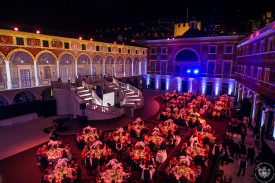 The Palace courtyard illuminated during the gala dinner @Eric Mathon_7718

View from the top of the Palace @Frederic Nebinger

Celina at the Piaget table 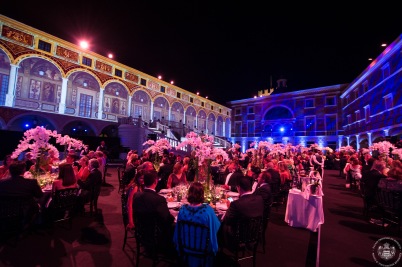 Palace chef Christian Garcia and his team organized the dinner extravaganza, with the invaluable help of young students from the hotel college in the Principality. There were 20 cooks and 100 servers for an impeccable service. It was the first time that the chef, who has been in his post for 28 years, had to prepare a dinner to be served in the open air in the heart of the Palace. 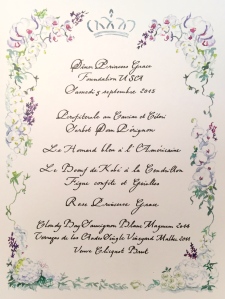 The delicious gourmet menu consisted of profiterole with caviar and celery with Dom Perignon sorbet, blue lobster American way of course, Kobe beef a la Cinderella with crystallized figs and chanterelle mushrooms. The wines fit perfectly: Cloudy Bay Sauvignon Blanc Magnum 2014, and Terrazas de los Andes Single Vineyard Malbec 2011 from Argentina. To top it all, the Princess Grace Rose dessert created by pastry chef Benoit Peruchon Monge of the hotel college was a work of art: a vanilla Bavarian with an embedded lychee and strawberries and a beautiful sugar rose, accompanied by Veuve Clicquot Brut. An epicurean’s delight!

A night to remember!

The program of this magic evening started honoring Princess Grace for her strong commitment to supporting the arts, with an inspiring five-minute video created by Helene Richard of the Parisian society Athem et Skertzo for Dior, retracing the princess’ life using images from the Monegasque audiovisual archives projected over screens installed in the twelve arcades of the gallery. We were all marveled at this exquisite elegant presentation fit for a Princess and we were all left in awe. American actress turned Master of Ceremonies Jane Krakowski introduced a radiant Princess Charlene who was dazzling in a gown from Christian Dior Couture, the Gala’s main sponsor, to welcome the illustrious guests. Honorable John F. Lehman, Chairman of the PGF-USA had a brief discourse about the Foundation and its mission.

It was followed by the performance of Noelani Pantastico and Lucien Postlewaite, 2008 Princess Grace Awards winner, who performed the romantic balcony scene of Romeo and Juliet on the spectacular double-revolution Carrera marble staircase dating from the 13th century and inspired by a similar one at the Chateau of Fontainebleau. The piece had been choreographed by Jean-Chistophe Maillot, Director of the Monte-Carlo Ballet, seated at the Honor Table during the Gala, and who recently was recognized with the title of Commandeur des Arts et des Lettres by the French Ministers of Culture and Communication. In talking to Maillot during the Cocktail he told me that the only precedent of a ballet performance in the Palace courtyard was back in 1964, when the Royal Ballet performed a Pas de Deux of Romeo and Juliet with Nureyev and Margot Fonteyn. 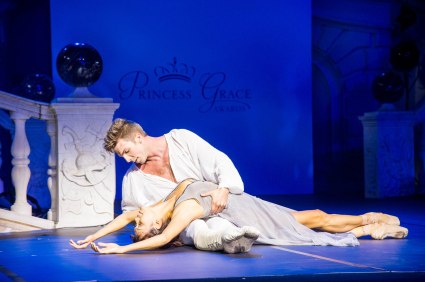 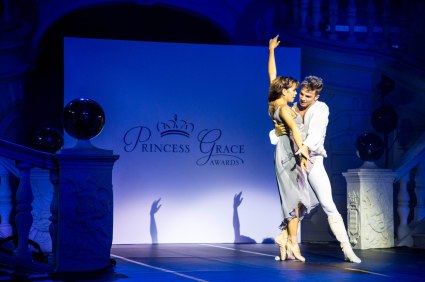 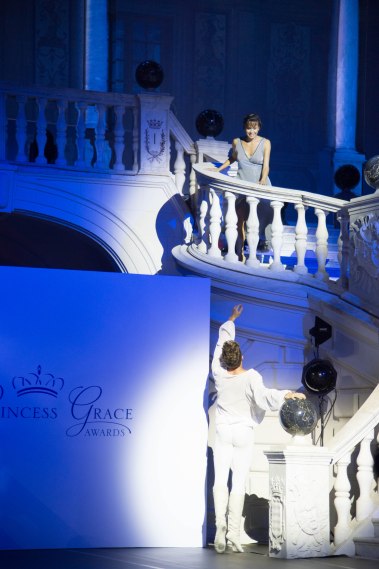 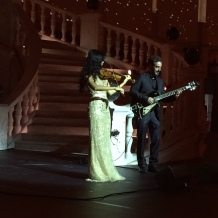 But there was another surprise, as after we enjoyed the delicious dessert, young French singer Marina Kaye (b.1998), winner of the TV program “France has incredible talent” in 2011, who had been asked to perform by Princess Charlene herself, delighted us all with her songs and fabulous voice. Specially moving was her song Homeless.

The evening had reached to an end but guests were in no rush to leave the Palace, as someone who does not want to wake up from a dream!

“To be an artist is to believe in life.” Henry Moore