A December to remember!

Created in 1985 thanks to the initiative of HRH the Princess of Hanover, the Monte-Carlo Ballet is celebrating its 30th anniversary. Over three decades, the company has been offering the public a rainbow of choreographic masterpieces one more delightful and seductive than the next. To continue with the same creative vision Jean Christophe Maillot, Choreographer and Director of the Ballet of Monte-Carlo since 1993, has concocted an even more impressive line up of performances for the 2015-2016 season, with the month of December set to be the strong focal point.

For those who have a heartwarming connection with the company, Les Inattendus (The Unexpected) will be a special treat, as these sessions grant members of the audience access to special confidential moments with the artists they worship. But they are different than the Imprevus at the dancer’s studio, because this time they will not be at the Atelier but at the magnificent Monte-Carlo Opera House. And instead of watching the making of a ballet the audience will have the chance to witness the final adjustments in the last dress rehearsal before the big night. Maillot does not cease to surprise us making closer connections between the dancers and the public.

Pina Bausch’s Vollmond will follow suit, performed by the world-renowned company Tanztheater Wupperthal Pina Bausch at the Grimaldi Forum. This is one of the last major works ever made by the legendary deceased (1940-2009) German choreographer. Vollmond means full moon, which also means high water, and overwhelming euphoria and danger mix in this water-theme carnival, where Bausch’s company are permitted to play more, and dance more. 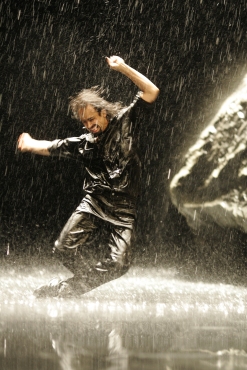 And to end the year to rhythm with the holiday spirit, Jean-Christophe Maillot will be restaging his very own version of Nutcracker, the Casse Noisette Company, with dancers from the Monte-Carlo Ballet and students from the Academy of Dance Princess Grace. This masterpiece retells Maillot’s experiences from his arrival in Monaco, creating a magical cosmos where everything is conceivable and dance becomes a spellbinding force. The choreographer is a fantastic storyteller, inviting the audience to join him in the dance and question themselves, ever so stimulating and highly provocative. To me Maillot is an enchanter or better said a dance sorcerer. 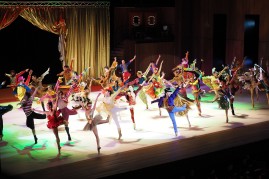 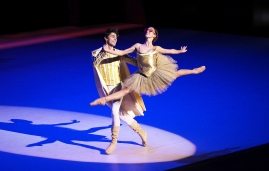 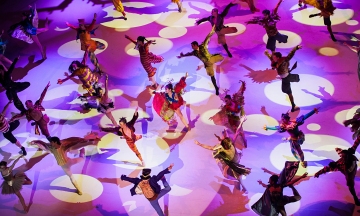 The Casse Noisette Company will be retransmitted to thousands of cinemas throughout the world on December 30, 2015.

As a culmination of the 30th anniversary celebration, Jean Christophe Maillot is concocting an all night through special event on July 31, 2016 in collaboration with SBM and the local government, with the objective of literally invading the Casino Square and its surroundings. There will be performances going on simultaneously in five corners: Salle Garnier, Salle Empire at the Hotel de Paris, the Casino Square, around the white pavilions and one on the terraces for the young public.

It will start with a gigantic dance bar evoking a dance studio with the idea of inviting the public to participate until the wee hours of the morning. There will be all kind of dances. The Salle Garnier will offer shows all night through. Jean-Christophe Maillot calls this “an infernal tarantella!” Bejart’s Bollero will be performed at midnight. There will be large screens everywhere and Maillot says: “This dance party should be done like a music festival.” Planning for this major dance project is underway and promises to be fantastic event as all of Maillot’s productions! He hopes that this unique dance extravaganza may become an annual event, and we certainly hope so. Mark your calendar!

“Dance is for everybody. I believe that the dance came from the people and that is should always be delivered back to the people.” Alvin Ailey