Rallying behind the Prince to support the fight against climate change

Monegasques and residents of the Principality gathered in the Palace Square this past Sunday morning joining other hundreds of thousands citizens from 175 countries around the planet for the march against climate change, a day before the opening of the COP21 World Climate Summit in Paris that will run through December 11, 2015. Prince Albert, his spouse Princess Charlene and their royal twins Jacques and Gabriella led the walk, accompanied by over 900 concerned supporters. The march was organised under the initiative of the Prince Albert II Foundation set up to protect the environment and to encourage sustainable development, engaged in more than 350 projects in response to the three major environmental issues: climate change, biodiversity and water. 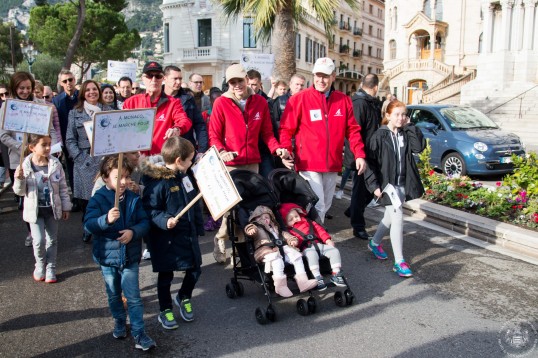 All rallying behind the Prince and his family @Gaetan Luci, Prince’s Palace

Children are well aware of the importance of climate change ©EdWImages_marcheclimat2015_0139 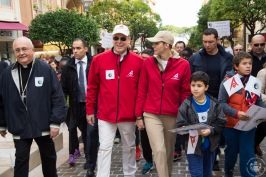 Prince Albert and Princess Charlene with Monseigneur Bernard Barci Archibishop of Monaco leading the march for the Climate through the streets of Monaco @ Gaétan Luci:Palais Princier 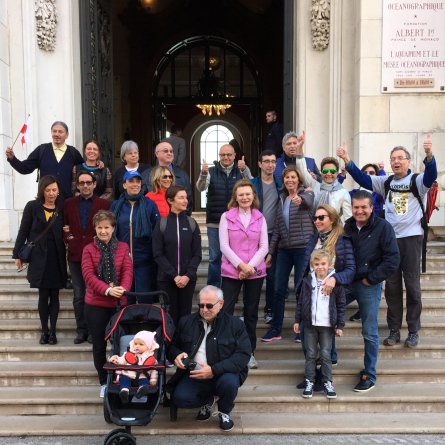 Friends of the Oceanographic Museum joining Robert Calcagno for the March for the Climate @Z.Lavotha

Robert Calcagno, Director of the Oceanographic Museum of Monaco and Martine Martel of the Friends of the Museum @CelinaLafuenteDeLavotha 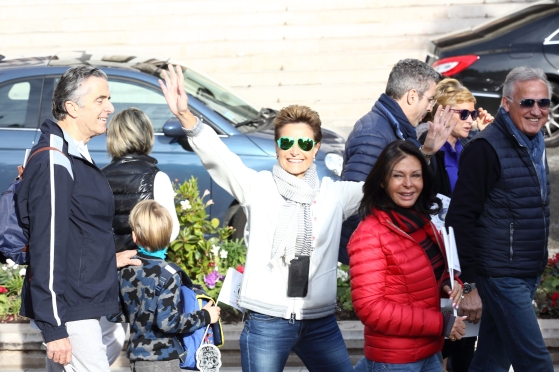 All gathered at the Palace Square in Monaco for the March for the Climate on Sunday, November 29, 2015 @CelinaLafuenteDeLavotha

Right after the march Prince Albert left for Paris, arriving directly to the Pont Alexandre III to meet the crew of the oceanographic  schooner Tara, the polar sailing vessel supported by his foundation, and visited the 600m2 exhibition on the quay entitled The Ocean on the 21st Century. He will join the other 149 heads of state in giving a presentation during the opening ceremony of COP21. In previous meetings about climate change Prince Albert has been quoted saying: “Climate change is a reality, it is not an inevitability.” He added: “Climate change and energy are the crux of the two main issues that determine our life on earth.” Emphasising that: “Setting binding international standards is important if we want to move forward.”

COP21 is a call for urgent action involving all countries in the planet to combat the effects of climate change. The fight against climate change is a subject that concerns us all and needs the implication of each one of us. As Ban Ki-moon affirmed: “Climate change does not respect border; it does not respect who you are – rich and poor, small and big. Therefore, this is what we call ‘global challenges,’ which require global solidarity.”

More than 40,000 delegates representing 195 countries are attending the COP21 in Le Bourget, a north eastern suburb of Paris, the largest conference the French government has ever organized, to attain the goal of establishing legally binding agreement to keep the average rise in global temperature below the critical threshold of 2C. Nearly 150 head of states are descending in Paris today, Monday, November 30, to commence the U.N. climate change summit, and among them U.S. President Barack Obama, Chinese President Xi Jinping and Indian Prime Minister Narendra Modi, representing the three countries with the largest carbon emissions will be there. It was not confirmed if Pope Francis would be in attendance after sending a warning about the need for global leaders to reach a binding agreement to reduce the use of fossil fuels and tackle climate change. Pope Francis’ envoy said of the marches: “The Pope is in spirit with hundreds of thousands today, hand in hand with the poor and those who seek climate justice.”

While hundreds of thousands marched around the world, Parisians were not allowed to join in this solidarity initiative, so they left symbols instead, as authorities expected troublemakers to arrive in the city for the climate talks. Peaceful protesters lined up thousands of shoes in the Place de la Republique representing climate change activists. Despite the tight restrictions placed by the French government, thousands of people formed a human chain stretching through the heart of the city to show their resolve to continue the fight for climate justice.

The COP21-UNFCC is a convenient and abridged acronym for the international conference and summit, taking place in Paris from Nov.30 to December 11, 2015. COP21 stands for the 21st Conference of Parties to the United Nations Framework Convention on Climate Change.

1992: The UN Framework on Climate Change (UNFCCC), which now has a membership of 195 nations, was adopted at the Rio Earth Summit. The framework called for action aimed at stabilizing atmospheric concentrations of greenhouse gases to avoid “dangerous anthropogenic (human-emitted) interference with the climate system”.

1995: The COP was created to review the implementation of UNFCC and the first meetings (COP1) were held in Berlin followed by subsequent conferences almost every year.

1997: The Kyoto protocol was adopted at COP3 in Japan. The protocol, which came into force in February 2005, put obligation to reduce carbon emissions on developed countries by 2012.

2005: The Montreal action plan was produced at COP11 held in the Canadian city. The plan was an agreement to extend the expiry date of the Kyoto protocol beyond 2012 and negotiate “deeper cuts in greenhouse-gas emissions”.

2009: The COP15 was held in Copenhagen where an agreement to succeed the Kyoto Protocol was unfortunately not accomplished.

2011: A Green Climate Fund was created at COP17 in Durban, South Africa.

2015: The COP21 is expected to be a historic meet in over 20 years of UN negotiations in which the parties for the first time aim at signing a universal agreement on climate, with the target of keeping global warming below 2C from the current 2.5 to 3.76C. Reducing dependence on fossil fuels is the key focus of this conference.

“The time for talking is past. Now is the time for action, based on genuinely independent quantitative analysis. Unless we start the radical transformation needed we are not going to achieve a climate-secure energy system in time. The proliferation of talking shops increases the risk that we continue to procrastinate by kicking the can down the road. Carbon Tracker will be watching and will provide independent oversight to hold the incumbents to a clear 2˚C benchmark backed up with quantitative analysis.”Anthony Hobley – CEO of Carbon Tracker

One thought on “Prince Albert, Princess Charlene & their twins lead the March for the Climate in Monaco – Advocating urgent global action”