Building a bridge between Nepal and the rest of the world

The Festival Le Temps Presse (No Time Left) that held its 5th edition in Monaco last December 2015, has launched a new collaborative and solidarity project by well known filmmaker Eric Valli, member of the FIFEL Prize this year. It is a documentary entitled “Nepal-Beyond the Clouds”.

Eric Valli, known for having lived and worked in Nepal for many years and who has produced among others the film “Himalaya, the childhood of a chief”, proposes to explore the Nepal of the present. He was in Nepal during the earthquake that devastated the country in April 2015, and his documentary invites you to a whirling plunge into the heart of the mountains to share the Nepalese people’s fight for survival. Valli was accompanied in this project by nomad photographer Jerome Gence, and Bishnu the best Nepalese photography director. 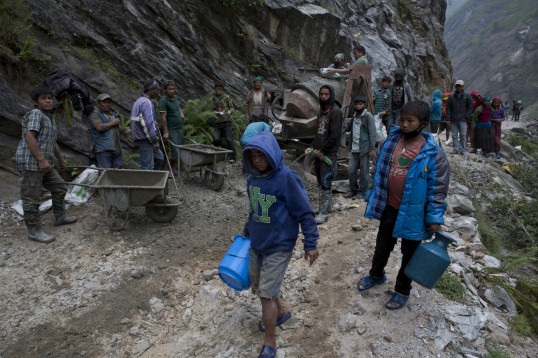 Rebuilding roads in the mountains by Eric Valli

Make a donation & become a co-producer of this epic documentary

To finance the shooting of the film, the team of the Festival Le Temps Presse have launched a fund-raising on Touscoprod with the objective to raise a minimum of Euro 10,000 over the Euro 50,000 necessary for them to finish this heroic documentary.

It is an exciting project and I have already contributed. I invite you to make a donation and become a co-producer in this fantastic adventure, make this project a reality, and help build a bridge between Nepal and the rest of the world.

Please support this project by going to:

“Film is incredibly democratic and accessible, it’s probably the best option if you actually want to change the world, not just re-decorate it.” Bansky