During the 26th edition of the BP World Ice Art Championships in Fairbanks, Alaska, that runs from February 22 through March 27, 2016, Mario Amegee from Monaco and his ice-carving partner Vitaliy Lednev, from Russia, took 2nd place in the realistic category of the Single-block Competition, with their beautiful ice sculpture Jellyfish Hunter listed under site 42.

A tour of the ice park before Single-block judgment time

Encounter is a monumental multi-block ice-sculpture 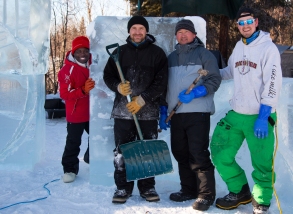 Mario’s team did not receive a prize in this category but their work is truly majestic. Unlike the Single-block, where each team has two and a half days to create a sculpture out of one block of ice weighing 6,000 pounds or approximately 2,700 Kg, the GCI Multi-block consists of ten   6’ x 4’x 3’ blocks of ice that together weigh 43,000 pounds or 19,500 Kg.

Mario Amegee is a phenomenal world-class ice artist and has been winning championships medals all over the globe. Mario’s creations are an offering of love to the public at each exhibition, and a call to the world for the respect for nature, peace and solidarity among human beings.

This creative artist, through his company Crystaldream, is very solicited for major public and private events in the presence of renowned personalities like: Bill Gates; American singer Seal; former USA President Bill Clinton; Prince Albert II of Monaco for whom he illuminated his wedding in June 2011 with ice sculptures of animals in real size; Kofi Annan; former French President Nicolas Sarkozy; as well as gastronomy ambassadors who admire his work: Christophe Le Roy, Joel Garault, Marcel Ravin, Alain Ducasse, Christian Garcia, and others.

The BP World Ice Art Championships take place annually in the heart of Fairbanks, Alaska, and it is among one of the most impressive sculpting festivals around the world. It has become the World Cup of ice-sculpting, attracting artists from across the globe. Founded in April 1990, to continue the tradition of Ice Sculpting in interior Alaska, a tradition that began with the early celebrations of spring involving Ice Thrones for the Winter Carnivals of the 1930’s.

This annual event hosts over 100 ice artists representing 9 countries, and many states of the USA. More than 45 countries have already participated and the number keeps increasing. The main purpose is to promote artistic and educational endeavors using ice and snow and any other appropriate media, to enhance and promote international friendship through cultural and artistic exchange, while displaying the heritage past, present and future of all cultures, and promoting Alaska.

The origins of an ephemeral art

Ice sculpture is an exquisite yet ephemeral art form that uses ice as the raw material. The lifetime of a sculpture is determined by the temperature of its environment, lasting from just a few minutes to possibly months. Many hard working hours are spent into amazing creations by talented artists, only to melt away and vanish. But thanks to the art of photography they become timeless. A true case of art helping art!

Artists use tools such as chainsaws, handsaws, hairdryers, even irons and chisels to carve the ice, usually working in ultra-cold environments such as large walk-in freezers to guard against melting. Nobody exactly know where did this idea of transforming ice into wonderful sculptures came from, but it has been around for very long time. Early Inuits (indigenous people in the Arctic region of North America) travelling across present-day Alaska, Canada and Greenland started building ice and snow houses for shelter – known as igloos – around 4,000 years ago. The uses and benefits of ice as a resource eventually came known around the world.

In his book Ice Carving Made Easy, author Joseph Amendola, tells us that written records dating back to 600 BC reveal that in the highlands of Northwest China, farmers would flood their fields with water to harvest the blocks of ice when they froze and store them in insulated facilities to help reserve perishables like seafood. He also describes that both in ancient Rome and India, the wealthy began eating and drinking ice mixed with fruit juices as a lavish dessert, before ice cream and sorbet made an appearance. In parallel, the moulding and sculpting of ice into different shapes became more sophisticated, incorporating the use of salt and tools. In the 1600s, Chinese fishermen in the NE province of Heilongjiang started sculpting lanterns from ice – freezing water inside buckets, removing the buckets and inserting candles. Nowadays they hold the annual Harbin Ice and Snow Festival, with the highlight being the ice-lanterns. Around 1739 Russian empress Anna Ivanovna ordered the construction of a house made of ice from the river Neva for special events, that would be the first known “ice palace” in the world.

Today, ice sculpting is taught in culinary schools as it is incorporated into the culinary arts. Ice sculptures are used in entertaining, both as beautiful decorative statues and as functional display pieces.