Monaco Sea Festival 2016 – Everyone on the sea!

“Everyone on the sea!” is the slogan for this summer’s sea festival honoring St. Peter, patron saint of fishermen this coming Saturday, June 25, 2016.

Organized at the initiative of the Yacht Club of Monaco, this year’s festival counts with the close collaboration of a host of Monegasque institutions, including the Monaco City Council, the Rowing Club, the Pleasure Boats Society, the Prince Albert II of Monaco Foundation, the Oceanographic Museum, the scuba diving club, and the Monegasque association for the protection of nature.

A full day program inviting people to discover a host of water-based activities: giant water slide, stand-up paddling, rowing, sailing, scuba diving introductory sessions, plus a photography exhibition. The highlight will be a grand nautical parade between Monaco’s two harbors, preceded by a blessing at sea. 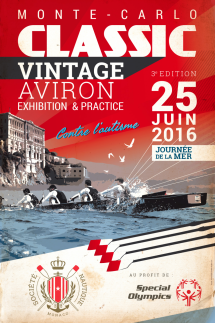 Within the framework of the sea festival, the Monegasque Rowing Association welcomes guests to a brunch with the objective to be initiated in the pleasure of rowing in the sea, with proceeds to benefit Special Olympics Monaco in support of the fight against autism. This charity event, that in previous editions took place at the Monte-Carlo Country Club in the form of a Vintage tennis tournament and now moved to the sea, is the initiative of the dynamic duo: Jerome Sequin and Safia Al Rashid, with the support of many friends.

Guests are welcome from 10:00 till 17:30. The participation fees are €150 per person, and €50 for children under 12 years old. At 14:00 there will be an auction of attractive items offered by generous donors, including an ASM football shirt signed by the players, a Chopard necklace, and a VIP tent to follow the Rowing World Cup. At 16:00 there will be a raffle with items like a pair of shoes by Mercedes, a tennis lesson with pro Jerome Sequin, a weekend La Ferme des Lombardes, Solavie cosmetics, one-year membership to the Rowing Club of Monaco. Proceeds will be entirely reversed to Special Olympics. Thanks in advance for your involvement and generosity!

And to culminate the day in a good note from 16:00 a DJ will keep everybody on their feet celebrating!

Please note, that the common animations organized by the different Monegasque institutions, in collaboration with the Yacht Club of Monaco need a free registration available on their site.

The meeting point will be at 10:00 in front of the Oceanographic Museum for pointus, keelboats, one-designs (all under 18m) – sailing and motor boats – from the Principality and neighboring towns, everyone is welcome to be part of the show. The YCM Monaco’s flagship, Tuiga, will participate in the festival for her first official outing of the season.

From 12:30 a long table will be set up on Quai Louis II for a brunch of Monegasque specialties prepared by Chef Christian Plumail for those participating in the grand parade, with entertainment provided by the choir from the Rainier III Music and Theatre Academy.

Everyone on the sea for the parade!

“The sea, once it casts its spell, holds one in its net of wonder forever.” Jacques Yves Cousteau