Sharks, Friend or Foe? Living in harmony with other species to protect our ecosystem

For a better understanding of sharks

The recent premiere of the thriller The Shallows, with heartthrob American model and actress Blake Lively who is attacked by a great white shark, encouraged the Oceanographic Institute to make the public aware of the existence of the useful and comprehensive “shark’s toolbox”. Their objective is to provide accurate information about this animal at the pinnacle of the marine food pyramid, who plays a critical role in ocean ecosystems.

It was under the initiative of Prince Albert of Monaco, that two workshops of international experts on sharks were organized by the Oceanographic Institute in 2013 and 2014, generating a unique document known as a “sharks’ toolbox”. It gathers all the solutions already existing in the world to protect from sharks’ attacks by putting into perspective the reality of the risks confronted by man. “A better understanding of sharks, the technology available today and a concerted effort to manage our activities, will allow us to share the oceans with sharks,” said Prince Albert.

On October 8, 2016, Robert Calcagno, General Director of the Oceanographic Institute, wrote in an opinion column that it is exactly 41 years that separates the movie Jaws, directed by Steven Spielberg and based on Peter Benchley’s novel, that premiered in 1975, and The Shallows directed by Spanish Jaume Collet-Serra and released on August 17, 2016. The posters are very alike, as well as the main symbols: a shark threatens in the water and a vulnerable woman on the surface. Without doubt the similarities end there, except for an important one: the caricature of the sharks as “man eaters”.

If the great marine predator never enjoyed good press, symbolizing a terrible menace, the film Jaws only reinforced this sentiment. From 1975, the times have changed, and man has evolved vis-à-vis sharks. Especially when we now know that among the 500 shark species, only 5 may present a risk to humans. All the experts agree to judge this risk statistically measured: around 10 deaths per year throughout the world on average. Comparing the 1,000 deaths by crocodiles and even 800,000 by mosquitoes, you tell me who is the worst predator? 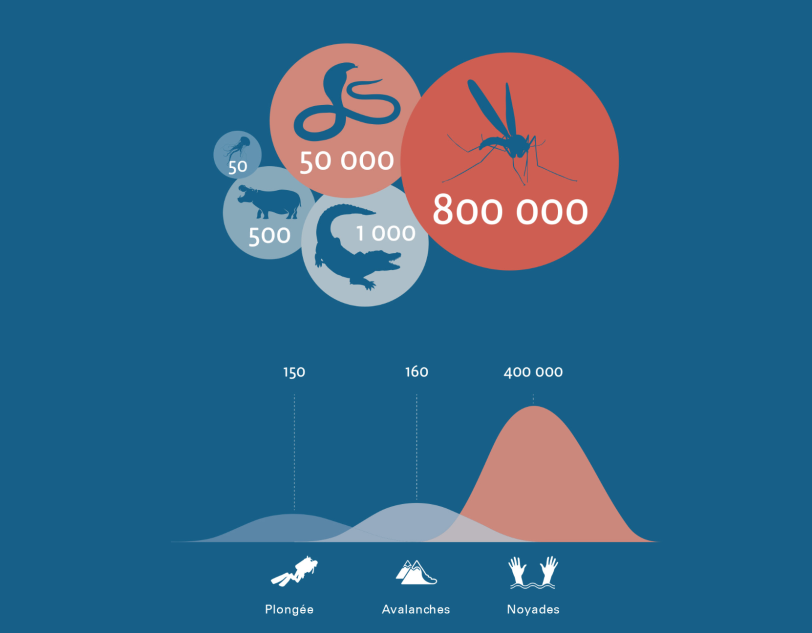 I would agree with Calcagno that films like The Shallows tarnish the already bad reputation sharks have, and further obstruct the realisation of the need to protect them and our ecosystem. As an incredible paradox, Calcagno points out that the principal actress in the film, Blake Lively, was heard defending sharks: “I went to dive with the great white sharks maybe five years ago and it was one of the best experiences in my life. It really opened my eyes. You see these creatures in their habitat, they do not chase you.”

The cinematographic industry exploits the old recipes that play on our fears, and Calcagno finds it irresponsible that they serve us another shark serial killer 40 years later. Peter Benchley, author of the book where Spielberg based his film “Jaws” was frightened by the terrible consequences his masterpiece unleashed, to the point that he consecrated himself to the protection of sharks until the end of his life. Maybe Jaume Collet-Serra, Director of The Shallows, will also end up realizing the disservice he does to the oceans, and he will also become a defender of sharks.

The 11 cards in the dossier line up the many initiatives taken in the areas of the globe known for shark attacks, that even when rare there are no less dramatic. Recognizing that life is precious, the Oceanographic Institute has a double objective: to promote the toolbox to protect the people who want to enjoy the seas safely, while informing on the relative threat that those animals mean for man: on average 10 deaths per year in the world against 800,000 by the mosquito. There is an animated video that exposes those initiatives very clearly. (Please note that the English version will be released shortly.)

In comparison, sharks are disappearing from the ocean at a high speed, around hundred millions each year, victims of over fishing mostly for fins soup. The shark population would be decimated at a rate of 75%, maybe 90% in only 50 years.

According to Robert Calcagno, “If it weren’t for this caricature of sanguineous killer, without doubt due to its features but also due to the talent of Steven Spielberg, the shark would have benefited of a fastest growing awareness regarding its protection. Because the majority of the 500 shark species, where 180 are considered threatened, develop and reproduce very slowly. The reconstitution of the populations would be particularly slow and uncertain, even if its regulator role is essential to the balance of marine biodiversity.”

The sharks’ toolbox was designed for governments and largely for everybody involved in managing risk, the dossier will be useful to journalists interested in the subject. You may consult the PDF version of the toolbox in English.

This reference document promises an organized and pacific cohabitation, but keeping in mind that not one solution amounts to zero risk. It is a useful complement to the work done after 2010 by the Oceanographic Institute on the sharks situation, where an exhibition it is still visible until November at the Oceanographic Museum in Monaco and a book “Sharks, beyond the misunderstanding”, Robert Calcagno, Editions du Rocher. In 2014 the Oceanographic Museum of Monaco organised an art exhibition entitled On Sharks & Humanity to create awareness about understanding and protecting sharks to safeguard the ecosystem.

“We provoke a shark every time we enter the water where sharks happen to be, for we forgot: The ocean is not our territory – it’s theirs.” Peter Benchley