Ferretti unveiled world premiere yachts to the sounds of Elton

On Friday, September 2, 2016, on a starry Mediterranean summer night Ferretti in partnership with the Yacht Club of Monaco featured a private concert by Sir Elton John on the marina surrounded by thirty yachts, representing all the brands of the prestigious group. Ferretti Group motor yachts have always distinguished themselves in the international boating sector for their outstanding quality, impressive safety and excellent performance at sea, as well as for their exclusive design and timeless appeal.

The celebrated artist gave a solo concert in his legendary piano, performing his most acclaimed hits including: Candle in the Wind, Rocket Man, Daniel, Bennie and the Jets, Crocodile Rock, Circle of Life, Your song, and some hits from his latest album Wonderful Crazy Nights with the opening song Blue Wonderful.

The concert unfolded the Private Preview weekend, the highly anticipated event where Ferretti Group presented their whole fleet, with six world premiere models: Ferretti Yachts 850, Ferretti Yachts 450, Pershing 5X, Rivamare, 76’ Bahamas and Custom Line Navetta 37. This exclusive event kicked off the big luxury yacht meetings with the Cannes Yachting Festival on September 6, and highlighting the Monaco Yacht Show that will run from September 28 through October 1, 2016, bringing together the largest yachts in the world. 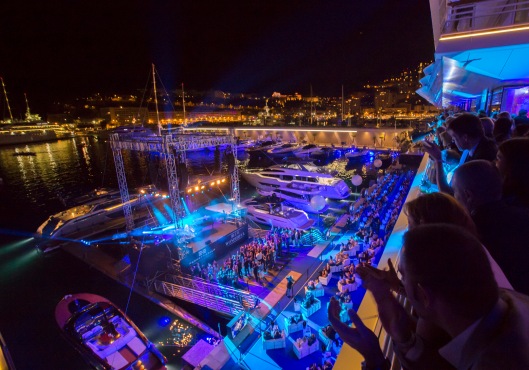 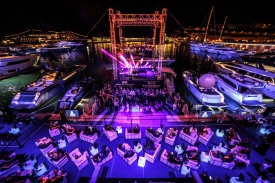 After an hour and a half of playing the British mega star received rapturous applause from the privileged 1,000-plus guests assembled on Quai Louis II and on the terraces of the YCM. He left the stage in style by boarding his Riva, to a resounding salute from all the yachts in the Yacht Club’s Marina sounding their horns, a fitting tribute for someone who is passionate about yachts.

Alberto Galassi, Ferretti Group Chief Executive Officer, commented: “Extraordinary music and the most beautiful boats on Earth together for a magic event, thanks to a unique legend of music that opened an amazing weekend filled with many previews. Sir Elton John’s concert was an incredible experience, a breath-taking night that we offered to our clients while awaiting them to visit us again during the upcoming yachting festivals in Cannes, Monaco and Fort Lauderdale.”

The Yacht Club de de Monaco General Secretary, Bernard d’Alessandri, was particularly delighted: “In line with our mission to bring life to the harbour and offer moorings for superyacht owners, it has been a great pleasure working with a prestigious company like the Ferretti Group and to welcome owners from all over the world for this unique event. Through our La Belle Classe label, the Yacht Club and the Principality in general, is establishing itself as an inimitable destination for international Yachting.”

“Music has healing power. It has the ability to take people out of themselves for a few hours.” Sir Elton John