Newcomer in the GC32 racing circuit gaining in experience

Catamaran Malizia, a newcomer in the GC32 racing circuit, with no other than Pierre Casiraghi at the helm and an experienced crew, arrived 6th in the second to last stage that took place this past weekend September 22-25, 2016 in Sotogrande, in the splendid Costa del Sol, Spain. They had edged to the 4th place over the 11 teams registered, with a first place in the “Owner / coxswain” category, quite a disappointment for the Monegasque catamaran recently arrived to the series, skipped by Casiraghi surrounded by Sebastien Col, Boris Herrmann, Richard Mason and Alister Richardson. 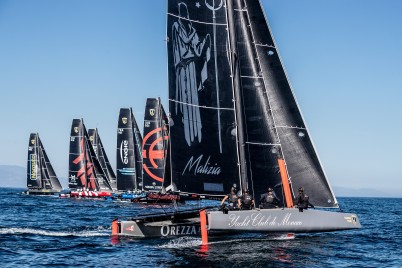 Malizia, the Yacht Club de Monaco’s new race boat, was named in honor of Casiraghi’s Genovese ancestor Francesco Grimaldi—who was dubbed “La Malizia.” “I always wanted to give this name to a race boat because of what Malizia represents for us in the Principality of Monaco,” he explained. But the regatta in Andalusia was marked by the uncontestable domination of the French team Norauto of Franck Cammas. Over the 15 rounds in four days, the team lead by Adam Minoprio prevailed ten times and won with 20 points ahead of Team Tilt.

“Sailing is both a way of life, and a sport,“ said Pierre Casiraghi. Following his passion he will participate in the Voiles de St. Tropez this coming weekend, on board Tuiga (1909), admiral vessel of the Yacht Club of Monaco. For the occasion, Casiraghi has invited members of the Malizia crew to make them discover ancient navigation on a 15 M Jl, true course boat, that does not fly, but where the high level of demand is comparable.

“If you surrender to the wind, you can ride it.” Toni Morrison