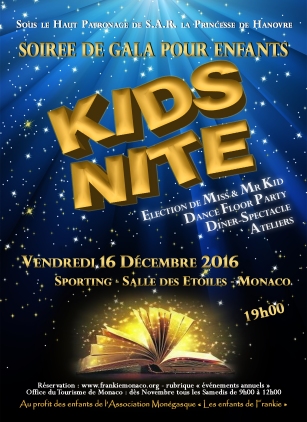 The charity Gala Evening KIDS NITE – ACT III, planned by the association Les Enfants de Frankie, this year will take place in the magnificent Salle des Etoiles of the Sporting Monte-Carlo, on Friday, December 16 at 19:00 organized under the high patronage of HRH Princess of Hanover, will welcome around 600 guests.

This evening will debut with a Photo shooting and the children will be able to participate in different ateliers: Make up, Tattoos, Nail Bar, Balloons sculpting, Velcro-Wall and other surprises.

Guests will enjoy a delicious dinner specially concocted for the occasion by Chef Alain Cavanna. During dinner, children will be accompanied by the ballerinas of Promo Art Monte-Carlo Production, the young 12-year-old singer Natalie Makatsaria, and the Chorus of the Rainier III Music Academy.

A fantastic show will follow mixing magic and humor:

Also in the program will be election of Miss & Mr Kid 2016, where ten children will be selected by a jury composed of three children present that evening. The two winners will receive an exception gift. But that’s not all because there will be items to be won thanks to the chance number in the program that will be distributed on arrival.

To culminate the beautiful evening, the children will be able to show their moves on the Dance Floor animated by no other than DJ John.

Frankie the clown wants to thank from the bottom of his heart everybody who plans to participate in the charity gala, for the kindness and generosity. 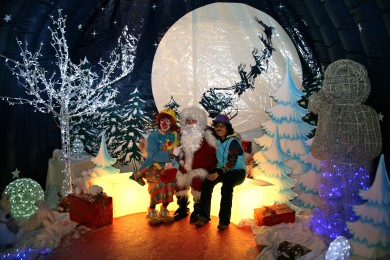 Thousands of kids will be invited to celebrate Christmas for the first time in this magic venue under the stars, to assist to a fantastic show mixing magic, love and humour.

And many more surprises…

For the children is the perfect occasion to get together in the jubilation and spirit of the holiday season and put aside their daily troubles. As the tradition goes, at the end of the spectacle, Frankie the clown, mascot of the association, will distribute gifts and savory snacks.

This 20th extravaganza marks the commitment of the association towards underprivileged children in the region that they support since 1997. Some of them have become educators or nurses for the children coming this year. Frankie’s Christmas is made possible thanks to generous sponsors and members of the association and the solidarity of families that participate in Kids Nite, the gala event that takes place on Friday, December 16.

On Tuesday, December 6, on Saint Nicolas patron of children, Les Enfants de Frankie, organizes the 12 edition of the “Monegasque day of Red Noses”, under the high patronage of Prince Albert II. But the novelty this year is that the “Red Noses” become Yellow with the support of the Society Smiley World Limited, the emoticon giant.

This little ball represents the support towards the children in need in this region. Each person will be able to participate in this action by placing it in the antenna, hood or windshield of their vehicle on December 6, as simple way to show solidarity.

You may buy the Red Nose/Smiley-Yellow in Monaco Post Office, Pharmacies, Newspaper stands and partners point of sale, and at the Fontvieille Commercial Center

Or you may order by calling Jessica at +377 93 300 800, or via email secretariatfrankie@monaco.mc, or consult their website at www.frankiemonaco.org 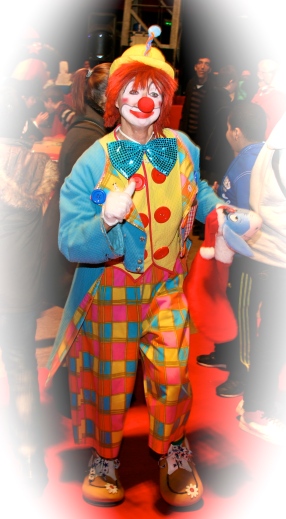 The association Les Enfants de Frankie (Frankie’s Children) was created on November 21, 1997, with the objective of entertaining and support disadvantaged children in the area. They work in collaboration with Social Services, Hospitals, Homes and more than 200 Humanitarian Associations. Frankie is the revered association’s clown mascot with whom everything began. He is a friendly and generous clown who transforms suffering into happiness. Frankie is a mime, who listens attentively to the world around him with compassionate ears, and offers support and brings joy to the children he adores.

Since its inception, the association has helped more than 100,000 children, and despite the ups and downs of the economic cycle, takes good care and carries out new projects each year. This perseverance and innovative ideas come from the President, which makes it a point to adapt to the ever growing needs of children while mobilizing the population in a fun way.

Every year the association carries out more than twenty individual projects for the most needy, such as the purchase of a wheelchairs for example, and organizes many monthly outing to entertain the children, showing them that there is another world beyond the white walls of a hospital or the gray buildings of a precarious neighbourhood.

Their famous annual event Noël de Frankie (Frankie’s Christmas), organized since 1998 under the high patronage of H.S.H. Prince Albert, welcomes each year over 4,000 children to enjoy the magic of Christmas. An event that is made possible thanks to the funds raised at the association’s annual Charity Gala.

Les Enfants de Frankie counts each year on its loyal members, as well as its generous donors. The volunteers are always present for the welcoming and the supervision of children during the multiple activities and very valuable support during the large events. Without them and without you, the realization of these projects could not be possible.