World AIDS Day – United in the fight to end the epidemic

Thursday, December 1, 2016, was World AIDS Day, an opportunity for people all over the world to unite in the fight against HIV. The date was designed in 1987 and is dedicated to raising awareness of the AIDS pandemic caused by the spread of HIV infection and mourning of those who have died of the disease. The 2016 Federal theme is “Leadership. Commitment. Impact.”

On this occasion, HSH Princess Stephanie, Founder and President of Fight Aids Monaco (FAM) as well as UNAIDS International Goodwill Ambassador and her team, organized different communication and prevention operations, as well as their traditional art-auction fundraising event benefiting their association.

On Wednesday, November 23, 2016, the operation “Test in the City” marked its 7th year in the Principality in partnership with the Princess Grace Hospital, its Emergency Service, as well as the Monegasque Red Cross. It is an anonymous screening test, free of charge and fast, with results within 10 minutes. In French the kit is known as TROD (Test Depistage rapide a Orientation Diagnostique), equivalent to Rapid HIV Testing in English, and enables to detect anti-HIV-1 and anti-HIV-2 antibodies by a simple finger prick, than can easily be carried out by non-medical people who are nevertheless trained in this procedure.

The main objective of this screening is to keep people informed of the latest scientific advances, learn how to protect oneself and others, and most importantly put an end to stigma and discrimination. 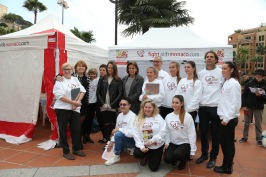 The 6th edition of the AIDS Memory Quilts (Courtepointes in French), are works of art on canvas, both individual and collective that honors AIDS victims. In 1987 the “Names Project Aids Memorial Quilt” foundation came up with this initiative to illustrate the devastation caused by the disease. Each quilt is made of 8 canvas sewn to each other, over a surface of 4m x 4m, all bearing the name of a victim and they were all produced by people of Fight Aids Monaco, most of them living with HIV. These quilts were exposed in the Honor Hall of the Oceanographic Museum on Monday, November 28. It is a way to honor the victims and a heartfelt message that they will never sink into oblivion.

With the generous support of Barclays Monaco a new edition of the FAM Charity Auction took place at the Meridien Beach Plaza Hotel on Thursday, December 1, 2016 in the presence of HSH Princess Stephanie accompanied by her brother HSH Prince Albert II, and her youngest daughter Camille Gottlieb. 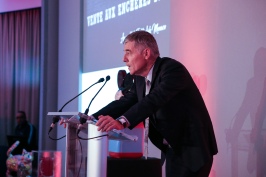 There were 45 art pieces (sculptures, paintings, photographs, lithographs) generously donated by the artists or collectors, auctioned under the expert hammer of Maitre Francois Tajan from Artcurial. A total of € 287,500 were raised, and those funds will enable the association to continue their actions. The truth is that in spite of all the efforts, HIV has not been eradicated yet and there is still a vital need to raise money, increase awareness, fight prejudice and improve education. Princess Stephanie expressed her profound gratitude to artists, donors and generous bidders for their generous participation.

Artworks displayed during the auction @FAM 2016

My husband Zsolt and I had the pleasure to be seating at a table with talented artists like Jen Miller and her husband Anthony Alberti/Mr One Teas, representatives of the artist Ian Berry and Line Ringtved Thordarson, who had kindly donated their artworks for the auction. We also had the chance to meet the Spanish artist Kiko Alcazar friend of Manel Dalgo, a loyal and dedicated volunteer of Fight Aids Monaco. The two pieces that had the higher bids were one by Dominique Tarle at € 70,000 and the other by Bernard Bezzina  sold for € 50,000. 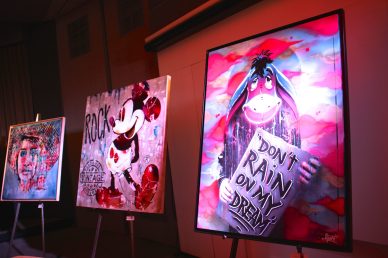 From left to right works by IZA Zaro, Geraldine Morin and Anthony Alberti’s Don’t Rain on My Dream @CelinaLafuenteDeLavotha 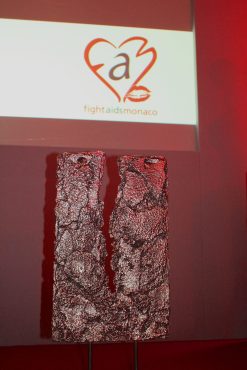 On December 1, 2016, the Department of Education, Youth and Sports of Monaco in partnership with Fight Aids Monaco, participated in different events organized every year in different schools in the Principality within the framework of AIDS information and awareness. The close collaboration among the Department of Education, the Direction of Health and Social Affaires and the Center for Free Anonymous Screening, has enabled college students to attend interactive workshops and conference on AIDS. The objective is to establish a useful dialogue with the students to create awareness on the evolution of the AIDS epidemic, new available treatments, emphasizing the need for individual protection and prevention. 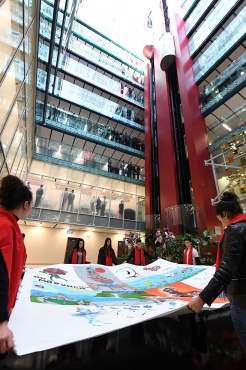 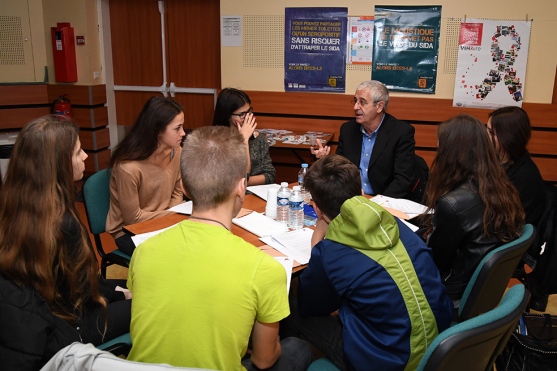 Workshop on AIDS prevention in schools in Monaco @Manu Vitali

A Monegasque delegation, lead by H.E. Carole Lanteri, Ambassador and Permanent Representative of the Principality of Monaco at the UN in Geneva (see photo insert), participated in the 39th session of the Coordination Council Program (CCP) of UNAIDS, in Geneva from December 6-8, 2016.

The joint UN program on HIV/AIDS (UNAIDS) reunites the efforts of 11 UN institutions and mobilises the international community to end the Aids by 2030, in the framework of the sustainable development objectives.

Reuniting twice a year, the CCP in the directing organism of UNAIDS. It is composed of 22 elected member states, representatives of UNAIDS organisms and lay participants. In its quality of council member, the Principality represents its circumscription that includes Germany, France and the Principality of Liechtenstein, as it happened already in 2008 and 2011.

The discussions focused on the financial crisis that UNAIDS is experiencing and the efforts to revitalize the Joint Program in order to reinforce its cohesion, its transparency and efficacy in its response to AIDS.

The most notable advances are in treatment access. In spite of that, the number of new infections has decreased only slightly in certain regions of the world, notably in oriental Europe, and the risk of infection by HIV remains particularly elevated among young women. The Principality of Monaco, has again emphasized over the importance of taking preventive measures, as the only way to stop the propagation of the epidemic.

“You can’t get AIDS from a hug or a handshake or a meal with a friend.” Magic Johnson