On Saturday, December 10, 2016, was the Gran Gala for Italian Business & Tourism Ambassadors of Monaco, at the Fairmont Hotel in the heart of the Principality, hosted by the Monaco Tourism & Congress Office. Over 230 prestigious Italian business entrepreneurs attended the Cocktail and Dinner with men and women elegantly dressed for the festive occasion. Prince Albert II took time from his busy agenda to attend the cocktail to the delight of the distinguished guests, among them Jean Castellini, Monaco Finance Minister, H.E. Robert Fillon, Ambassador of Monaco in Rome, and the Honorary Consul of Venice Licia Balzan Polegato, just to name a few.

This important project was born under the initiative of the DTC Director Guillaume Rose and Mr. Gianmarco Albani who has been representing the Principality in Italy during many years. 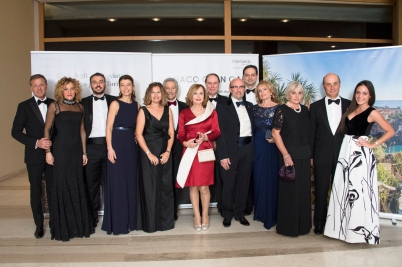 The highlight of the evening was a glamorous fashion show organized by the Chambre Monegasque de la Mode (CMM), whose Founder and President is Federica Nardoni Spinetta, with the valuable collaboration of Art Director Rosanna Trinchese and the team at Elevent / Rene Olivier Productions. In the photo below with HSH Prince Albert are Elizabeth Wessel, General Secretary of CMM, Federica Nardoni Spinetta, President and Founder of CMM, Rosanna Trinchese, Art Director for Monte-Carlo Fashion Week (MCFW), and Celina Lafuente de Lavotha, recently appointed as CMM Communications Attache.

A Fashion Gallery of the thirteen brands in the show, as well as the reputable Made-in-Italy Home Collection by Monica Vignolini welcomed the Gala’s guests, with champagne sponsored by Goldenergy.

The guests were entertained during the fashion show and after dinner by talented performers, French singer Lise Darly, singer-songwriter Emma Morton from Scotland and DJ Samantha Flores.

CMM organizes since 2013 the Monte-Carlo Fashion Week with the support of the Monaco Government, the Town Hall and the Tourist Office, with three days of conferences, fashion shows and social events offering the Monegasque brands and international designers a global visibility platform. Federica Nardoni Spinetta and her team are busy planning the next edition of MCFW scheduled from June 1-3, 2017, that will see several international designers present their latest collections resort-wear and swimwear and pre-collections pret-a-porter in the presence of buyers and international journalists. The Awards Ceremony and Gala Dinner will take place at the illustrious Oceanographic Museum of Monaco, while the Fashion Shows will be at the Fashion Village in Fontvieille transformed into a glamorous catwalk for the occasion.

“Fashion is about dreaming and making other people dream.” Donatella Versace