The best of the crop shared the podium

Navigators from the Yacht Club of Monaco (YCM), who have been competing throughout the world, were honoured by Club President HSH Prince Albert II on December 20, 2016, at the annual YCM Awards. There were two categories: YCM Youth Awards for youngsters competing in the Sports Section’s Optimist and Laser teams, and YCM Awards reserved for society members, owners/helmsmen, who have best represented the Club during the past season. 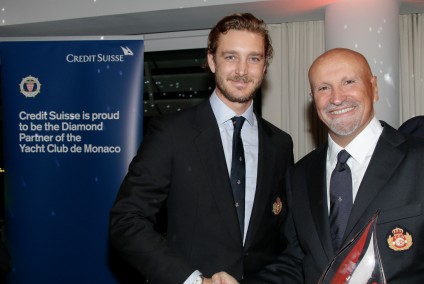 The 1,800 YCM members voted Italian Vincenzo Onorato as Sailor of the Year, Melges 32 European champion and winner of the Rolex Middle Sea Race 2016.

Onorato, his voice full of emotion, said: “2016 has been an extraordinary year as we achieved all our objectives, both in the Melges 32 and Swan. I’m looking forward to joining the J/70 fleet, my ambition being to compete at Key West Race Week in Florida. In total, 18 regattas await us on four different boats all over the world, and it will be an honur to compete under the Yacht Club de Monaco’s flag.”

Proof of how dynamic the Monegasque fleet really is, the owner of the prestigious Mascalzone Latino stable was competing with other YCM owner/helmsmen who also graced the podiums in 2016. They include Torbjorn Tornqvist, Guido Miani, Giangiacomo Serena di Lapigio, Oren Nataf and Stefano Roberti, European J/70 Vice-Champion.

New to the ceremony this year was a category for foils, the wing-like structure under the bow that makes boats literally take off. Maxime Nocher won the YCM Award for this category, against Pierre Casiraghi, nominated for his first season on the GC32 circuit with his team on Malizia, and Giovanni Soldini, winner of the Rolex Middle Sea Race on the Multi 70 Maserati,. The young kite surfer was crowned World Champion for the 10th time in the kite foil category, having also set a kite foil speed record for the Monaco-Calvi crossing this year.

In line with the Yacht Club de Monaco’s sports policy, this ceremony celebrates achievements among our younger members. It was an opportunity to salute the season of Monegasque Jérémy Moutout, currently first in the annual Europa Cup ranking after 20 stages. Another winner this evening was Simon Maltsev, who finished his ninth season on Optimists and is set to tackle the Nacra 15 class in 2017, proof of how willing the YCM is to adapt to changes in modern sailing.

It was an evening that brought families together at the Club and welcomed 30 new society members, and was an opportunity to present the 2017 race calendar, with highlights including:

HSH Prince Albert II concluded: “As 2017 dawns, my wish for the new year is to encourage boldness, exploring new paths, the ambition to take on new projects and the simple pleasure of being together.”

And it’s a year that already has its heels in the starting blocks, with a double event on the weekend of 13-15 January: the Monaco Optimist Team Race for youngsters from foreign clubs and Monaco Sportsboat Winter Series, the monthly winter one-design meetings in the Principality.

“To reach a port we must set sail – Sail, not tie an anchor. Sail, not drift.” Franklin D. Roosevelt