Opening the clay season in Europe 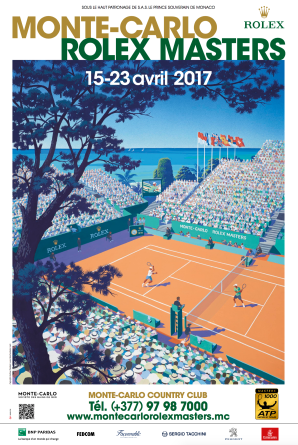 On Thursday, February 9, 2017 in the Salon America of the Monte-Carlo Bay Hotel, Zeljko Franulovic, Tournament Director extraordinaire presented to the international press the program for the upcoming Monte-Carlo Rolex Masters (MCRM), organized by the S.M.E.T.T. on the celebrated clay courts of the Monte-Carlo Country Club from April 15-23, 2017. It is the first European tournament of the prestigious category ATP World Tour Masters 1000. Together with the Grand Prix Formula 1, it is one of the highly anticipated events of the Principality, for more than a century.

After unveiling a new logo and a new graphic identity that illustrate the very close links between the competition and its main sponsor Rolex, Zeljko Franulovic presented the official poster (see photo left) designed by the 8th year in a row by English artist Andrew Davidson.

The tournament director  emphasized that the 110th edition of the MCRM in 2016 “had beaten a new frequentation record with 135.652 spectators, and the participation of 8 of the 10 top world players”. The defining moment of the week was the final between Spaniard Rafael Nadal and Gaël Monfils, the first French player to reach the tournament final after Cedric Pioline in 2000. For his 100th final, the 10th at the Monte-Carlo Rolex Masters, the Spaniard added his 9th crown in the Principality.

Even if the definitive list of 45 players in the final table will not be known until the official ATP registration deadline on March 22, 2017, it promises to be exceptional. We confirm that Spaniard Rafael Nadal was the first to enter as well as the Monegasque resident Serbian Novak Djokovic.

It will be a busy week, not only at the courts level but also on the bleachers, with plenty of entertainment for all ages, including the Children’s Day on Sunday, April 17, and the traditional highly anticipated Grand Night of Tennis on Friday, April 21, 2017.

Among the latest innovations is the final table Draw that will take place on Friday, April 14 at 18:30 (instead of Saturday) at the Exotic Garden of Monaco, as well as a charity exhibition organized on Saturday, April 15 for the benefit of Amade Mondiale Monaco, presided by HSH Princess Caroline of Hanover.

“Every forecast predicts that Court Rainier III (central court), Court des Princes and all the other adjacent courts will be complete several days. In reality, we are largely over our results from at the same time last year”, declared Zeljko Franulovic; while emphasizing that: “like precedent years we will keep some tickets for sale in the counter each day”.

Tennis fans mark your calendars for the Monte-Carlo Rolex Masters from April 15-23, 2017 at the legendary Monte-Carlo Country Club, to watch the world best tennis players in Singles and Doubles battle on clay for the most coveted trophies!

“What is the single most important quality in a tennis champion? I would have to say desire, staying in there and winning matches when you are not playing that well.” John McEnroe