Hilde Haneuse Heye, Founder and Honorary President of Femmes Leaders Monaco made a presentation on the French Speaking Writing Contest she created with women in the association, entitled “Aux Coeurs des Mots”. Isabelle Bonnal, Director of the Department of National Education, Youth and Sports took the stage to convey the strong and continuous support of the Government of the Principality for initiatives that create awareness in favor of access to education for girls everywhere. (On the photo Hilde Heye and Isabelle Bonnal @CelinaLafuentedeLavotha)

Also present at the event were distinguished personalities from Monaco and abroad as Stephane Valeri, Minister of Health and Social Affairs, Patrice Cellario, Minister of Interior, Anne Marie Boisbouvier-Ancian Advisor to HSH Prince Albert II, Marina and Jean Kerwat, Honorary Consul of Croatia in Monaco, Claude Eude Honorary Consul of Latvia, Rina Spence Honorary Consul of Monaco in Boston, Patrick Medecin Ambassador of Monaco to Japan and India and his wife, representatives from Monaco’s National Council and the Town Hall, and Marc Oberon from Lecode who made the film possible, just to name a few. Students from the Lycée Technique et Hotelier de Monte-Carlo, including those who will participate in the 2nd edition of the contest, plus loyal supporters filled the room to capacity for this solidarity event. 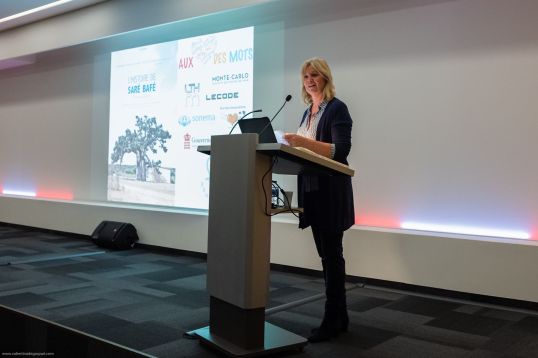 The children who wrote the tale also play in the film, together with their French teacher, something they had never done before! In a simple way they convey the message of their understanding for the need to guarantee access to education to girls as their deserved right.

Monaco photographer and member of FLMM, Valentina Gaspari Louppe  was in Senegal and prepared a video of the making of the film, that you can watch here:

The winning story was selected by a talented jury presided by Marjane Satrapi, and highly accomplished personalities: André Azoulay, Michèle Cotta, Brigitte Fossey, Antoine de Maximy, Thierry Dusautoir, Catherine Maunoury, Patrick Poivre d’Arvor, Aldo Romano, Jacques Salomé, Philippe Streiff and Bernard Werber. It was not an easy task because each school produced an interesting tale but only one could receive the first prize.

The winners of the international writing contest organised by Femmes Leaders Monaco, “Aux Coeurs des Mots”, with the participation of more than 400 children from 19 countries in 3 continents during their 2012-2013 school year under the theme “Les enfants du monde racontent” (The children of the world tell their story). The first edition was sponsored by the Organisation Internationale de la Francophonie (OIF), under Secretary General, Abdou Diouf, and the High Patronage of HSH Prince Albert II of Monaco. The book Aux Coeurs des Mots gathers all the stories from the participating countries.

Because for the women in this association not even the sky is the limit, they persevered and the the winning story was made into a film to bring forward the important message from the children even further. Their message is loud and clear: Educating both girls and boys guarantees a brighter future and the advancement of society!

The Awards Ceremony will take place in Monaco on Friday, October 20, 2017, in the presence of HSH Prince Albert II, loyal supporter of this initiative. The FLMM association is actively searching for generous sponsors to provide books and gifts for the children.

FLMM has launched the 2nd edition of the contest under the theme Femmes en Lumiere (Highlighting Women), under the High Patronage of HSH Prince Albert II and the support of HE Mme Michaelle Jean, present General Secretary of OIF. The objective is for youngsters to highlight the role and work of women and recognize their central place in society.

Each class of 14 to 17 year-olds boys and girls, from 30 countries (Monaco included) in 4 continents, need to identify an exceptional woman that works in the shadows and bring her to the spotlight. A woman who has a notable impact and succeeded in conquering challenges within a complex context, in a difficult environment in the domain of education, conflict management and achieving peace, justice and rights of men and women, youth, seniors, health, research, economy, agriculture, culture or art in general, except politics. The students will make an interview and will then write a portrait of that woman. The contest again is based on objective Nbr. 3 of the 8 UN millennium objectives: to promote the equality of sexes and the empowerment of women.

As in the previous contest the participating students will be able to communicate through the Omnispace platform of intercultural exchange, a communication tool without frontiers, making this a project of peace and tolerance.

Created in 2010 by Hilde Haneuse Heye and her friends Femmes Leaders Mondiales Monaco is affiliated to Femmes Leaders Mondiales presided by Nicole Barbin with branches in a dozen countries since 2000. The association counts with more than 70 members and Chantal Ravera is the new President since 2016, while Hilde Heye remains as Honorary President.

Their mission is to promote and defend the place of Woman in society in all the domains: social, economic, cultural and politic and most importantly the equality of rights between men and women. Carry out actions with the objective to change the way of thinking, highlight women, either on the national and/or international arena, and promote solidarity among women in difficult or dangerous situations. In the six years since its inception several commissions have been created to advance the goals of the association: Women & Violence, Women in Prison, Women & Medicine, Highlighting Women.

Ban Ki Moon from South Korea, who was the United Nations General Secretary from 2007 through 2016 (now replaced by Portuguese Antonio Guterres), said “Equality between women and men is an advantage for all, and we have everything to win enabling women and girls to reach their potential.”

“The more I traveled and met with girls and learned from experts about this issue, the more I realized that the barrier to girls’ education isn’t just resources. It’s also about attitudes and beliefs – the belief that girls simply aren’t worthy of an education; that women should have no role outside the home; that their bodies aren’t their own, their minds don’t really matter, and their voices simply shouldn’t be heard.” Michelle Obama