Protecting our oceans to safeguard our ecosystem

The Monaco Ocean Week (MOW) run from March 30 through April 4, 2017, organized in collaboration with the Prince Albert II of Monaco Foundation, the Government of Monaco, the Oceanographic Institute, The Scientific Center of Monaco, the Yacht Club of Monaco, under the sponsorship of Rolex.

MOW was launched with a press conference on March 21, 2017, at the Yacht Club of Monaco, with interesting presentations by important personalities in the Principality concerned about the health of our ocean: Bernard Fautrier, Vice President of the Prince Albert II of Monaco Foundation; Marie Pierre Gramaglia, Minister of Environment and Urbanism; Robert Calcagno, General Director of the Oceanographic Institute and Bernard d’Alesandri, General Director of the Yacht Club of Monaco and Dennis Allemand, Director of the Monaco  Scientific Center (CSM). 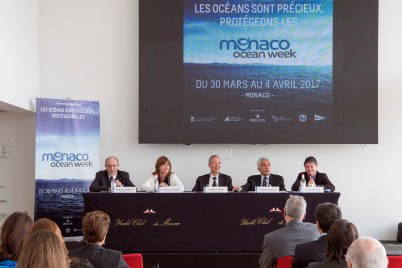 Launching of the Monaco Ocean Week at the Yacht Club of Monaco @M. Dagnino MOM

HSH Prince Albert II is firmly committed to the protection of our oceans to safeguard our ecosystem, following in the footsteps of visionary Prince Albert I, the first who understood the importance of the sea, and the need to improve the relationship between humanity and the ocean.

From March 30 through April 4, several events in the form of ateliers, workshops, exhibitions and exclusive film screenings, were organized in the Principality, to create awareness about the sustainable management of the oceans. Many important actors from the scientific community and international organizations participated during an intense week of interaction and mobilization for ocean conservation.

Monaco at the forefront of clean energy

On Thursday, March 30, Bernard d’Alessandri Marco Casiraghi, the man behind the project, presented the Monaco Solar & Electric Boat Challenge scheduled from 13-15 July 2017. During the past four years, the Yacht Club de Monaco has been giving space to energy sources of the future by hosting a meeting for solar and electric powered boats. 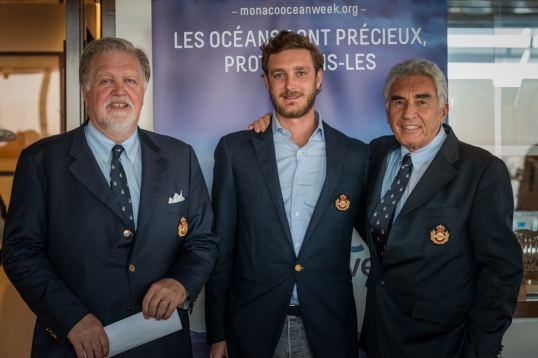 Organised in collaboration with the  Union Internationale Motonautique (UIM) and the Prince Albert II of Monaco Foundation, this event is a chance for engineering students to express their talent and imagination working outside the box. These are youngsters determined to put the event on the map, as a benchmark to raise public awareness of clean modern technologies in the battle against climate change. Unique in the Mediterranean it is the first and only competition to bring together on the open sea, in one race area, solar and electric powered race boats. An endurance fleet race, timed slalom and one-on-one duels are again on the program this year, testing boats beyond their limits.

“The Yacht Club de Monaco wants to build the future with this dynamic new generation of engineers who are enthusiastic and motivated to design and build the motorboats of tomorrow. It is very much in line with HSH Prince Albert II’s environmental policy. A reminder that over a century ago other pioneers came to Monaco to present their latest powerboat developments – a tradition that continues today,” said Bernard d’Alessandri.

For the first time since its launch, the event includes a 25-nautical-mile offshore course between Cannes and Monaco for a new class of boat, the YCM Offshore Class. Brainchild of the Yacht Club de Monaco, the boats will be breaking new ground in being able to take three people on board. “With this new class, the ambition is to encourage universities and boatyards to design and build solar and electric race boats that can be marketed and sold in the future,” explains Marco Casiraghi, himself an engineer and the man behind the project.

Mark your calendars for the Monaco Solar & Electric Boat Challenge, from 13-15 July 2017, when the Principality once again opens a trail for the future of yachting.

The RAMOGE zone covers the maritime zones of the Provence-Alpes-Cote d’Azur, the Monaco Principality and the Liguria regions, forming a pilot area for the prevention and fight against marine pollution. It represents an instrument of scientific, technical, juridical an administrative multidisciplinary cooperation, where the French, Monegasque and Italian governments put into place concrete actions for an integral collaborative management of the coastal areas. It was back in 1970 in the occasion of the plenary assembly of the International Commission for Scientific Exploration of the Mediterranean (CIESM), that Prince Rainier III of Monaco, announced his firm desire to put into place a pilot zone that would constitute a laboratory of ideas dealing with protection of the marine environment. In more than forty years of cooperative administration, RAMOGE has gained very solid experience in the fulfillment of their three main objectives: The fight against marine and coastline pollution, the protection of biodiversity and education and communication.

On Friday, March 31, 2017, the Oceanographic Institute, in partnership with the International Union for Conservation of Nature (IUCN), hosted the private screening of the Documentary Vamizi, Cradle of Coral, in the presence of its director Mattias Klum.

Vamizi Atoll, northern Mozambique, is one of the last coastal ecosystems spared by the civil war. Over 180 species of coral and 300 of fish prosper there, threatened however by illegal fishing and oil projects. The local community, assisted in particular by IUCN and WWF, is moving towards sustainable development of this ecotourism-based territory in order to resist pressure.

Plastic pollution is a global issue that impacts our ocean, our health and our wellbeing. Through education and science we need to work together to reverse the situation. Helping consumers to become plastic literates, so they can make informed decisions, to curve the use of existing plastic and demand environmentally sensitive products and solutions.

Five organisations, the Prince Albert II of Monaco Foundation, Surfrider Foundation Europe, Tara Expeditions Foundation, Mava Foundation and the International Union for Conservation of Nature (IUCN), joined forces to create an international platform dedicated to research and implementation of solutions against plastic pollution in the Mediterranean Sea. Together they created a task force named “Beyond plastic Med” or BeMed, with the goal to create public awareness and a call for concrete actions.

BeMed launched an appeal for micro-initiatives in January 2017 concerning the ensemble of countries in the Mediterranean basin, with the objective to support financially local projects towards reducing plastic pollution on the coast or the sea. Eleven projects from Greece, Italy, Turkey, Cyprus, Lebanon, Tunisia and Montenegro were recognized in Monaco on March 30, with the framework of the Monaco Ocean Week, in the presence of HSH Prince Albert II.

The main objective of the different projects is to evaluate the situation regarding utilization and elimination of plastic materials and limit their use by offering better alternative solutions. Create awareness among the population of all ages, fishermen and merchants about plastic pollution, how to protect beaches and coastal areas by organizing collection, cleaning and recycling campaigns.

The BeMed project award winners are:

In the photo below HSH Prince Albert II is surrounded by the BeMed award winners at Stars N’Bars. 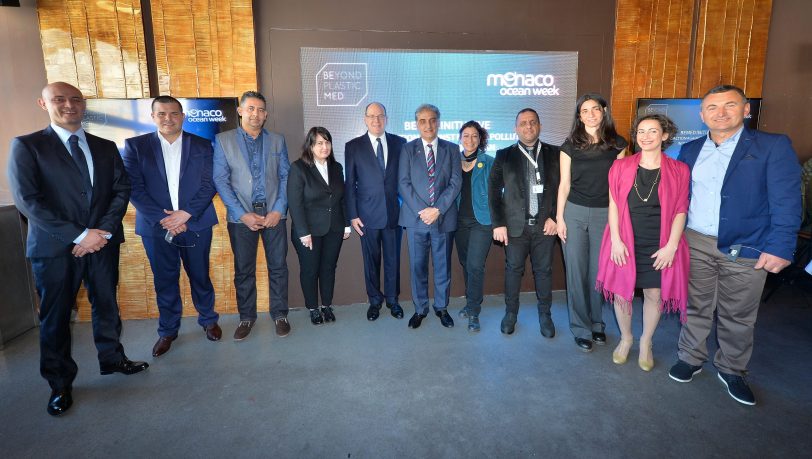 Parallel to the Ocean Week the The Animal Fund (TAF) association, in partnership with the Ecole Blue of Pierre Frolla, organized a campaign on Saturday, April 1, on the Larvotto Beach in Monaco, to create awareness about the danger of plastic pollution in our oceans.

Around a hundred people including many young children participated in the workshop organized by TAF, a new Monegasque organization that battles for the protection of marine mammals against the dangers around them like pollution, overfishing and massacres. In doing that they take care of the oceans. “One of our objectives is to limit plastic garbage that end up in the oceans and that the mammals ingest, that is often the cause of them grounding on the coasts”, explained TAF President Berit Nielsen Legrand.

In Monaco as in France, plastic bags are forbidden, and hopefully in the near future the same will happen to plastic bottles. Berit added: “A bottle takes around 450 years to disintegrate, and the caps are the plastic objects that infest the ocean, so we could do without them.” She is right when she recommends drinking tap water that in Monaco is of high quality. Berit wants to extend her association around the world and work with schools to pass the message of the association to defend the oceans and its marine mammals.

Signature of the Pelagos Agreement in Monaco

On Monday April 3, 2017, the Minister of State of Monaco hosted the Ceremony of the Signature of the Pelagos Agreement, in the presence of HSH Prince Albert II and the Environment Ministers of France and Italy, Segolene Royal and Gian Luca Galletti, that enables the recognition of juridical status of the Permanent Secretariat of Pelagos in the Principality.

The Pelagos Agreement, signed by France, Italy and Monaco on November 25, 1999, in Rome, relates to the creation of a Sanctuary to protect marine mammals and their habitat from all the anthropogenic dangers (relating to or resulting from the influence of human beings on nature). The Sanctuary constitutes a pilot zone of the Agreement on the Conservation of cetacean species in the Black Sea, the Mediterranean and the adjacent Mediterranean zone (ACCOBAMS). The Pelagos Sanctuary is the only international marine protected area dedicated to the protection of marine mammals, in the Mediterranean. Thanks to the particular hydrologic conditions, this marine space of 87,500 km2 presents an immense biological wealth where numerous cetacean species live together.

Creating a symphony with whales

In the occasion of the ceremony of the signature of the Pelagos Agreement, a public conference about the marine mammals was organised about the marine mammals Sanctuary at the Oceanographic Museum of Monaco, followed by the show “Baleine et contrebasse” (Whale & Bass) of Bernard Abeille. The musician creates a real symphony with his centennial Bass that recreates the singing of the whales.

The 8th edition of the Monaco Blue Initiative (MBI) took place from April 2-3, 2017 in Monaco. MBI is an international scientific, economy, politics and charity organization think-tank of experts who share a joint commitment for sustainable ocean management and conservation.

The upcoming high-profile UN Ocean Conference to Support the Implementation of Sustainable Development Goal No. 14: Conserve and sustainably use the oceans, seas and marine resources for sustainable development will be convened in at the UN Headquarters in New York from June 5-9, 2017, coinciding with World Oceans Day.

The Governments of Fiji and Sweden will be co-hosting the conference that aims to be the game changer to reverse ocean health decline for the people, the planet and the future, with concrete solutions. This important conference will measure the member States active involvement in the UN Goal No.14.

Over the past 7 years the MBI has already identified the path towards collective commitment of the scientific community, decision makers and economic players in order to improve the relationship between humanity and the ocean. It promotes reflection and stimulates action for ocean management thus preserving the proper functioning of our ecosystem. The 2017 edition covered the major current challenges, from coastlines to the High Seas, exploitation management, fishing and aquaculture, anti-pollution measures and the universal threat of global warming. The balanced approach to the management of activities and the development of Marine Protected Areas formed the core of the discussions.

On Tuesday, April 4, HSH Prince Albert II launched the 2017/2020 Monaco Explorations campaign at the Oceanographic Museum, renewing, 120 years later, the scientific explorations initiated by his great-grandfather Prince Albert I. The Yersin, ecological research vessel sailing under Monegasque flag, will depart in August from the Port of Monaco, to follow a longitudinal route between the Tropics, for a 36 months long voyage around the world.

A Scientific Orientation Committee, composed of ten internationally renowned scientists, will select the programs and ensure the choice of projects that will become the base of this exploration campaign. Science will be the fundamental component of this initiative that will be complemented by actions of public awareness, communication and mediation.

“The greatest threat to our planet is the belief that someone else will save it.” Robert Swan OBE