Enjoying a fun exhibition for a great cause 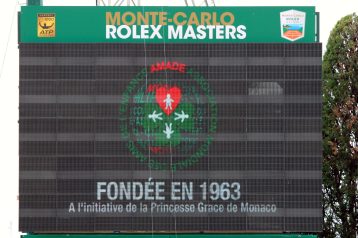 This Saturday, the first day of the Monte-Carlo Rolex Masters, was ultra special, as parallel to the qualification matches, there was a charity exhibition on court Rainier III (central court) benefiting the association AMADE Mondiale Monaco. Funded in 1963 at the initiative of Princess Grace of Monaco, and presided by HRH Princess Caroline of Hanover, AMADE is based on a vision of a world where every child, no matter his or her social, religious or cultural differences, has the right to live with dignity and security.

Former tennis player Swede Jonas Bjorkman, new coach for Croatian Marin Cilic, joined forces with former Croatian tennis champion Goran Ivanisevic, new coach for Czech Tomas Berdych, and organized a ludic exhibition with: Novak Djokovic (N°2), Dominic Thiem (N8), Marin Cilic (N°9), David Goffin (N°12), Grigor Dimitrov (N°13),  Thomas Berdych (N°14), Alexander Zverev (N°20) and his brother Mischa (N°33). Coaches and players wore mikes so you could hear them while playing in in incredible combinations of 4 against 4, or even 7 against 1 that was the funniest of them all, making the public burst into laughter and cheer effusively.

Watching pros practice and others go through qualifiers

Results for the Qualifying matches

“From what we get, we can make a living; what we give, however, makes a life.” Arthur Ashe