First round matches got to a good start

The first matches of the main draw kicked off on Court Rainier III on a sunny and warm Easter Sunday at the Monte-Carlo Rolex Masters. Belgian David Goffin (10th seed), French Gilles Simon and Portuguese Joao Sousa, all passed to the second round by defeating their opponents in two straight sets in matches that lasted over an hour. Simon will now face second seed Novak Djokovic. In doubles, Fabio Fognini and Stan Wawrinka claimed victory against Max Mirnyi and Daniel Nestor in front of a full stadium. 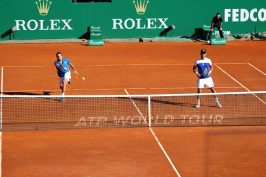 It was Easter Sunday and also Children’s Day at the Monte-Carlo Rolex Masters with many activities for the young ones: Design contest, Service Speed, Tennis workshops, virtual tennis competitions, autographs sessions and more. As it is a tradition the organisers offered a tour of the Monte-Carlo Rolex Masters to a group of ticket holders of all ages. 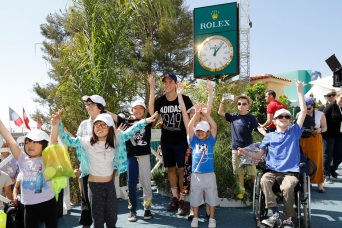 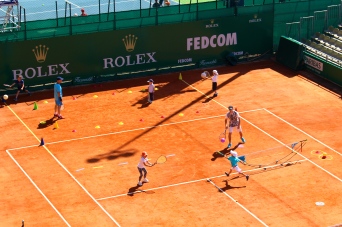 Top seeds open up to the media 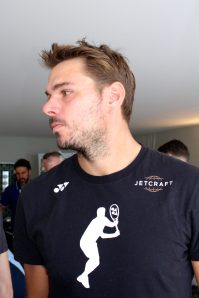 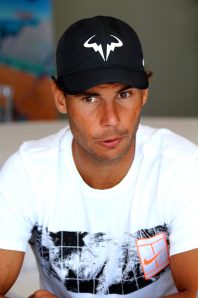 Rafael Nadal: “I never speak with my clan of a possible decimal (10th crown) in Monte-Carlo, for me it’s an important event, one of my favorites of the year, and it is unique. I am just having fun here, enjoying, trying to work as much as I can to be ready for the competition and to adjust my game again for clay. I only focus on that. I started the year very well and I am in a good mood to tackle this historic tournament.”

Jo-Wilfred Tsonga: “I am a happy man, everything is going great and I am happy to be back after the birth of my son Shugar. But I have new responsibilities and I no longer play only for me but for my little family, and both my wife Noura and my son are with me in Monte-Carlo. It is tough to leave them at home. This tournament is perfect for my comeback, with quality clay courts, and conditions similar to Roland Garros.”

Andy Murray: “I feel much more comfortable moving on clay now than I used to. I spent lots of time in 2014 and 2015 working on my legs’ movement on this surface.  My elbow feels much better. I can almost serve at my average speed. I am looking forward to playing here though my expectations might be a bit lower than last year considering my injury, but I have the intention to do well during the clay season.”

Novak Djokovic: “I feel good. It’s a pleasure to be able in what I call my home town, the place where I spend most of time while not playing and it is also my training ground. It is true that the first trimester of 2017 did not go as expected, but it is normal for a sportsman to have highs and lows, but I have confidence in myself and my capabilities and in the effort that I put in every reconstruction process. I only need to have faith that the process will give good results sooner or later. All my thoughts are concentrated on this week in Monte-Carlo and I hope it will be the place for a new beginning.”

Stan Wawrinka: “I feel good. I’ve arrived here on Friday and am satisfied with my training sessions. I am very excited to get back on clay, a surface that I’ve always enjoyed. I always love coming back here. The Monte-Carlo Rolex Masters is a tournament I’ve always liked, the first one on clay. Besides, it’s the first Masters 1000 that I won so it has a special place in my heart.”

“I play each point like my life depends on it.” Rafael Nadal