Berdych & Zverev rushed to 2nd round, Tsonga celebrated his birthday & Djokovic debuts on Tuesday in Monte-Carlo

Easter Monday was sunny and the fans packed the Monte-Carlo Rolex Masters. The program on court Rainier III started with the victory by Uruguayan Pablo Cuevas who disposed of Serbian Viktor Troicki in two straight sets. Young gun Alexander Zverev defeated experienced Italian Andreas Seppi, who was the crowd favorite, in two powerful sets 6-1, 6-2. “I like playing on clay. It’s the surface I grew up on. You know, in Europe, you play most of the season on clay. I actually don’t know what my favourite surface is, and I don’t actually have a least favourite surface. It more depends on how I play during the time. It more depends on which form I’m in, more than the surface actually,” said Zverev.

Another Italian, Fabio Fognini, was ousted in three sets by Spaniard Pablo Carreno Busta, the N°13 seed. Fognini, the wonderful colorful player fought hard but his characteristic swagger did not help him this time, as he lost control of the match with his usual bad-boy antics. And for the last match on center court Czech Tomas Berdych who is seeded 9 defeated Russian Andrey Kuznetsov in three sets, playing his best while encouraged by his model wife Ester Satorova and his new coach Croatian Goran Ivanisevic. 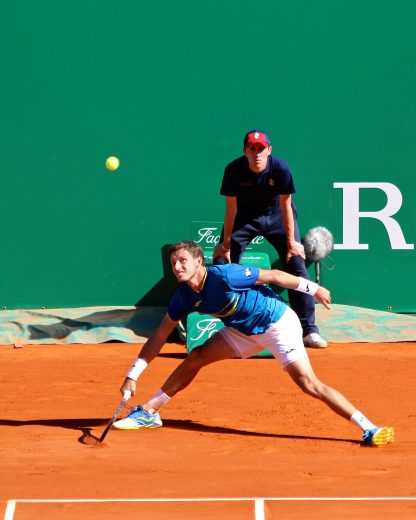 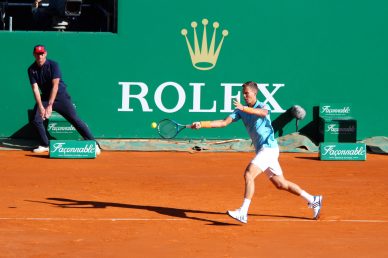 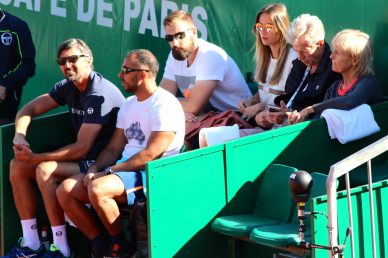 On Court des Princes, Spaniard Roberto Bautista Agut won in three sets over Nikoloz Basilashvili. Another Spaniard Albert Ramos-Vinolas ousted Renzo Olivo in two straight sets, finishing the dream of the Argentine who looked promising after playing a great qualifying match on Sunday. Kyle Edmund won an all-British battle against Daniel Evans in two straight sets in 80 minutes. “It’s a good opportunity for me. I’ve never played Rafa. I mean, this tournament, as well, is such a successful tournament for him, winning nine times. He obviously loves playing here, he is very comfortable with the conditions. So, for me, it will be a great opportunity. It’s another Top 10 opportunity for me. I like the clay. I’ve been getting better on it over the past few days,” said Edmund in his interview after the match. He will next challenge fourth seed and nine-time champion Rafael Nadal, who has a 58-4 record at this event.

On Court No. 2 Argentine Diego Schwartzman defeated experienced Australian Bernard Tomic in two straight sets against all odds. Qualifier Adrian Mannarino celebrated his first victory in the main draw of the Monte-Carlo Rolex Masters bating clay-court expert Guillermo Garcia Lopez. The Spaniard had wrapped the first set 6-1 but the left-handed Frenchman leveled up his game to go and win the next two sets. He will meet his former role model Jo-Wilfried Tsonga next in an all-French battle.

Tuesday will be the debut of the the two time Monte-Carlo Rolex Masters champion, Novak Djokovic who will face French Gilles Simon. The world No. 2, who has just recovered from an elbow injury, is hoping to make a new start of his season at the Monte-Carlo Country Club, which he calls his training camp.

French favorite Jo-Wilfried Tsonga chose the Monte-Carlo Rolex Masters for his come back after becoming a father to his son Shugar last month, and to celebrate his 32nd birthday. Lenotre, the official catering company of the tournament, presented Jo with a chocolate cake. (In the photo Birthday boy Jo-Wilfriend Tsonga @Photo Realis)

Tuesday will be an important day for the French as around seven players will be battling on the courts of the Monte-Carlo Country Club, where young and talented Lucas Pouille will face American Ryan Harrison on court Rainier III. Then it will be a 100% blue duel between Jo-Wilfried Tsonga and Adrian Mannarino. A third highly anticipated match will be between World No. 2 the Serb Novak Djokovic and Gilles Simon. On other courts French Benoit Paire will face Tommy Haas, and Jeremy Chardy will meet Borna Coric. Allez les Bleus!

One thought on “Berdych & Zverev rushed to 2nd round, Tsonga celebrated his birthday & Djokovic debuts on Tuesday in Monte-Carlo”