Rafael Nadal won his 10th crown confirming he is the king of clay and Monte-Carlo is his castle!

The 111th edition of the Monte-Carlo Rolex Masters culminated on Sunday, April 23, 2017, with the victory of 30-year-old Spaniard Rafael Nadal who claimed his 10th title on Court Rainier III of the legendary Monte-Carlo Country Club, by defeating the 24th ranked countryman Albert Ramos-Vinolas in two straight sets 6-1, 6-3 in 1 hour and 16 minutes.

Ramos Vinolas had previously ousted world No. 1 Andy Murray, and No. 8 Marin Cilic in the quarters, and No. 17 Lucas Pouille in the semis. But the hopeful Spaniard was somewhat overwhelmed by the occasion, playing in his first ATP Masters 1000 final in a packed Court Rainier III, and was not able to develop his game to the fullest, overpowered by the defending champion who was determined to add another trophy to his extensive collection.

Rafael Nadal became the first man in the Open Era to win 10 tournament titles and 50 career clay court titles. It was also his 70th career ATP World Tour level title and 29th ATP Masters 1000 victory. Rafa proved once more he is the king of clay and Monte-Carlo is his castle!

The Ball girls forming the 1 and the ball boys forming the 0, for the 10th crown won by Rafael Nadal in Monte-Carlo @CelinaLaufuentedeLavotha

A very emotional Rafael Nadal said after the match: “It is incredible, no? To win an event like the Monte-Carlo Rolex Masters 10 times, it is difficult to express what I feel. Each year there are different feelings, but each time I get this trophy I experience a unique moment. This victory is due to chance, a mix of things that enabled me to conquer this 10th title. I have the chance to be able to play tennis, to have been in good health all those years and participate in one of the most prestigious tournaments of the year. I am really happy to win it once more. This is one of the most beautiful days of my carrier. “ 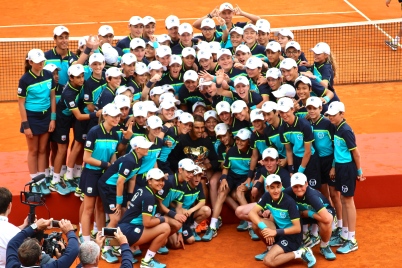 In the doubles final the duo Rohan Bopanna from India and Pablo Cuevas from Uruguay playing for the first time this year, beat the Spanish pair of Feliciano Lopez and Marc Lopez in a decisive tie break after each team won a set 6-3, 3-6, 10-4. Fans were branding flags from India and specially Uruguay, proud of their countryman’s victory. During the prize ceremony both teams praised their opponents for having a great week in Monte-Carlo, confirming their ready for the upcoming clay season tournaments. 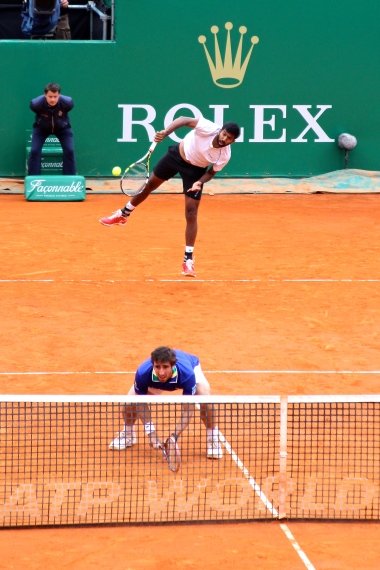 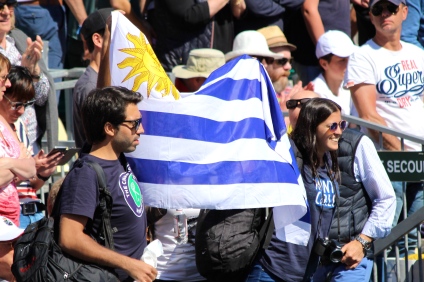 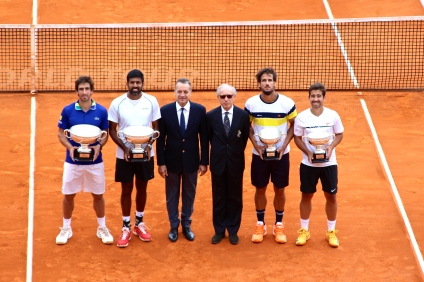 Prize won by Winners and Finalists

The best photos by talented photographers

The traditional annual photo competition award ceremony took place in the VIP Village. Alain Manigley, Administrative President of S.M.E.T.T., who organizes this contest for the 8th year in a row, presented the prizes recognizing the best pictures taken by accredited photographers during last year’s 110th edition of the Monte-Carlo Rolex Masters. In the photo below the photographers who received awards and whose photos were selected for the book of last year’s tournament, from left to right: Olivier Anrigo – Sebastien Nogier – Valérie Hache – Chryslene Caillaud – Claudia Albuquerque – Antoine Couvercelle – Celina Lafuente de Lavotha – Neal Simpson – Brigitte Grassotti – Patrick Gauthey et Tajima Tadashi. Two other photographers Lijian Zhang and Erika Tanaka were also recognised with awards but they do not appear in the photo. 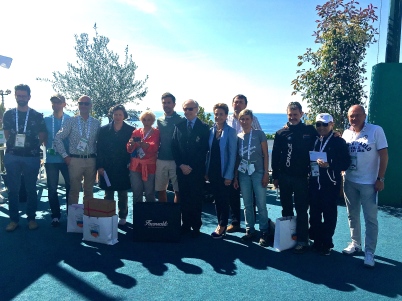 This year’s book represent the “Best of” of the 2016 tournament and it is consider a “collector’s item” for the quality of the photos that are reproduced. The book is a tribute to all professional photographers who communicate, through their telephoto lenses, their undeniable passion for the sport, and tennis in particular. The talent of each photographer has allowed to select over 280 remarkable shots that beautifully illustrate the 88 pages of the “collectors” book, retracing day by day the highlights of the competition. The tournament committee is sincerely grateful to the 20 artistic photographers and dedicates the book to them, as they make it possible that the best souvenirs of this week in April will never vanish.

The charming hostesses of the loges MCRM17@CelinaLafuentedeLavotha

Mark your calendars for 112th edition of Monte-Carlo Rolex Masters 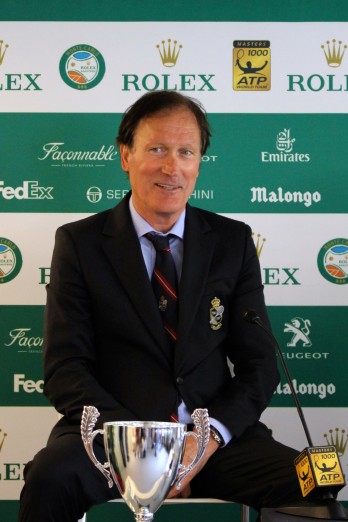 Zeljko Franulovic presented a balance of the 111th edition of the Masters 1000 in Monte-Carlo on Sunday morning, starting with the main Draw that took place in the emblematic Jardin Exotique of Monaco in the presence of defending champion Rafael Nadal. The director had the pleasure to announce a new attendance record of 135.809 spectators, with 453 accredited media representing 18 countries.

This new edition attracted once again the best players in the world, including Nos. 1, 2 and 3, who played under perfect weather conditions. The director gave a special mention to the Monegasque double pair of Romain Arneodo and Hugo Nys, players trained under the umbrella of the Monaco Tennis Federation, who has an excellent week and reached the semifinals.

Franulovic praised the 8 top players who participated in the charity exhibition organized to benefit AMADE (Association Mondiale des Amis de l’Enfance), presided by HRH Princess Caroline de Hanover. The original format of this event delighted the spectators on central court. A fun exhibition for a great cause!

The 112th edition of the Monte-Carlo Rolex Masters will take place from April 14-22, 2018. Mark your calendars!

One thought on “Rafael Nadal won his 10th crown confirming he is the king of clay and Monte-Carlo is his castle!”