Buemi claimed victory in the streets of the Principality

Last Saturday, May 13, 2017, Sebastien Buemi had to support the tremendous pressure from Lucas di Grassi to finally claim his fourth FIA Formula E Championship victory of the season in the second electrical race in Monaco, extending his points lead to 15. From his first Julius Baer pole position of the season, Buemi made a perfect start and soon established a safe spearhead over his title rival, w ho in turn was putting some distance from Nelson Piquet Jr. in third.

A view of the Monaco circuit during the E-Race, Saturday, May 13, 2017 @CelinaLafuentedeLavotha 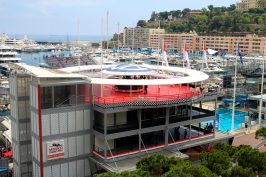 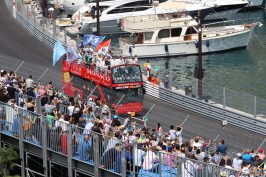 The NextEV NIO driver had no such luxury, as the TECHEETAH of Jean-Eric Vergne was swarming all over him. The Frenchman was clearly anxious to make a move and stop the front two from getting away, and in his desperation, he tried an ambitious move around the outside of the Turn 3 hairpin. The cars were completely side-by-side and as they banged wheels Vergne was sent crashing into the Tech-Pro barriers. Remarkably Piquet survived having only lost third place to the Mahindra of Nick Heidfeld, but Vergne’s car was heavily damaged and the Qualcomm Safety Car was deployed as it was recovered.

After the success of the ABT Schaeffler Audi Sport’s tactical gamble in pitting di Grassi early last time out in Mexico, all the teams opted to follow the Brazilian into the pits for the mandatory car change during the caution period.

This was the prelude to a sensational finish where more than 18,000 fans packing the grandstands were on the edge of their seats. After using his FanBoost to briefly open up the lead to 1.6s, Buemi could only watch his mirrors as di Grassi homed in over the closing stages.

As they crossed the line to start the 51st and final lap, Buemi’s lead was down to just 0.4s, but despite having the leader in his sights, di Grassi couldn’t quite get close enough to attempt a passing move, and Buemi duly notched up his 10th win in the all-electric racing series, defending his Monaco ePrix crown in the process.

Buemi said: “In the first stint I managed to pull a little gap, but Lucas was using a bit less energy than me. When the safety car came out we knew we had to try to learn from them [ABT] after what they have done in Hong Kong and Mexico by stopping very early, so that was the right call and then we knew it was going to be very difficult because to finish we would have to save quite a lot of energy. I managed to build a bit of a gap just to be safe and he played with me a bit because when we were passing the guys who were a lap down he consumed a little bit more than expected so I had to do the same. Then he did two laps where he kind of backed off, which was good for me, but in the end we both finished with nothing left.”

Second place for di Grassi meant that he minimised the amount of points lost to his main title rival – in fact the championship already appears to be a two-horse race as there is more than a 40-point gap to Buemi’s Renault e.dams team-mate Nico Prost who’s third in the standings. Di Grassi said: “On the first stint the pace was not really there, but we were saving much more energy. In the second stint I was trying to keep up with him. I had around one per cent more than him, so I knew if I had the right strategy I could attack him in the end. The problem is here in Monaco there is nowhere to overtake and if you’re an experienced guy like Seb you know how to close the door. Also, I would never go for a gap where you cannot overtake or I would risk all the race. If he’d left any door open, or any of the straights were longer than 360 metres, for sure I would have had a go.”

Now the FIA Formula E Championship returns with the Qatar Airways Paris ePrix on May 20. Last year di Grassi won the race to re-invigorate his title charge, and it will be a classic not to be missed!

The advances in Formula E technology mean that not only are the cars faster this year than they were in season one when the first Monaco ePrix was held, the races are now significantly longer. Indeed, the race in Monaco was a full four laps longer than the 47 it was run over first time around.

Supermodel Naomi Campbell the star of the E-race

Naomi Campbell, the British supermodel, actress, producer and businesswoman, who graced the covers of nearly 600 magazines and has been featured in many of the most prestigious fashion campaigns, was in the Principality and became the star of the Monaco E-Race. She continues to be a formidable force in the world of fashion, and uses her incredible success to help others by her involvement in charity work.

HSH Prince Albert, Charlotte Casiraghi and her son and Naomi Campbell at the start of the E-race in Monaco @CelinaLafuentedeLavotha

Naomi Campbell organizes a charity gala on Sunday, May 21 at the airport of Cannes-Mandelieu to finance her foundation Fashion for Relief, to help children. The supermodel seems to enjoy the Principality as she will return on June 1, 2017 to receive an International Fashion Award during the 5th edition of the Monte-Carlo Fashion Week, during the MCFW Fashion Awards Ceremony and Gala Dinner at the legendary Oceanographic Museum of Monaco.

About the FIA Formula E Championship

The FIA Formula E Championship is the world’s first fully-electric single-seater racing series, competing on the streets against the backdrop of some of the most iconic cities – including Hong Kong, Marrakesh, Buenos Aires, Monaco, Paris, New York and Montreal. The championship represents a vision for the future of the motor industry, serving as a platform to showcase the latest innovations in electric vehicle technology and alternative energy solutions. Future seasons will see the regulations open up further allowing manufacturers to focus on the development of motor and battery components, which in turn will filter down to everyday contemporary electric road vehicles.  The 2016/17 FIA Formula E Championship sees 10 teams and 20 drivers go wheel-to-wheel in nine cities spanning five continents in the fight to be crowned Formula E champion. The inaugural season of Formula E sparked into life in September 2014 around the grounds of the Olympic Park in Beijing. The third season of the electric street racing series started on October 9 in Hong Kong, with the season finale double-header taking place in Montreal on July 29 & 30.

Around 15 trophies were given to economic actors and private people in the Principality to recognize the good behavior in matters of energy use, in the presence of H.E. Serge Telle, Minister of State of Monaco, H.E. Bernard Fautrier, and other dignitaries.  The forward thinking company took the opportunity of the FIA Formula E Championship and organized an Awards Ceremony in a Terrace overlooking the circuit, just before the start of the e-race, recognizing companies, building syndics and private users for their engagement in the proper use of energy. “We have to succeed all together in the collective challenge of the energetic transition”, emphasized Thomas Battaglione, General Director of Smeg as a prelude to the ceremony.

Among the laureats were the Prince’s Palace, the Monte-Carlo Bay and Wolzoc cabinet for their participating in the Smart+ project. But also the Louis II Stadium and the Oceanographic Museum of Monaco, recognized for having bought green electricity. Also, the Automobile Club for its engagement in terms of proper mobility. The next E-Awards Ceremony will be in 2019 when the E-Championship returns to the streets of the Principality.

“I think the cost of energy will come down when we make this transition to renewable energy.” Al Gore