In July we were in Mykonos, the happening island of the winds, and had the privilege to attend Patricia Field’s Art Fashion extravaganza, as part of the summer Wedanceday Experience series at the posh paradise JackieO’ Beach, owned by Carsten Stehr and Michalis Sigounas, organized with the help of charming and enthusiastic Katerina Gkouma. Darren Star, producer of Sex and the City, American actress Debi Mazar, who is in the cast of Star’s latest TV series “Younger”, and TV and film friends from New York and L.A., came to the island to honor Field. 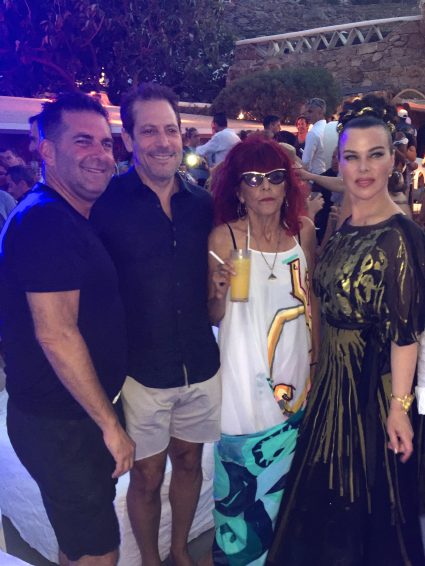 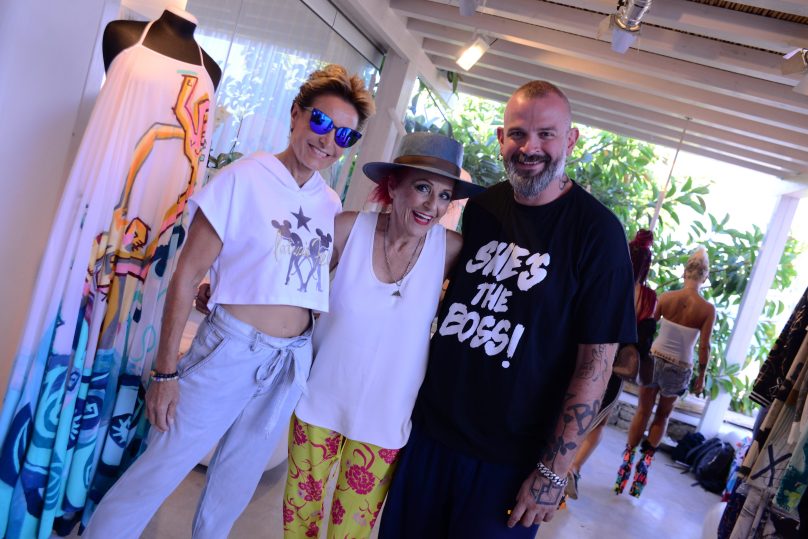 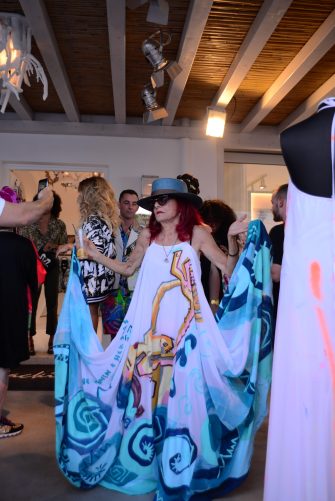 Patricia Field, the celebrated revolutionary designer created the Art Fashion project and has been acclaimed by fashion media from Vogue and Elle to Harper’s Bazaar and InStyle, and has been presented in the biggest fashion and art events around the world, from NY FW to Berlin FW and Art Basel Miami, being featured in the most influential retail top brands. Pat and her collaborating artists created clothes that have been favored by celebrities such as Beyonce, Alicia Keys and Katy Perry to Lady Gaga, Nicky Minaj and many others, who have worn them on stage to create iconic looks. (Photo insert: Patricia Field @Vivi Kaparou)

The native New Yorker, and one of fashion’s greatest visionaries, has been enjoying a multi-faceted career spanning over 5 decades and still going strong. Field changed the way women dress through the HBO series “Sex and the City” (SATC), the most fashionable show in TV’s history, partnering with Rebecca Weinberg with whom she was romantically involved for many years. Patricia Field and Sarah Jessica Parker capture the iconic style of the 21st century New York woman, eclectic like the Big Apple scene. First episode aired in 2004 with Carrie Bradshaw wearing a tulle tutu skirt and tank top that became the young downtown look.

Field received an Emmy Award and five nominations for Best Costume Design. She also received an Academy Award for “The Devil Wears Prada|, as well as continued recognition for her work on television series such as Ugly Betty, Hope & Faith, and most recently Darren Star’s hit TV series “Younger” launched in March 2015, with beautiful Deborah Mazar in the cast.

Pat was born to a Greek mother an Armenian father, emigrating from Plomari, Lesbos, so it was to no surprise she decided to bring her Art Fashion show to Mykonos, in a special collaboration with long time friend Greek designer Apostolos Mitropoulos, the creative mind behind the project, and all the artists who worked on the collection.

The dynamic duo created a capsule collection featuring haute couture, unique garments and ready-to-wear pieces that were available at the pop up store they started together inside Apostolos’ boutique in Mykonos.(Photo insert: Apostolos Mitropoulos, Patricia Field & Deborah Mazar @Vivi Kaparou) 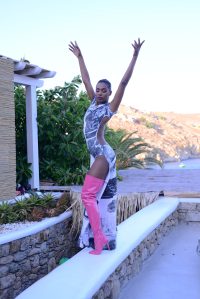 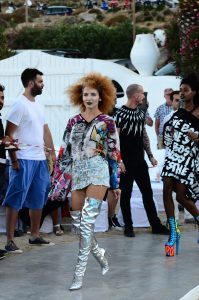 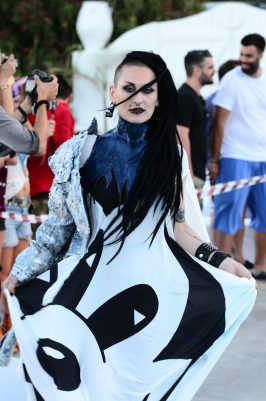 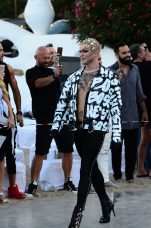 Apostolos created blank garments in black and white, with distinctive silhouettes that served as canvas for some of New York’s most prominent and hip artists like Scooter LaForge THESEPINKLIPS, Jody Morlock, Ben copperwheat, Kyle Brincefield and Lara Padilla. All the artists customized the clothes according to their aesthetics reinterpreting the idea of Greek culture and utterly creating one of a kind garments that can only be described as work of walking and wearable art.

Pat and Apostolos staged the most amazing catwalk and party at the uber most famous club JackieO’, where the newly designed clothes were shown for the first time in Greece as part of the fashion/music project. Mac cosmetics were in charge of the original make up and Vangelis Hatzin did the fabulous hair styling for the ravishing models, and photos by Vivo Photography. 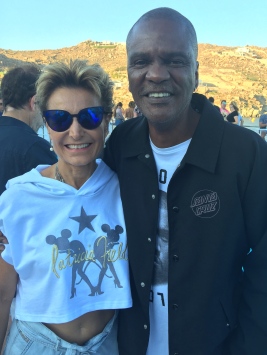 The music for the Art Fashion show was assured by Kenny Carpenter, the famous resident DJ at Studio54, who has gone through from every part of nightlife.

He’s a true entertainer who knows how to have good time and can really rock a party with his cool tunes.

He produced and forged creative relationships with artist such as Madonna, Jennifer Holiday, Michael Jackson, Robin S and many more. Kenny continues to travel extensively and perform in some of the most fashionable venues worldwide.

The Art Fashion show was in full swing with Kenny at the platines, with the models trotting the runway with their colourful clothes like a living painting, a work of art indeed!

“I love to do fashion. I always put fashion in all of my storytelling because that’s what I am, but I’m not selling clothes, I’m telling a story.” Patricia Field