Culmination of Monaco Sportsboat Winter Series with a woman in the front – Bravo Valeria Kovalenko!

The 5th Monaco Sportsboat Winter Series that set sail on Friday, December 8, culminated this past Sunday, December 10, 2017, during a very trying weekend with winds rotating from East, West and South, going from 3 to 30 knots! Some 50 contestants and 150 sailors from nine nationalities on board Melges 20 & J/70, were out again in force for Act III of the Monaco Sportsboat Winter Series, organized once a month by the Yacht Club de Monaco from October to March, in collaboration with SLAM, an initiative of Valentin Zavadnikov.

A woman in the front

Valeria Kovalenko (Art Tube) won the event in the J/70s with a metronome consistency. The Russian team gave a faultless performance since the start of the season, and it was impossible to sidetrack this lady from Eastern Europe whose strategy seems to improve with every race. YCM’s Stefano Roberti (Piccinina) arrived an honourable 2nd, with the Swiss W.A.T.C.H. team completing the international podium. 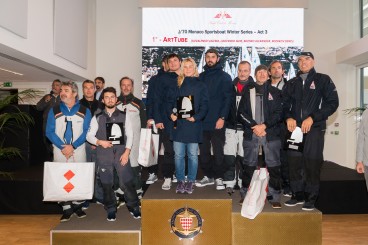 Talented sailors coming from all coins of the world

The Brazilians on Manda Chuva, who were 2nd overall last season, came a long way for this competition. Notably also the participation of French sailor Jean-Baptiste Bernaz, Laser star at three Olympics, and Elliot Willis, member of the British Sailing Team and a brilliant 470 sailor: “I was here for the previous Act. Every time, it’s a real pleasure both in terms of the conditions and organisation. It’s great to meet new teams and be able to race here in the middle of winter.”

Every year, the YCM’s regatta attracts newcomers, such us the two Omani teams who arrived in October for the whole season, confirming Monaco as a winter training base for some of the major one-design teams.

Equally important is the role this Series plays in the YCM’s training strategy, as this weekend saw two teams from the Club’s Sports Section competing. After a successful first season in the Laser Standard (Olympic class), Jérémy Moutout was again on the start of this Winter Series on Leva finishing 22nd. Rémi Piazza, a young Monegasque, was also at the helm of Levante, coming in 16th in the overall ranking and 2nd in the Corinthian (amateur) category.

Just a few months since making his debut in the Melges 20s, Ludovico Fassitelli (Junda – Banca del Sempione) continues to gain momentum. Having won the first Act, the YCM member was again on the podium, this time in 2nd place behind the Russians on Rocknrolla. Alexander Mikhaylik leading the crew on Alex Team on the third step of the podium. 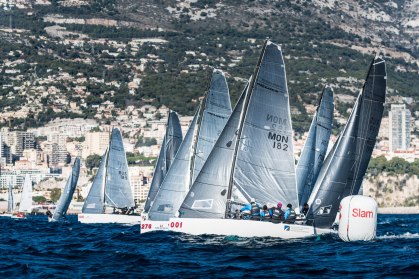 A versatile talented sailor, Ludovico Fassitelli had already shown his true colours last season in the J/70s, finishing 3rd.  It seems nothing can stop this talented helmsman. “It’s great to finish in this place. We sail together regularly which means we keep up the pace and work on our reflexes and coordination.” It is surely a tactic that pays off.

As the final Act of 2017 for the Monaco Sportsboat Winter Series culminates, teams are already preparing for the next event from January 19-21, 2018, before the “Big One”: the Primo Cup – Trophée Credit Suisse from February 9-11, 2018.

“If one does not know to which port one is sailing, no wind is favorable.” Lucius Annaeus Seneca