Yesterday, Thursday, December 14, 2017, the lobby of the legendary Hotel de Paris became an enchanted forest of colorful and shiny Christmas Trees, generously donated by prestigious houses and kind individuals, that were auctioned to raise funds for the Monegasque association Action Innocence, presided by Louisette Levy Soussan Azzoaglio, waving a magic wand over Monte-Carlo.

Year after year since the start of this charity sale back in 2004, Prince Albert joined his long time friend Louisette and her team, reaffirming his support for their continuous unrelenting work. 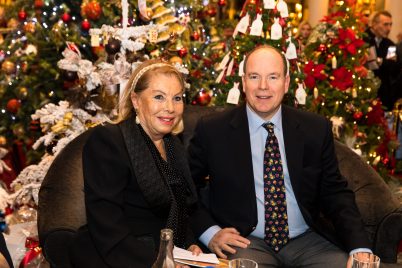 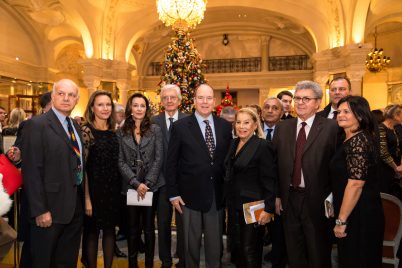 While contemplating the splendidly adorned Christmas Trees, generous bidders and their children were delighted with the performance by the charming chorus of young girls from the International School of Monaco (ISM), singing Christmas Carols under the direction of Colette Max Nielsen, adding to the holiday spirit. Christmas is not about opening presents but opening our hearts!

The Chrous of the International School of Monaco @Philippe Fitte

Professional auctioneer Lionel Gosset of Christie’s France conducted the live auction, raising € 73,250 from the sale of 35 beautifully decorated trees. Action Innocence thanks the generous bidders who will enable the association to continue their mission to protect the dignity and integrity of children surfing the Internet. The highest bid of €11,500 went to the porcelain Christmas tree painted with 24 carats gold, a unique piece specially created for the charity auction by the Manufacture de Monaco Boutique. 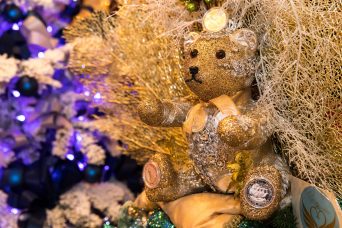 Teddy Bear at the base of the SHE by Shanu Christmas Tree (No.9) @Philippe Fitte 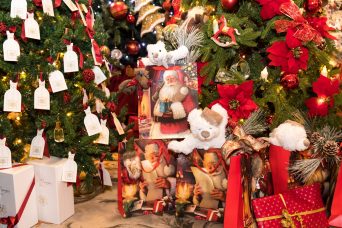 Tis the season of giving

As it has been customary for the last eight years, Action Innocence offered the proceeds from Rudolph, the Green Reeinder (Tree No.32) donated by Gruppo Giardini, to the Monegasque association Jeune J’Ecoute. This generous donation will help them to continue this organization dedicated to support children, adolescents and their families.

To this date Action Innocence has supported these associations:

Preserving the integrity of children in the Internet

Action Innocence is a non-for-profit association founded in 1999 in Switzerland, and created in Monaco in 2002 by Mrs Louisette Levy Soussan Azzoaglio (In the photo insert HSH Prince Albert with Louisette and members of Action Innocence.)

Its mission is to create awareness among children and their parents about the dangers of the Internet, including preventing them from becoming victims of sexual abuse, remind children that anybody can hid behind the internet mask. The Internet is without a doubt the favorite means of communication for people of all ages.

This association works to protect the dignity of children by warning them of abuses such as cyber-bullying, sexting (sending of sexually explicit photos, images and text messages), gaming and the danger of impersonators, sexual predators and pornography. Their goal is to provide children with Internet safety tips and civil practices and help develop their critical thinking and decision-making skills, and at the same create awareness among parents and educators so they can become partners.

“Where there is charity and wisdom, there is neither fear nor ignorance”. Francis of Assisi