150 boats at the start of the show

This past weekend was the next to last Act of the Monaco Sportsboat Winter Series monthly regattas rolling from October through March, organized by the Yacht Club of Monaco, with nearly 150 boats representing seven countries at the start. 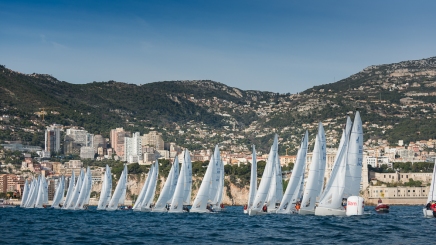 Valeria Kovalenko owner/driver of Russian J/70 Art Tube, was again the uncontestable trailblazer, with three wins out of four races that counted, proving that the Russian team was consistent and in full control of their boat. They worked their way steadily back up the fleet, nibbling away at the lost meters until the finish. Their strong point: the downwind legs, tackled with skill and every wave perfectly negotiated.    The new master of the Monaco race area has triumphed in all 2017/2018 meetings, racing to her second consecutive victory in this Winter Series.

The name ArtTube came from a project that Valeria Kovalenko manages that provides information on art exhibitions and modern art, from private galleries to state museums all around the 15 former Soviet Republics. Their website, in Russian and English, that lists art events worldwide, became their team’s communications partner.

Despite their best efforts, the Germans on Paint it Black led by Carsten Kemmling were 2nd, ahead of the YCM’s Stefano Roberti. But the skipper on Piccinina pulled out all the stops to keep his ambitions alive, coming in the top six in every race, remaining 2nd in the provisional overall ranking after four Acts, behind Valeria Kovalenko.

As part of the YCM’s coaching policy, two teams from the Club’s Sports Section are now competing in the Monaco Sportsboat Winter Series, with youngsters like Rémi Piazza. A newcomer to the J/70 class he embodies the new generation of racers keen to shine in the keelboat categories. He finished 17th this weekend and 3rd in the owner category. Also competing was Leonardo Bonelli, a YCM Optimist sailor who at only 12 years-old was racing on a J/70 for the first time.

Provisional ranking for the season after four Acts – J/70

“The only idols I have in sailing are my teammates.” Valeria Kovalenko