Hundreds of sailors, from 12 countries descended in the sunny Principality for the highly anticipated 34th edition of the Primo Cup – Credit Suisse Trophy, organized by the Yacht Club of Monaco from February 9-11, 2018. Some 300 navigators got on board 80 boats, in five classes competed in eight races in perfect sailing conditions. The 2008 Laser Olympic champion Paul Goodison enthusiastically said: “It’s great to be able to come here in the middle of winter and enjoy back-to-back races in ideal conditions against a high-level field.”

Another special feature of the Primo Cup is that it rewards teamwork as  crewmembers in the first three boats in each class receive clothing from SLAM’s Advanced Technology Sportswear. 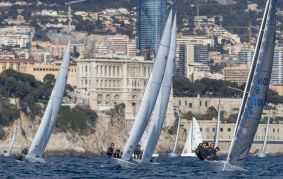 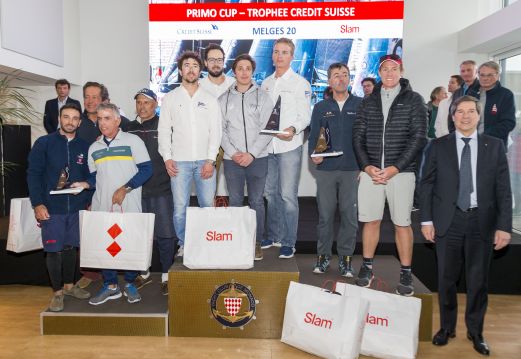 This class, with a full house of 41 registered, enjoys the biggest concentration of J/70s in the Mediterranean with 20 boats, with competitors heightening its efforts to overtake the season’s leader, in the absence of Valeria Kovalenko and her team on Art Tube. Three boats managed to widen the gap over the eight races. The near-flawless Swiss team on CDE.CH helmed by Guillaume Girod was rewarded with 1st place just ahead of the YCM’s Vincenzo Onorato (Mascalzone Latino) who pulled off a superb comeback on the last day of racing. The Brazilians on Mandachuva, winners of the previous edition, completed the podium. It is important to highlight a fine win in the Corinthian category for Nicolas Bouchet on Ponante, coached by the YCM’s Sports Section, finishing 4th in the final overall ranking.

The stakes were high in the Melges 20 fleet with 11 registered, competing here in their final Act of the Monaco Sportsboat Winter Series, monthly regattas held from October to March and launched in 2013. The Primo Cup was doubled-edged for those eager to accomplish their best for their last show this season. At the end of four Acts and 28 races, victory went to the Russians on Alex Team lead by Alexander Mikhaylik, who also won this Primo Cup. They piped the stage’s local, Ludovico Fassitelli (Junda), to the post who finished 2nd for the season and 4th this weekend. Pavel Grachev on Medyza came 3rd while Maxim Titarenko (Leviathan) plucked 3rd for the 2017/2018 season.

The YCM’s Timofey Sukhotin on Beda once again recorded a win on the Primo Cup. The helmsman on Beda has a string of successes after winning for the second year in a row the annual championship. But the battle was fierce at the back between class president Charles de Bourbon des Deux-Siciles who finished 2nd on equal points with Marco Favale (Smeralda 6).

For the Stars, the Primo Cup is the third stage of their European winter circuit. It is a must on the calendar for teams competing in this former Olympic class attracting great champions like Christian Nehammer from the 2008 Beijing Olympic Games. From the start, the Austrian could not touch former World Champion Roberto Benamati, who grabbed victory with both hands. “The organisation both on land and on the water was fantastic and I would love to see this regatta become a classic for our class,” concluded the winner. Steffen Rutz on Squalo Bianco VII was 3rd, with the YCM’s Filippo Orlando in 5th.

The Longtze Premier, a lively, very reactive little boat with its colorful sails, made a come back to the Monaco race area. Steffen Schneider on Outsider won four of the seven races to capture the event, followed by another Swiss Jarmo Wieland (Shensu) in 2nd with the German Thomas Begher completing the podium.

The next regatta in Monaco is the final Act of the Monaco Sportsboat Winter Series, March 9-11, 2018.

“Thought is the wind, knowledge the sail, and mankind the vessel.” Augustus Hare