The rebirth of golf in the Principality

The 2ndsuccessful edition of the Monaco US Celebrity Golf Cup presented by H.S.H. Prince Albert II, saw the US and Europe teams compete at the legendary Monte-Carlo Golf Club from June 15-18, 2018, with another victory by Team US whose honorary captain is no other than Prince Albert II. 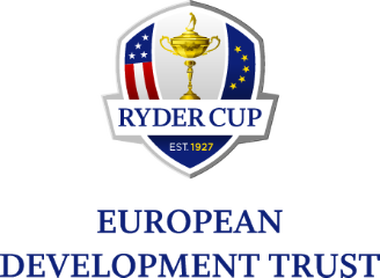 The centenary legendary Monte Carlo Golf Club, located in Mont Agel in La Turbie, was designed by Willie Park, Jr. and opened in 1911, offering an 18-hole golf course in an idyllic setting between the sea and the mountains! The golf course has a rolling terrain that requires extreme precision. (Photo below: View of Monte-Carlo Golf Course, Mont Agel, La Turbie)

The Monaco US Celebrity Golf Cup was created to bring back to life the once famous Monte Carlo Open officiated by Prince Rainier III of Monaco and Princess Grace.  The Monte-Carlo Open was held at the Monte-Carlo Golf Club from 1984-1992, gaining international popularity with the participation of many celebrities from the U.S. and Europe.

The goal of the Monaco U.S. Celebrity Golf Cup Association is to organize and protect the brand of the world’s most prestigious amateur celebrity Ryder Cup event held every two years in the Principality.

An idea whose time has come

It was always interesting to know how a budding idea discussed among friends became a reality. Susan Feaster, Chairperson of the Monaco US Celebrity Golf Cup, shared with Monaco Reporter that the proposition to revitalize golf in Monaco was proposed to her by former French Ambassador H.E. Hugues Moret, during a dinner at Philippe Laik legendary Chateau Tardieu, while visiting Monaco working for Ryder Cup France 2018 Partners Club. Moret believed that an event could be organized in Monaco connected to the Ryder Cup France. Susan reponded that Ryder Cup France involved US and of course France but not Monaco, to what Moret enthusiastically replied: “But the Monte-Carlo Golf Club is on a French mountain!” So Susan agreed to consider his suggestion and the rest is history.

Susan explains: “The idea was to have a Celebrity event in Monaco between well known personalities who happened to be excellent and passionate golfers.  We would honor Ryder Cup France 2018 and follow the real Ryder Cup “experience” as close as possible for amateur golfers.  Only professional golfers can play in a Ryder Cup Match, so this event gave amateur celebrity golfers the experience to play golf and represent their countries on Team USA or Team Europe.”

Of course you require a team of committed people on both sides of the ocean, plus the contribution from generous sponsors, to advance this great idea and make it into a reality, but above all you need a passionate and relentless chef d’orchestre like Susan to bring everybody together and go for it! Susan is grateful for the ongoing help of everybody involved, including her two children Nicole and Nicolas, because she believes that as a leader you are as strong as the team around you!

The Monaco US Celebrity Golf Cup run over four days with a plethora of events:

Thursday, June 14 – Welcome Reception at Metropole Hotel followed by Dinner at Pacific Restaurant. on a Fraser Super Yacht in the port of Monte-Carlo hosted by Roberto Giori & Fraser Yachts

US and European Celebrities Pro Am, followed by a “Fish”Ball Golf Challenge at the Yacht Club of Monaco (YCM) where USA Captain Prince Albert and European Captain Pascal Grizot hit fish balls into the sea from a yacht (Fish balls are biodegradable, non-toxic EcoBioBalls, filled with fish food that begin to dissolve after 24 hours, fish begin eating the food inside after 36 hours before the balls fully dissipate after 28 days.). The day culminate with the America’s Got Talent Party at the YCM, hosted by ICON Golf, Fort Worth, Texas

Saturday, June 16 – Monaco US Celebrity Golf Cup Match – Team USA vs Team Europe Celebrities at the Monte-Carlo Golf Club, followed by a Junior Monaco US Golf Cup Match sponsored by Ryder Cup Trust. The Junior Match was kicked off with the World’s Longest Drive Championship Winners and  ended up with the Monte-Carlo Casino Night Cocktail in the Terrace of the Cafe de Paris, hosted by Eric Brundage and Monaco Life.

Sunday, June 17 – Awards Gala at the Yacht Club of Monaco

The U.S. Monaco Celebrity Cup trophy was presented by H.S.H. Prince Albert II to the winning U.S. team, of which himself is the 2018 Honorary co-captain, during the Awards Gala Dinner at the Yacht Club of Monaco on Sunday, June 17, 2018. On this occasion the Chairman of Ryder Cup France 2018 Pascal Grizot, who is also the event’s European Team captain, received the Life Time Achievement Award from the hands of Prince Albert. 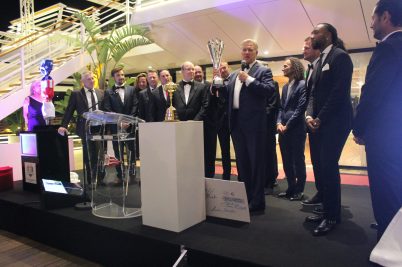 Over the weekend, Grizot commented, “A golf game is the best school of life. One day you’re on top of the summit and the next, at the bottom.” Grizot was also named Personality of the Year on March 16 for his leading role in France’s candidacy for the 2018 Ryder Cup.“I am very proud,” said the Vice-President of the French Golf Federation (FGF). “This winning bid was a great moment and I think having the chance and honour to host the Ryder Cup in our country will help us develop golf. An adventure that would never have been possible without the support of clubs and licensees.”

The Master of Ceremonies of the Awards Gala Dinner was no other than world famous saxophonist Kenny G, who delighted the guests with his music and was one of the celebrity players in this top class golf event.(Photo: Susan Feaster presenting Kenny G during Gala Dinner@Nancy Heslin)

Kenny G’s testimonial sums it all up: “The Monaco U.S. Celebrity Golf Cup is an experience like no other. For us amateurs who watch the Ryder Cup and dream about what it would be like to represent your country in an event like that, the Monaco U.S. Celebrity Golf Cup is the event that let’s us experience this! And the atmosphere of camaraderie sets the stage for making invaluable relationships with our European counterparts in the entertainment, business and Sports World. “ 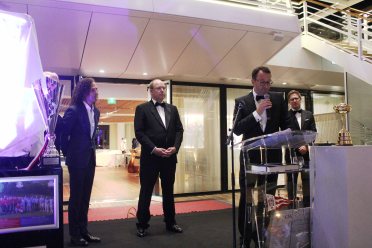 As a result of the success of the sponsorships, H.S.H. Prince Albert II presented a check on behalf of the Monaco U.S. Celebrity Golf Cup in the amount of €50,000. In addition, a “Green Golf” gift was presented to the Prince Albert II Foundation for environmentally enhanced golf course construction and sustainability. (Photo: Prince Albert with Kenny G and Pascal Grizot, Chairman Ryder Cup France 2018 presentation @Nancy Heslin)

Susan further explained: “Like the Ryder Cup, the golfers (Celebrities) are not paid to play in this event and win no prize money.  It is the Highest of Honors in Golf.  Higher than an Olympic honor, the golfers (Celebrities) must be invited to play based on their skill of golf and their personal integrity as a sportsman.  The Ryder Cup is the only golf event that is a Team event, not an individual sport.”

Bravo to all celebrities & amateur players for their participation! 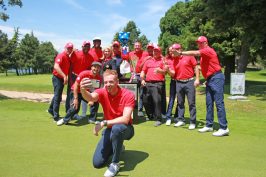 The European and US teams, Monaco US Celebrity Golf Cup @Nancy Heslin

“Success in the game of golf depends less on strength of body than strength of mind and character.” Arnold Palmer