Like a veritable theater stage the Port Hercules in the Principality transforms itself periodically. Even when the last remnants of the F1 Grand Prix were still in place waiting to be disassembled, over 1100 tons of sand transported on 60 trucks were carefully spread over the quay on the southern dock, at the foot of the Prince’s Palace, to create a 2025m2 ephemeral arena designed by Luc Musette, plus 1100m2 paddock for 195 horses, an spectator’s tribune, stunning VIP corporate hospitality loges, chic boutiques and the double deck riders’ club, for the traditional and highly anticipated 13thedition of the International Jumping of Monte-Carlo, from June 28-30, 2018, one of the most prestigious stops of the Longines Global Champions Tour (LGCT). 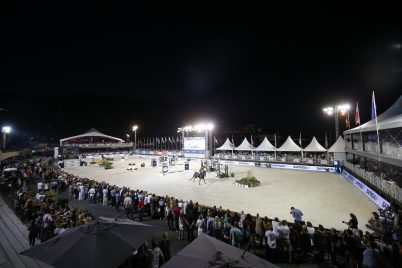 Flawlessly organized and presided by Diane Fissore, and Jan Tops, professional Gold medal rider and leader in the horse-trading world, the competition is one of the highlights of the LGCT, and it is the third most important sporting event  in the Principality together with the F1 Grand Prix and the Tennis Masters.

Each lap of the LGCT is a Grand Prix of Euro 300,000, with approximately Euro 100,000 for the winner, allotting the emerging points to the general classification: at the end of the circuit, the eighteen best riders will share a purse of Euro 1,000,000. In Monaco the total purse amounts to Euro 393,500 with €285,000 allocated to the Grand Prix prize. A wonderful three-day program including amateur competitions during the day followed by top-level fixtures after sunset.

A cast of star riders & horses on the Monaco’s arena

Only the 30 world best are invited to this illustrious competition with a truly exception casting of riders in a breathtaking venue. The top three in the LGCT ranking came to compete in the Principality:  Two-time LGCT Champion Edwina Tops-Alexander (AUS) leads the field on 172 points, just a LGCT Grand Prix win away from Ben Maher (GBR) in second who has 143 points overall. Breathing down his neck is another two time LGCT Champion, Scott Brash (GBR), who sits a further 12 points away.

Former winners were back in action this weekend including 2017 winner Alberto Zorzi (ITA), 2016 winner Emanuele Guadiano (ITA) and 2014 winner Bassem Hassan Mohammed (QAT). Amongst the stars, big names, rising talent and legends of the sport battled for the coveted LGCT Grand Prix du Prince de Monaco presented by Sapinda win, one of the most prestigious accolades in show jumping.

On Friday, June 29, 2018 in the evening, the Longines Global Champions Tour of Monaco once again played host to the 8th edition of the Longines Pro Am Cup on Friday evening, which sees an amateur and professional rider pair up to compete for the coveted title with a focus on speed and agility.

Launched by Patron Charlotte Casiraghi in 2010, it emphasizes the family spirit of the sport, with its pace and relay format the audience loves. Set over two rounds, 13 teams took part – including reigning champions Team Sapinda, as well as Team House of Sillage, Team Monte-Carlo Polo Team and Team Virtus, all battling to jump clear and with the fastest combined time.

As the competition went on the eight qualifying teams continued to fight for a podium finish as the crowd clapped and cheered for the riders. Victory went to Mona Ferry and Christian Rhomberg of Team Equestrian Federation of the Principality of Monaco, second to Florence Schwizer-Seydoux and Roger-Yves Bost of Team Equitheme, and third to Team Monaco Aces featuring Jeanne Sadran and Julian Epaillard. 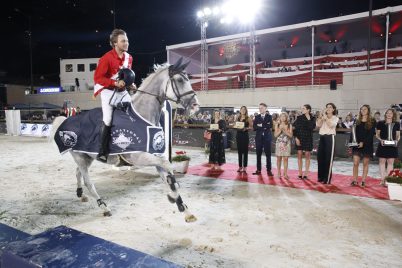 A smiling Christian had said after his blistering round: “It’s fun! I’m lucky I have a fast mare that makes even a slow rider like me fast! My teammate did a really good job. I just tried to make her go faster in the second round, but we have a few problems with our language – I don’t speak French!”

Under the patronage of HSH Prince Albert II of Monaco, the 9th leg of the Championship race is a long-standing and popular stop on the calendar, with illustrious names listed on the winners’ roster over the years. The Longines Global Champions Tour Grand Prix Prince of Monaco took place on Saturday, June 30 in the evening, the last day of the competition.

With 35 riders qualified, Ireland’s Shane Breen, who was the last rider to go, took the biggest win of his career and dashed Alberto Zorzi’s (ITA) hopes of a back-to-back Longines Global Champions Tour Grand Prix Prince of Monaco Presented by Sapinda win, after a spectacular performance aboard Ipswich van de Wolfsakker on Saturday, June 30, 2018. Breen’s win means he is the latest addition to the GC Playoffs, with a ticket to the elite line-up in the Longines Global Champions Tour Super Grand Prix that will take place in Prague this December.

This would be the biggest win of Breen’s career, and the Irishman punched the air in triumph ecstatic at his win, and place in the GC Playoffs. Breen was quoted saying: “This is my biggest career win and my first time winning at the LGCT Grand Prix. It is a great honor to be here and to be part of the GCL – it’s a great atmosphere. Ipswich is quite a green horse at this level and has had a few fences down this season.  We’ve been knocking on the door but today he jumped fantastically.

He was surprisingly relaxed as he can be quite sharp and has a lot of nervous energy but that was in our favor this evening in Monaco. He produced two super rounds and with Dennis leaving the door slightly open and Aberto with a fantastic quick round, the guys on the ground were saying that if I could do the same numbers my horse is naturally very quick.When I turned for number one, I didn’t have a flier at it, then I went nine strides to the second jump and I had to remind myself not to panick.I got the double jumped and moved on a bit then and fortunately when addressing the last I saw a good stride and took it! I’m now in the LGCT [Super Grand Prix] and I’m elated – it’s an elite group of riders, so I hope I can take Ipswich there again and do well.” 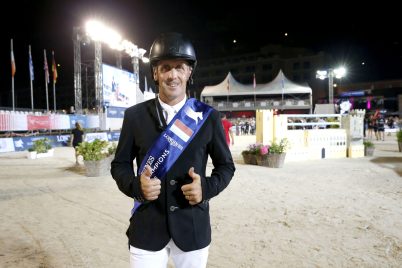 Competing in front of a royal audience

H.S.H. Prince Albert II of Monaco, H.R.H. Princess Caroline of Hanover and Charlotte Casiraghi watched from the Royal Hospitality as the first riders navigated the exceedingly technical course in the compact sand arena.

Members of Royal Families from around the world, including H.E. Sheikh Joaan bin Hamad Al Thani, H.E. Sheikha Al Mayassa bint Hamad bin Khalifa Al Thani and Prince Talal of Jordan taking their seats for a feast of top show jumping. Bill and Melinda Gates with ringside seats were clearly absorbed in the highest level of show jumping in which their daughter Jennifer competes. The family cheered on Jennifer’s trainer Harrie Smolders (NED) as they watched the Grand Prix from the VIP area.

Melinda and Bill Gates with their daughter Jennifer @Stefano Grasso/LGCT 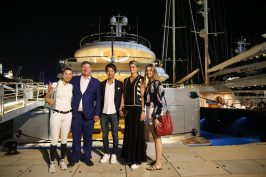 Next stop is the City of Lights

The Tour moves on to Paris, July 5-8, for the 10th leg of the 2018 Championship race as the action intensifies.

“To ride a horse is to fly without wings.”Anonymous