Spectacular Egyptian exhibition The Gold of the Pharaohs inaugurated in Monaco

The monumental Egyptian exhibition The Gold of the Pharaohs, was inaugurated at the Grimaldi Forum (GF) in Monaco on July 6, 2018 in the evening, in the presence of H.S.H. Prince Albert II of Monaco, exposing 25 centuries of goldsmith trade in ancient Egypt, gathering 150 masterpieces from the Egyptian Museum presenting a series of prestigious ensembles discovered in the royal and princely tombs of the pharaohs of Egypt. The exhibition is open to the public from today July 7 until September 9, 2018, under the auspices of H.S.H. Prince Albert II of Monaco and the Egyptian government.

Egyptian government authorities present in Monaco gave a brief presentation to the Media earlier in the morning, before a private tour conducted by the exhibition’s curator the celebrated Christiane Ziegler, Honorary director of the Department of Egyptian Antiquities of the Louvre Museum, Director also for the publication of the archeological Mission of the same museum in Saqqara, Egypt, and President of the Archeology Center in Memphite. Ziegler was also the curator for the highly successful exhibition “Queens of Egypt,” hosted by the Grimaldi Forum in 2008.

Whatever the controversy about the Pharaohs, Egypt is an incredible protector of times gone by, where past has been unearthed for generations to come. Ancient Egypt is not only a land of mummies and pyramids, as the pharaoh’s tombs also preserved precious documents, including the oldest books on papyrus and parchment, and almost everything else. The Egyptian Government wishes to display the glory of their past for the present and the future. The masterpieces in this exceptional exhibition first hosted in the Principality of Monaco will go back to Egypt to be part of a permanent exhibition at the Museum in Cairo.

Khaled El-Enany, Egypt’s Minister of Antiquities from 2001, spoke about his plans to enhance Egypt’s heritage profile, and this exhibition in Monaco proves his commitment on that direction. El-Enany completed his doctorate in Egyptology in 2001 at Montpellier III University in France, writing about ancient Egyptian royal names. Also present was Osama Heikal, Head of Parliament’s Media, Culture and Antiquities Committee.

Sahar Talaat Mostafa, chairperson of the tourism and aviation committee of parliament in Egypt, said that the coming period will witness the development of the legal and legislative framework that will add more structure to the tourism sector, done in cooperation with the government and the private sector. Ihab Badawi, Ambassador of Egypt to France and permanent delegate to the UNESCO, supports cooperation between Egyptian and French and Monaco authorities, in the fields of protecting world cultural heritage and boosting cultural relations. Alumna Rania Al-Mashat, newly appointed Minister of Tourism, is the first woman to hold this position since the ministry was established more than five decades ago. This new title suits the young and successful Egyptian leader, who has always emphasized being driven by a sense of responsibility to serve her country.  “Every international and domestic post or recognition along my career path better equips me to competently serve my country,” said Al-Mashat. “That’s my lifelong goal.”

Highlights of the exhibition

The creative scenography developed by the Grimaldi Forum staff, successfully recreates the ambiance of the ancient Egyptian tombs, with wall-to-wall carpeting that really brings to mind the desert and gives the impression of walking on sand, the dim lights plus the use of intense blue color.

“This color was excessively used by the ancient Egyptians in everything they used to create. I was pretty much keen on making all the exhibition’s visitors feel that they are inside a real ancient Egyptian tomb,” said William Chatelain, who visited Egypt to get ideas for the scenography. 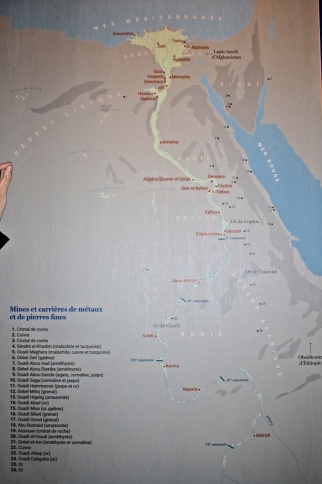 An Egyptian Eldorado – The myth of the Egyptian Eldorado goes very far back in time. The deserts surrounding the Nile valley were rich in minerals and precious stones highly prized for their vivid colors, the blue of lapis lazuli, the green of Sinai turquoise, the blood-red of cornelian, with gold deposits far richer than those of neighboring countries, others arrived by commercial routes.

Furthermore, with the establishment of the Egyptian empire, the pharaoh charged heavy tributes that engrossed the royal treasure and those of the grand temples, in particular the temple Amon in Karnak that received annually 250kg of gold to the temple under the reign of Thoutmosis III.

Pharaohs were the king or queen of Egypt. Most Pharaohs were male, but some famous pharaohs were female, such as Nefertiti and Cleopatra. A Pharaoh was the most important and powerful person in the kingdom. He or She was the head of the government and high priest of every temple. The people of Egypt considered the Paraoh to be half-human, half-god.

An area in Egypt has all the markings of a real Eldorado. It is located between the Nile and the Red Sea and has been named the “Golden Triangle” due to its somewhat triangular shape and development potential.

Goldsmith techniques – For the first time an exhibition is committed to presenting the jewels fabrication stages and techniques used by the Egyptian casters, goldsmiths and jewelers.  The craftsmen organized themselves in workshops in the pharaoh’s palace, residences of princes and governors, as well as in the temples, in a complex ranking system. In the tombs they depict the delivery of precious metals, the weighing, different stages of the creation process and presentation of the finished items. Their professional secrets were passed from father to son or master to apprentice. 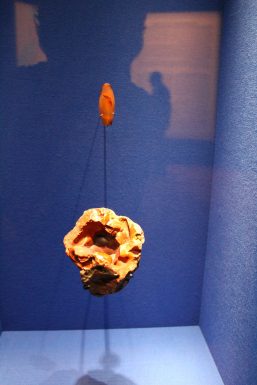 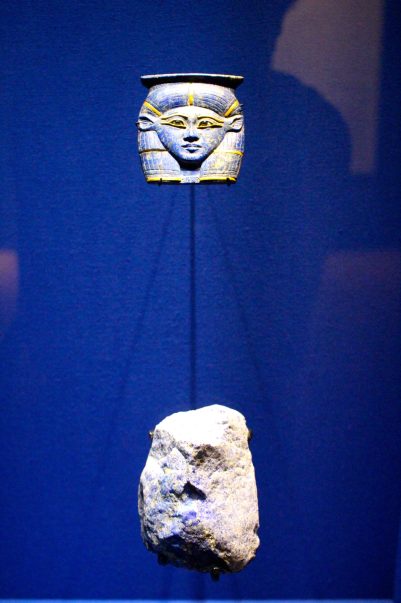 The jewelers’ art reached its zenith during the Middle Kingdom with a style of infinite elegance and perfection. The New Kingdom allowed for more elaborate decoration, while the Third Kingdom period was known by its return to the simplicity of earlier times.

The ransacking of the tombs – For the first time ever, this exhibition unveils and documents the pillage of the royal tombs to get hold of the gold of the dead, since ancient times probably dating back when the practice of burying the dead began, that explains why very few treasures are still available.  A 6min long animated film specially produced for this exhibition is based on fact: the grave-robbing case during the reign of Ramses IX and the transfer of royal mummies to more securely hidden tombs. (Photo: Papyrus journal describin the robberies and ttrials of the accused @CelinaLafuentedeLavotha)

The jewelry that embellished the bodies of the living also was offered to the gods in lavish quantities and buried with them in their tombs. These luxury items were evident coder markers of identity revealing the user’s social role and tell the story of the upper class. For the ancient Egyptians metals and precious stones were divine emanations with magical powers, specially gold known as “the flesh of the gods”, reason why it was used in abundance for burial masks and royal sarcophagi that raised the owner to divine status, preserved his body and enabled his rebirth. The use of gold fingerstalls or sandals on mummies was believed to restore the deceased’s use of his hands or ability to move about. To no surprise organized robberies were common as people wanted to get hold of those luxury items accumulated in the great pyramid and the tombs in the sacred site of the Valley of the Kings.

A chronological itinerary in images

Ancient Kingdom(circa 2700-2200) – The ensemble belongs to Kehops mother Hetepheres, discovered by Americans in 1926 in Giza, including sumptuous jewelry. From this same period is an emblematic statue of King Mykerinos, surrounded by statues of high society members wearing their jewels, plus other statues that illustrate daily life. At that time the dead were surrounded by servants who would assist them in the other life like they had done during their life on Earth. 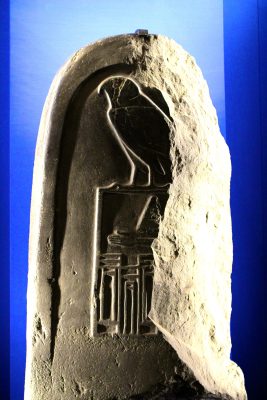 Middle Kingdom (circa 2033-1710 BC) – At the end of the 6thdynasty Egypt entered the First Intermediate period, a phase not known as conductive to creative activity, characterized by social unrest and foreign incursions. Towards 2030 BC it was reunified by Mentuhotep and there followed the Middle Kingdom considered in art and literature as Egypt’s Classical Age.  There is a beautiful statue of King Sesotris 1sst that marks the entrance to this period. Several bracelets were recovered from their tombs. The jewelry from this period correspond to our contemporary taste characterized by delicacy, purity of lines and sobriety. 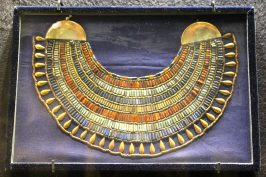 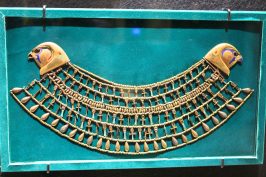 New Kingdom (circa 1550-1069) – In the New Kingdom Egypt reaches its zenith, with a politic of conquering towards the south, the Nubian desert of Sudan and the Middle East.  It is a time of extraordinary wealth as the victorious sovereigns send the tributes to the pharaohs, such as horses but most of all precious metals. 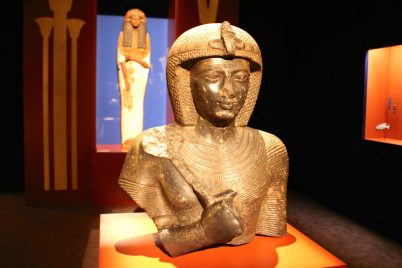 Third Intermediate Period (circa 1075-664) – The treasures of the pharaohs of the third intermediate period were discovered in their tombs located in the delta in Tanis. There are relatively modest, not comparable to the Valley of the Kings.  The more prestigious tomb was that of King of Psousennes, and exhibition of the funeral mask of King Psousennes 1er, that is no other than the second Egyptian royal mask after the one of Toutankhamon. 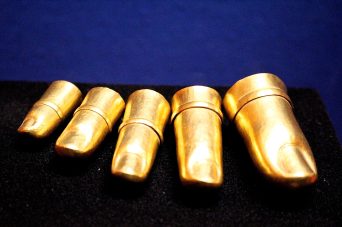 “When we look back at the Mayans or ancient Egypt, we look at their art.” Robert Wilson