Inform to prevent and eradicate

The association Fight Aids Monaco(FAM), presided by Princess Stephanie of Monaco, successfully accomplished their summer program, with events that help increase awareness about HIV, as well as raising funds to pursue their unremitting work in their battle to eradicate AIDS, and support people living with HIV in their daily struggle. Princess Stephanie is not only the President and Founder of Fight Aids Monaco since 2004 but also UNAIDS Good Will Ambassador since 2006

Princess Stephanie of Monaco looked joyful and in great spirits on arrival at the Sporting Monte-Carlo on Saturday July 7, 2018, accompanied by her children, Camille, Pauline, Lois and his fiancée, all in their theme-required gypsy attire, for the annual Fight Aids Monaco fundraising Gala. 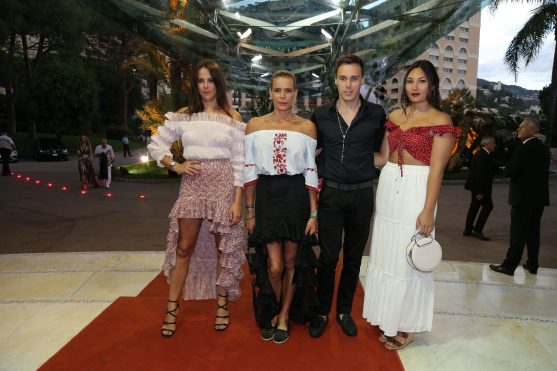 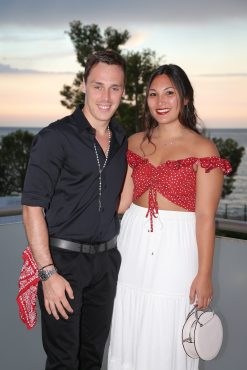 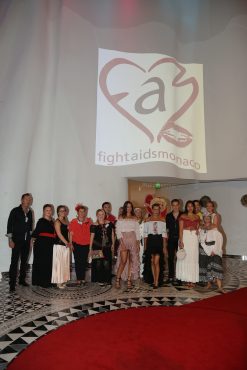 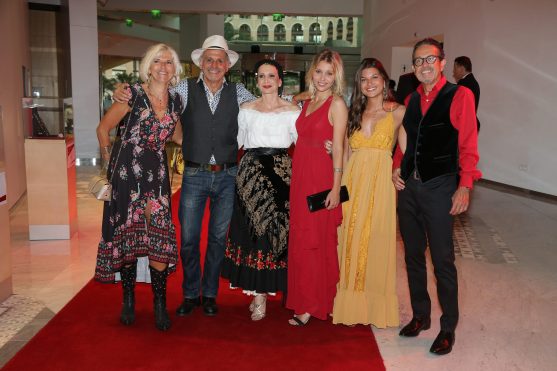 The show this year was assured by The Original Gypsies, four of the historic members of the Gypsy Kings who reunited after more than twenty years, and delighted the privileged guests at the rhythm of their guitars performing their hits Bamboleo, Volare, Djobi Djoba, A Mi Manera and more. 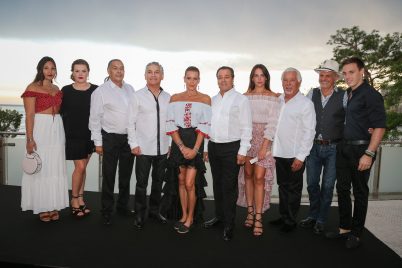 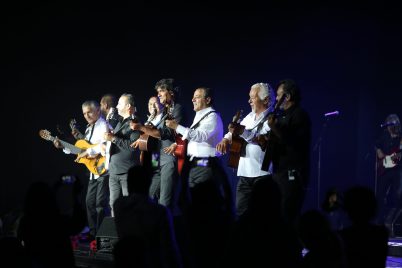 The event was perfectly animated by well-known radio and TV presenter Marc Toesca who also conducted the fundraising raffle. The association’s mascot Manel Dalgo, adorable female impersonator dancer delighted the public with his performance and magnificent costumes. Manel, who has a big heart, has been a loyal and highly dedicated volunteer for the association for many years. 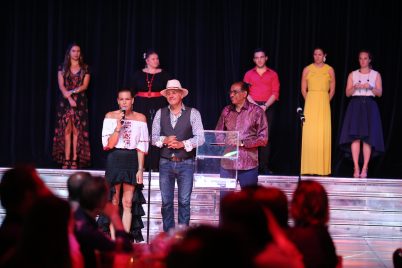 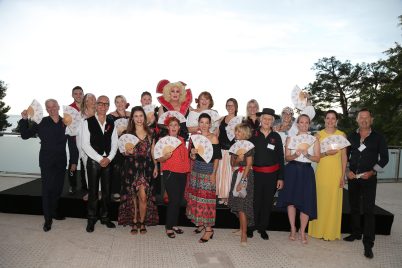 Through donations and the proceeds of a grand raffle of items offered by generous donors such as Cartier, Yves Piaget and others, FAM raised Euro 40,000 that will enable the 130 affiliated members to benefit from cultural, ludic and sportive trips all along the year, a needed breath of fresh air in their daily lives that provides wellness and comfort, as well as receiving psychological assistance. The funds also help run the Maison de Viein Carpentras created in 2010, offering those in need a pause of a couple of weeks, the time to recover and gain forces in an ambiance of goodwill and friendliness, while helping them reintegrate into society.

Paris Declaration “Towards Monaco without AIDS”

On Saturday, July 7, 2018, the Mayor of Monaco, surrounded by several members of the town Council, welcomed HSH Princess Stephanie, Didier Gamerdinger, Michel Sidibe, Executive Director of UNAIDS, Bertand Audoin, Vice-President IAPAC, in charge of the program “The villages committed fro Europe”, in the framework of the Signing of the Paris Declaration “Towards Monaco without AIDS”. 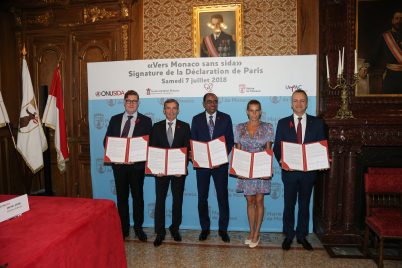 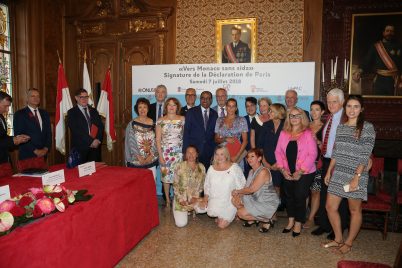 The declaration had been signed by Anne Hidalgo, Mayor of Paris, that had been the first city to get officially involved December 1, 2014. This co-signature by the Prince’s Government and the Monaco Town Hall enables the Principality to become the first village-state to commit to reduce radically the HIV contamination adopting the objective 90-90-90:

In his presentation the Mayor Georges Marsan reminded how it is “essential to continue with the screening campaigns”, notably thanks to the operation “Test in the City”, initiated in 2012 by Princess Stephanie. By bringing the screening outside of the hospital twice a year in different neighborhoods, the Fight Aids Monaco teams reach people in their daily surroundings, to better inform them about HIV and invite them to get tested. He also indicated: “if the screening is essential, communication is also fundamental in the fight to eradicate HIV.”

The plan I to increase the “Test in The City” campaigns to twice a year and launch, during the 4thtrimester of 2018, a communication campaign around U=U “Undetectable = Untransmittable”.

Test in the City… by night 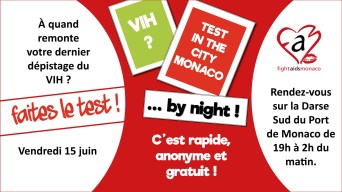 On Friday, June 15, 2018, in the presence of HSH Princess Stephanie, Fight Aids Monaco organized their annual HIV preventive screening operation Test in the City, a chance to take the VIH test with the Rapid HIV Testing (TROD or Test Depistage rapide a Orientation Diagnostique in French) that provides immediate results.

To be accessible to young people during the summer period, the operation took place for the first time between the hours of 19:00 and 02:00 on the Southern Dock of the Port of Monaco, between the Rainier III Pool and the Brasserie of Monaco. The Emergency Services of the Princess Grace Hospital was associated to this action.

Didier Gamerdinger, Minister of Social Affairs and Health of Monaco, who was present to support this initiative, declared: “Test in the City is an initiative carried out by Fight Aids Monaco. I congratulate them for this new approach towards the young people in the Principality, with the objective to create awareness over this important issue.” 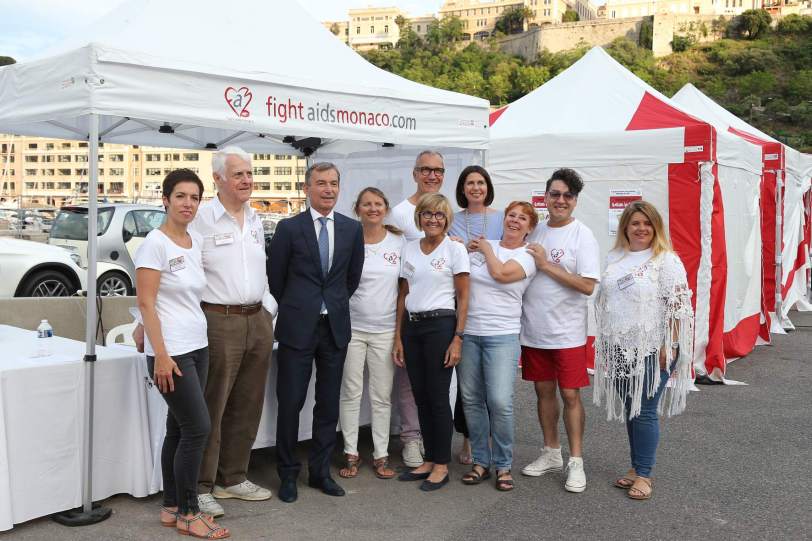 It is an anonymous screening test, free of charge and fast, with results within 10 minutes, that enables to detect anti-HIV-1 and anti-HIV-2 antibodies by a simple prick in the finger, easily carried out by non-medical people who are nevertheless trained in this procedure. Although HIV testing capacity has increased over time, enabling more people to learn their HIV status, the majority of people with HIV are still unaware they are infected.

The important value added objective of this screening is to keep people informed about the latest scientific advances, learn how to protect oneself and others, and most importantly put an end to the stigma of discrimination.

“HIV does not make people dangerous to know, so you can shake their hands and give them a hug: Heaven knows they need it!” Princess Diana