Empowering girls to become the leaders of tomorrow

In the occasion of the celebration of the International Day of the Girl on October 11, 2018, the Monaco National Council welcomed the Monegasque association SheCanHeCan, and 16 schoolgirls from 3 lycées in the Principality to discuss the role of women in politics. 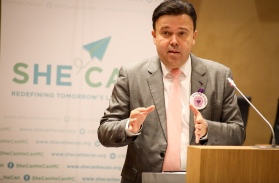 In 2011 the United Nations declared October 11 as the International Day of the Girl Child, an annual initiative to support and empower young women across the world. This year the theme is “With Her: A Skilled Girl Force”, commencing a perdurable effort to advocate female entrepreneurship and provide girls with the means to shape their own professional ambitions. It is based on the need to tackle increasing female unemployment rates worldwide, as well as top gender bias to encourage women to pursue the career paths they wish.

The Monaco-based non-profit organization SheCanHeCan is a proud partner in the #Girl2Leader campaign, launched in 2017 by the organization Women Political Leaders based in Brussels, Belgium. The objective of this global initiative is to bring girls into politics and leadership roles by visiting the Parliament and meeting female MP’s. It represents a special opportunity for girls to empower girls from all over the world, encouraging them to consider leadership roles in their communities, and to get involved in politics by hearing inspiring personal stories from women politicians, to learn how they got involved in this field. With this in mind Vibeke Brask Thomsen, Director of SheCanHeCan, collaborated closely with the Monaco National Council, to organize this important meeting enabling schoolgirls from the Principality to ask questions to the local MP’s about their experience in politics to encourage their own participation in the future. 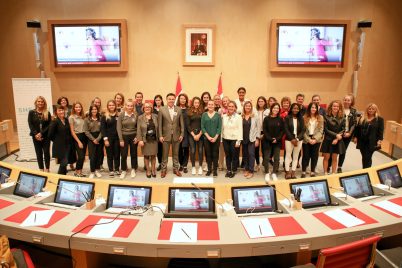 Today’s leaders are almost all men: 93% are Heads of State and 92% are Heads of Government. The time has come for real change, to enable girls and women to lead the world. The objective of #Girl2Leader is to encourage young girls to consider a career in politics and to understand the role and importance of women in politics.

On October 11, 2018, the International Day of the Girl, the #Girl2Leader campaign welcomed over 1,500 girls in events taking place in Albania, Bolivia, Canada, Guinea, Ireland, Kenya, Liberia, Malaysia, Malta, Poland, Romania, Rwanda, Ukraine, the United Kingdom, USA, and Monaco. To mark this important date the National Council and the Odeon Tower in the Principality were lit in purple.

SheCanHeCan is a Monaco-based organization, established in 2011, whose aim is to support and inspire girls to take leadership roles. It encourages both boys and girls to challenge deeply held gender stereotypes and realize their full potential, independent of their gender. Its work is three-fold: conducting workshops on equality in schools and for companies, hosting Parent-Child Book Clubs and celebrating the Day of the Girl in Monaco every year since 2013.

“I want every girl to know that her voice can change the world.”Malala