Frankie the Monegasque clown needs your help to offer the joy of Christmas to thousands of deprived children!

5th Edition of KIDS NITE – Around the World

The annual charity Gala KIDS NITE this year under the theme Around the World, is organized by the association Les Enfants de Frankie, presided by Francien Giraudi, at the magnificent Salle des Etoiles of the Sporting Monte-Carlo, on Friday, December 14 at 18:30, under the High Patronage of H.R.H. Princess Caroline of Hanover, with the support of Green & Mingarelli Design as official partner and the Boustany Foundation.

This solidarity event will welcome more than 500 guests, an exceptional party not to be missed where all proceeds will benefit the non-for-profit Les Enfants de Frankie, making it possible for the association to organize their 22nd Frankie’s Christmas for deprived children in the same place on Saturday, December 15, 2018. You, your sons and daughters and their friends will enjoy the magic of Christmas, and at the same time help disadvantaged children have their own holiday celebration the day after. The adagio “To give is to Receive”becomes true!

Privileged guests will have the pleasure of entering a fairy tale world with an interactive spectacular show for all audiences such as: Trampoline Champions, School of dogs, and a fanciful Comic Magician, followed by a delicious holiday dinner. 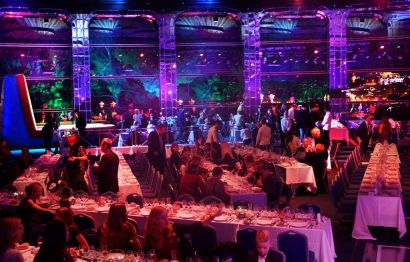 The surprise this year will be the performance of young French singer Max Cinnamon, candidate for Destination Eurovision 2018, will add spice to the festive ambiance inviting everybody onto the dance floor! 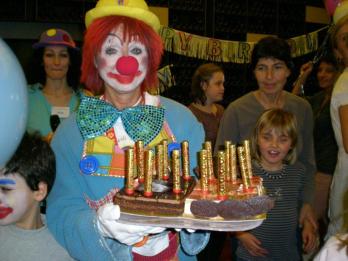 The Children of Frankie organizes, under the patronage of HSH Prince Albert of Monaco, its 22nd Frankie’s Christmas on Saturday, December 15, 218 in the afternoon, in the Salle des Etoiles of the Sporting Monte-Carlo, graciously inviting thousands of ailing and underprivileged children in the region each year. A highly anticipated afternoon where thousands of children will leave their sorrows behind, to celebrate the joy of the holiday season in all its splendor!

This special solidarity Christmas celebration is made possible thanks to the funds raised during the Kids Nite Gala the night before, the sale of Smileys, and the contribution of loyal donors. Thanks to those generous souls, thousands of ailing and deprived children will be a able to participate free of charge in a fantastic Christmas extravaganza that will include the same program of the Kids Nite Gala, where Frankie’s mascot will come accompanied by Santa Claus. All the children will receive a Christmas gift adapted to his or her age, as well as delicious snacks. 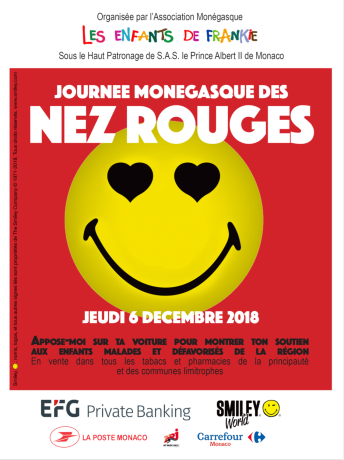 The Monegasque Day of Red Noses turned into Yellow Smileys takes place every year on December 6, to coincide with Saint Nicolas, patron of children. This year marks the 14th anniversaryof this initiative by the association The Children of Frankie, placed under the High Patronage of H.S.H. Prince Albert II, and the continuous support of EFG Bank Monaco and the Smiley World Limited. This innovative charity fundraiser has not changed its name even if the little red noses have metamorphosed into Smileys!

Monegasques, residents and people working in the region are invited to buy the little ball of yellow mousse to place on their vehicles, antenna, hood or interior windshield, to show the support to children in need, a simple way to practice solidarity. Proceeds benefit The Children of Frankie association, and are entirely dedicated to ailing and underprivileged children to improve their daily lives.

The Yellow Smileys represent Frankie the Clown, mascot of the association, are sold at a symbolic price of € 2 or more at post offices, pharmacies and newsstands, as well as the Carrefour Commercial Gallery in Fontvieille and the FNAC. For detailed information call: +377 93 300 800 or visit the website www.frankiemonaco.org 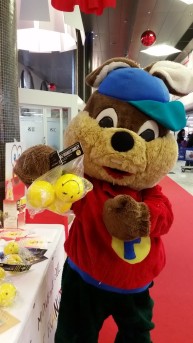 Created and presided by Francien Giraudi, alias Frankie the clown, in 1997, Les Enfants de Frankie has an objective to organize projects and pedagogic activities for ailing and underprivileged youngsters in Monaco and throughout the Provence and French Riviera region, better known as PACA. The association counts with a small but very dedicated staff, the board members, and with the help of more than 150 caring volunteers, plus 350 members, 200 donors and many loyal partners.  It has been recognized by the United Nations as an NGO (non-governmental organization) since 2008. They collaborates with hospitals, social services, and more than two hundred institutions that help underprivileged children.

Since its inception the association has assisted more than hundreds of thousands children in need. Even their office building rhymes with their objectives as it is housed in the “Golden Sun” (Le Soleil d’Or), with a team that works long hours so that ideas may turn into projects and ultimately become a reality, bringing smiles to the faces of thousands of suffering children.

“Remember that the happiest people are not those getting more, but those giving more.” H. Jackson Brown, Jr