On Sunday, November 4, 2018 a fleet of 123 boats, grouped in 6 categories – Class 40, RhumMono, Imoca, RhumMulti, Multi50 and Ultime – over a line of 5km, distributed in 4 segments departed from Saint Malo, a port city in Brittany in the northwest of France, direction Pointe-a-Pitre in Guadeloupe, for the 40thanniversary edition of the legendary solo transatlantic Route du Rhum.

Departure at Saint Malo for the Route de Rhum @RoaminDruenne 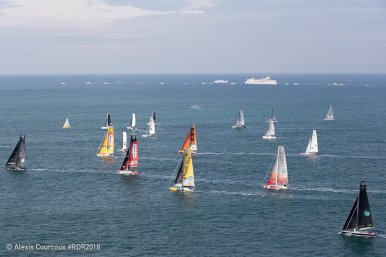 Victory went to French navigator Paul Meilhat after 12 days at sea, following British sailor Alex Thomson (Hugo Boss) who was first of the IMOCAs (18m mono-hull) to arrive in Guadeloupe, Friday morning, but who incurred a penalty of 24 hours for having used his engine after going aground about 60 miles from the finish.

The last British to win the Route du Rhum in the IMOCA class was Dame Ellen MacArthur back in 2002.

After 13 days 3 hours 47 minutes and 30 seconds of racing Boris Herrmann, skipper of Malizia II-Yacht Club of Monaco, crossed the finish line of the Route du Rhum –Destination Guadeloupe race, on Saturday, November 17, 2018, covering 4,437 miles at an average speed of 14.5 knots. The famous race is organized every four years.

“I was aiming to be in the top 5,”said Boris Herrmann when departing Le Havre on November 4, and the mission was accomplished for the experienced skipper and his foiling mono-hull Malizia II, who came 5th in the IMOCA class out of 20 entrants. It was an incredible performance for the 37-year-old who was competing in his first solo transatlantic crossing and who even managed to lead the fleet for 24 hours. His next goal will be Vendee Globe 2020!

For YCM Vice-President Pierre Casiraghi who set up and supervises the Malizia II project, there was immense pride as this was the first time his team entered this mythical race.

Pierre Casiraghi and Boris Hermann on board Malizia II@mesi_HD 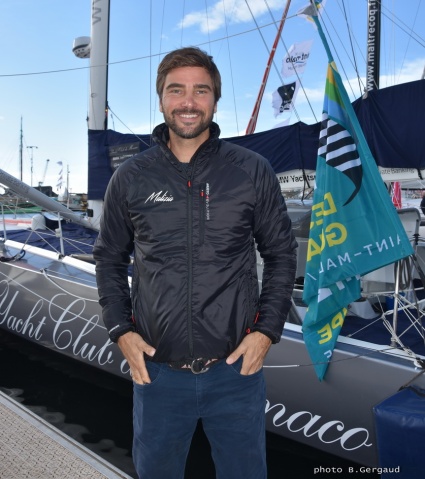 Boris Hermann and Malizia II at departure from Saint Malo, November 4, 2018@B. Gergaud

Alexia Barrier on board 4myplanet2 still in the running

Among the 123 boats in six categories on the start on Sunday November 4, 2018, there were 20 in the high-performance IMOCA class where we find boats that have already notched up prizes in the Vendée Globe, Barcelona Race and Transat Jacques Vabre. Some have foils, others not, and all are helmed by seasoned racers who have their sights set on the next Vendée Globe, “Sailing’s Everest”. But the sea and weather decided that few would arrive in Guadeloupe, and during the first week teams along the coast of Brittany and Portugal were to be found, some seeking shelter, others badly damaged. Saturday evening, five of them have arrived, ten are still in the race, a few of them are still sailing on the other side of the Atlantic and will arrive a long time after the party’s over. But they will have done it. They will have fulfilled their commitment and can start to dream of other races.

One of those sailors still on the race is Alexia Barrier, one of the three women competing in this year’s Route de Rhum in the IMOCA category on board the oldest boat in the fleet, the legendary Pingouin, a Lombard designed boat from 1998 renamed 4myplanet2. Alexia is gradually getting closer to her childhood dream, the Vendee Globe 2020. 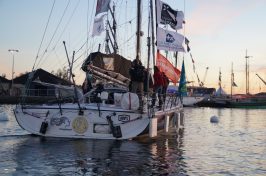 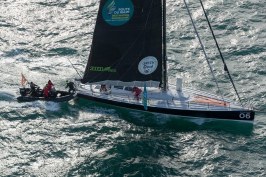 When Alexia qualified for the Route de Rhum she said:“The Route du Rhum will be something new for me, but also for the boat, as strangely, she has set off six times around the world (including four times in the Vendée Globe), but she has never taken part in the Route du Rhum. It’s going to be hard to keep up with the other competitors. I’ll be looking for other ways to work and giving it my all in any case, as I am a very competitive person. I’m lucky to be able to compete in this race, which is also a great opportunity to practice as we look forward to the 2020 Vendée Globe, which is the ultimate challenge for me.”

To help her reach her dreams, Alexia is supported by a group of loyal sponsors, among which is the Mairie de Monaco and the Association Femmes Chefs d’Entreprises de Monaco (AFCEM) where she is an active member. Vamos Alexia!

“The important thing in life is not to triumph, but the struggle, the essential thing is not to have conquered but to have fought well.” Pierre de Coubertin