Within the framework of the Universal Children’s Day, students from public and private institutions in CM1, CM2 and 6th grades, under the leadership of Isabelle Bonnal, Director National Education, Youth and Sports of Monaco, had the opportunity to watch the documentary On the Way to School, and meet film Director Pascal Pilsson. 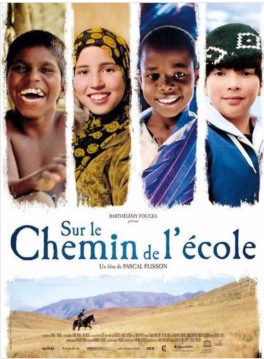 The film illustrates the incredible and true stories of four children, not actors but real heroes, as the scenes are not scripted but show their crude reality. Zahira in Morocco, Jackson in Kenya, Carlos in Argentina, and Samuel in India, each going through tough challenges everyday, often risking their lives, to get to school. After watching the film, Monaco students had the chance to interact with Pascal Pilsson, and discuss the fact that many children do not have easy access to education, that is crucial to guarantee a better future. Privileged Monegasque students learnt through the movie, that each of those children fight a daily battle for knowledge, because they are convinced it is their only chance to scape poverty, have access to an education and succeed.

At the end of the interactive conference by Pilsson, Isabelle Bonnal, Director National Education, Youth and Sports, presented a check of Euro 10,000 to H.R.H. Princess of Hannover in her quality of President of AMADE, to support their commitment to the protection and the empowerment of children around the world.

Building a better world for our children

United Nations Universal Children’s Day was established in 1954 and is celebrated on November 20 each year, to promote international togetherness, creating awareness among children worldwide, and to improve children’s welfare. On November 20, 1959 the UN General Assembly adopted the Declaration of the Rights of the Child, and on the same date in 1989 they adopted the Convention on the Rights of the Child.  Universal Children’s Day is an inspiration to help promote and celebrate children’s rights everywhere, promoting dialogue and actions to build a better world for children.

Pascal Plisson is a French screenwriter and documentary filmmaker, an autodidact he stop his studies at 15 years old to travel the world. After different jobs he discovered filmmaking and started his career by covering sports in the USA in the 1980s. Always passionate by travel and ad ventures, he spent several months in Africa in the 1990’s, notably Kenya and Tanzania, where he did reportages for National Geographic, BBC and Canal+.

His first feature film premiered in 2003: Massai the warriors of the rain, and his second destined for the big screen is On the Way to School (Sur le Chemin de l’Ecole), accompanying four children from India, Kenya, Morocco and  Argentina, confronted to multiple obstacles on their arduous road to school. The film highlights the importance of education and the fervor of these young children. The film was honored with the Cesar to the best documentary.

The filmmaker returned in 2015 with Le Grand Jour, a new documentary on education through four adolescents getting prepared for an academic or sportive challenge.

“There can be no keener revelation of a society’s soul than the way in which it treats its children.”Nelson Mandela (Former President of South Africa)