Comedy is acting out optimism

A very successful edition of the Monte-Carlo Film Festival of Comedy culminated with the glamorous Awards Gala on Saturday, March 9, 2019, at the Grimaldi Forum, masterfully conducted by its Founder and President, Ezio Greggio, accompanied by beautiful Juliana Moreira, a Brazilian model and showgirl naturalized Italian. (Photo: Juliana Moreira and Ezio Greggio @WebStudio06)

All the prizes had been officially selected by a prestigious Jury presided by famous Serbian director, actor and musician Emir Kusturica, who was recognized with the Legend Award. The other illustrious members were Sandra Milo, the iconic Italian star that worked with Fellini, Rossellini, Zampa, Molinaro, and Jean Renoir and who was presented that evening with the Career Award, charming French actress Mathilda May, and handsome Italian actor Edoardo Leo.

And the award winners are… 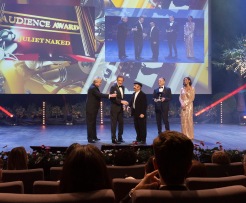 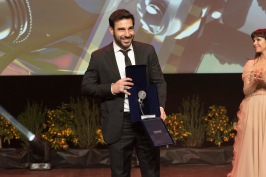 “If you could choose one characteristic that would get you through life, choose a sense of humor.”Jennifer Jones