A powerful SOS message for our planet

On Monday, March 18, Prince Albert II signed and inaugurated the monumental mural of over 80sqm, entitled “Global Warming”, created by Brazilian artist Eduardo Kobra exhibited at the Yacht Club of Monaco. Like Prince Albert, the artist is committed to sustainable development and the protection of the environment. The artist offered a canvas, an exact replica of the mural 1 of 10th, to Prince Albert. The work of art will be reinstalled on the ramparts of Fort Antoine, be visible from all over the Principality, coinciding with the opening of the Monaco Ocean Week, March 24-30, 2019. 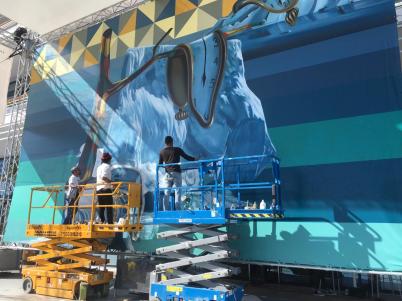 Kobra, born in Sao Paulo Brazil in 1976, is a guest of the Association Brazil Monaco Project, presided by Luciana de Montigny, spouse of the Honorary Consul of Brazil in Monaco. Her objective was to support her association and the Prince Albert II Foundation, through the sale of a canvas replica of the mural, as well as eight versions of the design made in enamels of Longwy, at a cost of Euro 180,000 and Euro 100,000 respectively.

“Kobra’s mural is a way of sending an SOS message for our planet. I am very happy with the work of this artist who has shown his art in more than 25 countries in the five continents. Kobra made it into the Guinness World Record twice, breaking his own record. He is simply extraordinary,” Luciana de Montigny declared enthusiastically.

“It was the first time I painted a mural here in Monaco. The mural was inaugurated by Prince Albert II, and that makes me honored, and at the same time is a sign of the attention environmental causes deserve,” affirmed Eduardo Kobra.

Eduardo Kobra’s street art murals can be found all over the world, and his polychromatic style images have metamorphosed city walls and sidewalks into attractive and colorful art pieces, depicting his native Sao Paulo city’s issues, or as an eulogy to influential personages such as Martin Luther King Jr., Nelson Mandela, Gandhi, Bob Marley, Albert Einstein, Salvador Dali and Dalai Lama, among others.

Kobra creates visuals to address homelessness, unemployment, and misuse of political power in his country. He highlights issues such as deforestation, animal torture, global warming, preservation of forests and indigenous people.

In 2011, he created the Greenpincel, an initiative criticizing the destruction of nature and the killing of animals by humans. With power murals, he intends to artistically combat the various forms of aggression against nature.

“I’m always going to paint. But we artists can’t be silent and close our eyes to the issues going on around us.” Eduardo Kobra