Improving the relationship between humanity and the sea

The 3rd edition of Monaco Ocean Week, run from March 24-30, 2019, organized by the Prince Albert II of Monaco Foundation, the Government of Monaco and their partners; the Oceanographic Institute of Monaco, the Scientific Centre of Monaco and the Yacht Club of Monaco (YCM), to discuss the protection of our ocean, the largest ecosystem on Earth, for present and future generations.

Prince Albert II of Monaco is firmly committed to the preservation of our oceans to safeguard our life in the planet, following in the footsteps of visionary Prince Albert I, one of the founders of modern oceanography, and the first who understood the importance of the sea, and the need to improve the relationship between humanity and the ocean. 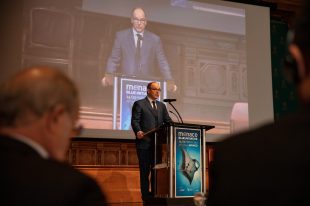 This unifying event reunited under one-roof scientists, experts, NGOs, and civil society representatives to discuss the issue of ocean protection.

On the agenda were topics addressing innovation, research, and development of a blue economy. The possibilities offered by biomimicry, the opportunities created by bioplastics, rethinking yachting of the future, pooling initiatives to curb and tackle plastic pollution more effectively, and developing a sustainable ocean economy are among the themes discussed during workshops and conferences.

World opinion leaders reunited to save the ocean

Close to a hundred world opinion leaders from the scientific community and international organizations, as well as prominent autodidactic eminent figures passionate about the sea, were present during the Monaco Ocean Week. Below is a partial list.

The 10thedition of the Monaco Blue Initiative opened the Monaco Ocean Week on March 24-25, to analyze and highlight the possible synergies between the protection of the marine environment and socio-economic expansion.  The primary objective is to improve the development of Marine Protected Areas (MPAs) by increasing their efficacy and scope.

These sanctuaries appear to be one of the most appropriate solutions for protecting marine ecosystems from the devastation of human activities. Still, they are too few in number since they only represent 7.44% of the surface of the world’s oceans, so MPAs must be multiplied and better managed to protect marine biodiversity. Among the questions debated this year in the context of conservation and exploitation, were: how can we ensure the adequate protection of the marine environment beyond the Aichi targets; how does a coherent network of MPAs contribute to the protection of migratory species; and what economic value should be attached to MPAs. 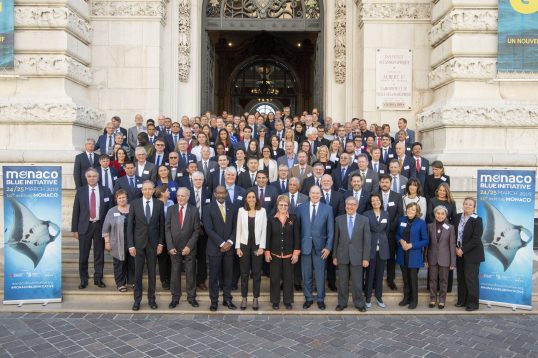 The screening of OCEANS the first film by OceanX took place on Thursday, March 28 at the Oceanographic Museum .  Ray Dalio, an American investor, and philanthropist who runs the Bridgewater Associates hedge fund founded OceanX, an entity keen to compete with Elon Musk’s SpaceX regarding the exploration of the deep sea, the vast majority of which has yet to be explored.

A true odyssey through the most extensive and less explored habitat of the planet, the film examines several marine environments. Through 125 expeditions, 6000 hours of shooting underwater, four years of productions through 39 countries. From the littoral to the deepest abyss passing through the Poles or the coral reefs, the documentary unveils the untold stories of the most amazing creatures of the oceans, revealing the daily life of marine animals. Theater of all dangers, aquatic life illustrates perfectly the notion of the food chain, where each predator is prey. We are witness to a true epic, made of fights, rescues, elation and moments of poetry, exquisitely narrated by English actress Kate Winslet.

The 9thedition of La Belle Classe Superyachts took place on Thursday, March 28 at the YCM. The objective was to recognize the most audacious and innovative yachting projects in favor of marine ecology and celebrate the conquering spirit of Prince Albert I, who spent his life to exploring the seas searching for scientific veracity.

Twenty-five speakers from all over Europe were invited to present significant trends driving the future of superyachts to an audience of owners, yachting professionals, and associations involved in protecting the marine environment. 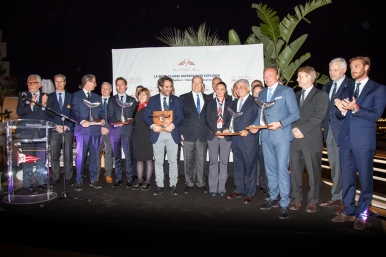 On Thursday, March 28, Prince Albert presented the Prince Albert II of Monaco – Pasteur Institute to Swedish Professor of Epidemiology Joacim Rocklov, in the section of Sustainable Health of the Department of Public Health and Clinical Medicine of the University of Medicine of Umea, and Associated Researcher of the Public Health Institute of the Heidelberg University.

It recognized a researcher who contributed to the study of the impact of environmental changes on human health.

A glance on the Mediterranean

The Results of the first observation campaign for marine megafauna ever carried out across the whole Mediterranean Sea were presented on Wednesday, March 27 at the Yacht Club of Monaco.

This conference was dedicated to an exceptional initiative implemented by the Agreement on the Conservation of Cetaceans of the Black Sea, Mediterranean Sea and Contiguous Atlantic Area: the ACCOBAMS Survey Initiative (ASI), in the presence of Prince Albert II, government representatives, international organizations and members of the Club Soroptimist of Monaco, partner of this event, and clubs in the area.

Eighty people gathered for the presentation of the results of the first ASI observation campaign for marine megafauna (cetaceans, turtles, rays, sharks, seabirds), and plastic pollution ever conducted covering the entire Mediterranean Sea. During this campaign hundred, scientific observers from 20 Mediterranean countries made several tens of thousands of surveys on board eight small planes and six research vessels. This information will help to implement more useful measure for protecting Mediterranean Sea biodiversity but also encourage individual awareness of the need for urgent action at all levels, including on a day-to-day basis, by adopting responsible behavior.  “It is time to act and put the preservation of biodiversity, that we are part of, at the heart of our initiatives!” strongly affirmed Florence Descroix-Comanducci, Executive Secretary of ACCOBAMS.

Urgent action to save the coral reefs

On Tuesday, March 26, during the International Coral Reef Initiative (ICRI), they emphasized the need for immediate action to save the coral reefs from extinction.

The corals, essential habitats for marine biodiversity, are threatened with extinction by 2050. ICRI’s members, where Monaco is co-chair, alongside Australia and Indonesia until 2020, met for the first time in the Principality. This meeting aimed to establish priority action areas addressing one of the Aichi targets for coral reef preservation.

The event gathered 50 participants and enabled to emphasize the principal objectives of the ICRI action plan 2018-2020: 1) Development of recommendations for states members of the Biologic Diversity Convention concerning a new target for the preservation of the coral reefs from 2020. It responds to the urgency to act to save the reefs threatened in large scale towards 2050; 2) The production of a rapport on the state of health of coral reefs worldwide for 2020.

Educating the leaders of tomorrow on ocean preservation

Beyond Plastic Med passed on the baton on Tuesday, March 26, at restaurant Stars’N’Bars. Throughout the day, BeMed organizers hosted fun and interactive events for school children to make them aware of the extent of plastic pollution in our oceans and its consequences on Humankind and the environment.

Children mobilized for biodiversity on Wednesday, March 27, at the Oceanographic Museum of Monaco. Youngsters from 7C at the Ecole des Révoires presented the educational marine site they have selected, located under the Oceanographic Museum, for its wealth in terms of biodiversity, the initial phases of creating the educational marine area and their “action for the sea” projects, in the presence of Prince Albert, Pierre Casiraghi, Marie-Pierre Gramaglia, Patrice Cellario and Isabelle Bonnal. The students had prepared posters with slogans such as Stop overfishing, No sea no life.

An educational marine area is a small coastal sea area managed in a participatory manner by primary school children, thus promoting the knowledge and protection of the marine environment by a young audience. The concept developed in the Marquesas Islands in 2012, was recently implemented in the Principality of Monaco.

A photo competition was launched between secondary school students to win a trip to Antarctica, in the presence of Laurent Ballesta, photographer, diver, and marine biologist, on Tuesday, March 26, Lycée Technique et Hôtelier in Monaco

Every year, this contest reserved for Monegasque secondary school students offers two winners an opportunity to embark upon a trip to the other side of the world. This year, the destination is Antarctica departing during July 2019.  The two students who left in 2018 talked about their experience of their trip to those trying their luck for the voyage this summer.

“I hope for your help to explore and protect the wild ocean in ways that will restore the health and, in so doing, secure hope for humankind. Health to the ocean means health for us.”Sylvia Earle, Oceanographer