Solidarity is the name of the game

The Rolex Monte-Carlo Masters got underway today Saturday, April 13 at 11:00 with qualification matches in all courts, but the highlight of the day was the tennis charity exhibition, where top players gathered on Court Rainier III to raise funds for the Monaco Red Cross.

Former champion Swiss Stan Wawrinka and World No. 5 Austrian Dominic Thiem were their respective teams’ captains in an amusing charity exhibition, to benefit the Monaco Red Cross, at the Rolex Monte-Carlo Masters this Saturday. 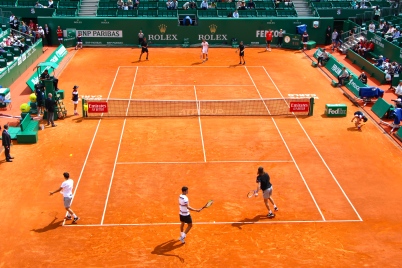 Both teams contested a Match Tie-break, which featured a variety of interesting rule changes. After Pouille and Dimitrov were eliminated in the early stages, a series of two-on-one points took place before Tsitsipas and Medvedev were forced to play left-handed on Court Rainier III.

Tsitsipas, who had experience playing left-handed when he was younger, managed to get the better of Medvedev in an extended rally. But that would not be enough for his team, which fell to a 10-7 defeat. With two-handed backhands banned on match point, David Goffin overcame Karen Khachanov to claim victory for Wawrinka’s team.

Goffin also played a crucial role in the target-based skills game that followed. With players aiming to hit three targets with just three service attempts, Goffin secured a 3-0 win for Team Stan. The 2017 Nitto ATP Finals runner-up was the only player to strike any of the targets.

A few of the players left to continue their training sessions, while some of them gladly posed for a group photo with members of the Board of the Monaco Red Cross, Frederic Platini, Danielle Cottalorda and Bettina Ragazzoni-Janin. 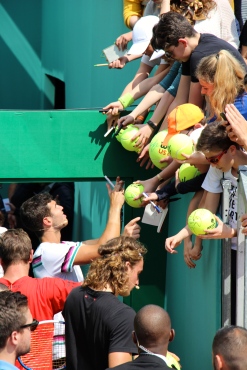 Not all was fun and laugh this Saturday, as players in all 5 courts were battling for qualification in singles and doubles. See today’s results in the table below:

“Tennis: It’s all about the LOVE!”