Bringing back the grandeur and splendor of another era

This past weekend, June 27-30, 2019, the Principality brought back the grandeur and splendor of another era, during the revival of the Elegance and Automobile in Monte-Carlo organized by the Automobile Club (ACM), under the High Patronage of TSH the Prince and Princess of Monaco. The ACM continues to organize events with great respect for tradition and innovation, following on the wishes of its founders and pioneers of the past.

The Director of the event is Monaco resident Christian Phllippsen, a senior specialist in cars of exception interest, contemporary and classic, who loves their mechanics and design.  Forty-seven cars dating from 1914 to 2019 coming from all over the world descended in the Principality to participate in the glamorous contest,

The privileged contestants checked in at the recently exquisitely revamped Hotel de Paris and were treated to a Welcome Cocktail Reception on the Casino Terraces on Thursday, June 27.

The day after, they enjoyed an outing on the most beautiful routes of the surrounding countryside with a delicious picnic en route at the Domaine de Mont Leuze in Villefranche Sur Mer, with glorious views of the Mediterranean. 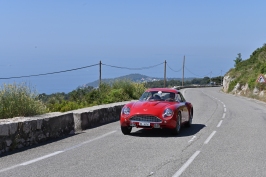 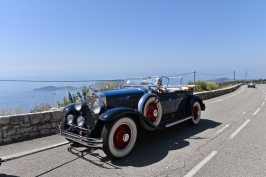 After sunset, they were invited to a candlelight dinner under the stars at the celebrated Grill of the Hotel de Paris, that not only offers the most delicious souffle but has the best view in town.

On Saturday, June 29, the cars were exhibited on the Casino Terraces, to the admiration of residents and tourists alike. Lunch was organized at the Monte-Carlo Beach Hotel. In the afternoon the cars paraded around the Casino Square, each with a special story to tell, with the favorites selected by a Grand Jury. The prestigious members were: Sandra Button, president of the Pebble Beach Elegance Contest, artist Lorena Baricalla, former driver Thierry Boutsen, Gery Mestre, President of the Commission of Collection Cars of the ACM, the automobile designer Lorenzo Ramaciotti, and Christian Philippsen. 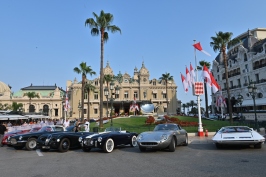 On Sunday, June 30, all the cars gathered and embellished, even more, the Palace Square, with Princess Charlene doing the great honor of presenting the trophies to the happy winners.

Princess Charlene with Christian Philipssen and Michel Boeri and one of the prized cars @ Eric Mathon : Palais Princier

The automobiles participating in the Elegance and Automobile in Monte-Carlo, 2019 on the Palace Square@ Eric Mathon : Palais Princier

“A car isn’t a classic just because it’s old. To be a classic, a car has to tell us something of its time.” James May