Jean-Christophe Maillot (in the photo insert @Alice Blangero) perfected his own masterpiece The Taming of the Shrew for the dancers of the Ballets of Monte-Carlo, performing in the Salle des Princes at the Grimaldi Forum in the Principality from July 26-28, 2109, to standing public ovation! Maillot perfected his original creation through the close interaction with his own dancers, plus the invaluable collaboration of his muse former prima ballerina Bernice Coppieters, now assistant-choreographer.

This breathtaking ballet in two acts had been originally created by Maillot for the legendary Bolshoi Ballet, with music extracts by Dmitri Shostakovich he had specially selected. It premiered first in Moscow and then in Monaco in 2014 inaugurating the Russian year celebrations in the Principality. The Bolshoi had invited a foreign choreographer for the first time, to create a large-scale narrative ballet for its dancers, and Maillot had previously refused all offers to create a new ballet for any other company. But he was persuaded by artistic director Sergei Filin, who more than a year earlier had been almost blinded by a cruel acid attack but who never lots his aesthetic vision. Maillot’s ballet recreated for the dancers in his company, is thrilling and intoxicating, a sensual dance that goes from whimsical to violent, with that touch of eccentricity that characterizes him.

Love in all its declinations

The Taming of the Shrewis a comedy by William Shakespeare, written probably between 1590 and 1592, a controversial farce that was criticized as sexist and paternalistic. The Taming of the Shrew is mostly comical with a twist of sarcasm while expressing a serious theme: the search for the right man and the right woman in a world where convention defeats reliance, so finding the perfect partner is a challenge of supreme importance.

The main argument depicts Baptista (Koen Havenith) as a rich gentleman and the father of Katherina (Alessandra Tognoloni) and Bianca (Katrin Schrader). Tradition obliges him to marry his elder daughter Katherina first, even when all suitors prefer younger and amiable Bianca. The subplot features a competition between the elder sister suitors and her more desirable sister Bianca, but the main story centers on the courtship of Petruchio (Francesco Mariottini), a gentleman from Verona, and Katherina, the headstrong, obdurate shrew, a woman with a violent temper and how her husband ends up conquerings her heart.

The dancers of the Ballet of Monte-Carlo, The Taming of the Shrew, JC Maillot @Alice Blangero

Victoria Ananyan, The Governess, the Taming of the Shrew by Jean Christophe Maillot, 2019 @Alice Blangero 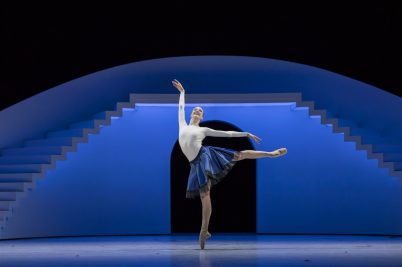 Katrin Schraeder as Bianca in The Taming of the Shrew of Jean Christophe Maillot, 2019 @Alice Blangero 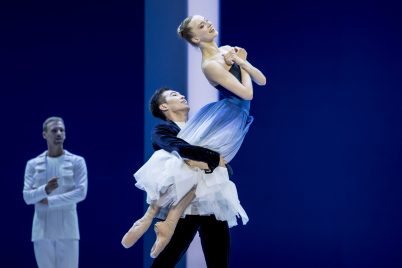 Katrin Schrader as Bianca and Jaeyong An, The Taming of the Shrew, JC Maillot @Alice Blangero

Their love is out of the ordinary: while Petruchio could appear to be interested only in Baptista’s fortune, but the truth is he is really interested in Katherina and only her. However, he needs to put her through a series of challenges to prove that they are made for each other. If she gives in to her husband’s demands, it’s not because she has found her master, but because she has met her match.

Francesco Mariottini as Petrucio, with Alessandra Tognoloni as Katharina, The Taming of the Shrew, JC Maillot @Alice Blangero

Francesco Mariottini as Petruchio, and Alessandra Tognoloni as Katharina, The Taming of the Shrew, JC Maillot @Alice Blangero

Alessandra Tognoloni as Katharina and Francesco Mariottini as Petruchio, The Taming of the Shrew, JC Maillot @Alice Blangero

Jean-Christophe Maillot made it a point to focus on what really matters in a romantic relationship repudiating the notion of male supremacy, by deconstructing love in all its forms, daring to question social conventions, while constantly pushing his dancers to make a quantum leap outside the box, both physically and emotionally.

In last night’s performance, Alessandra Tognoloni was splendid as Katharina the shrew, in her passionate interaction with abrupt but very sensual Petruchio played by Francesco Mariottini, while Katrin Schraderwas sublime as the beautiful and docile Bianca in her love innuendos with Lucentio, Jaeyong An.

“My tongue will tell the anger of my heart, or else my heart concealing it will break.” William Shakespeare, The Taming of the Shrew