The new building capacity will enable IUM to grow

On Wednesday, December 11, 2019, Prince Albert officially inaugurated the new premises occupied by the International University of Monaco in the building Le Stella in La Condamine. Among the distinguished personalities present were: Stephane Valeri, President of the Conseil National, Patrice Cellario, Minister of Interior and Culture, Cristiano Gallo, Ambassador of Italy in Monaco, Laurent Stefanini Ambassador of France in Monaco, and many other distinguished personalities.

After the traditional cutting of the red ribbon and the discovery of the inaugural plaque, the participants visited the 2000 m² of the state-of-the-art establishment with ultra modern and very connected classrooms, meeting rooms and study spaces. 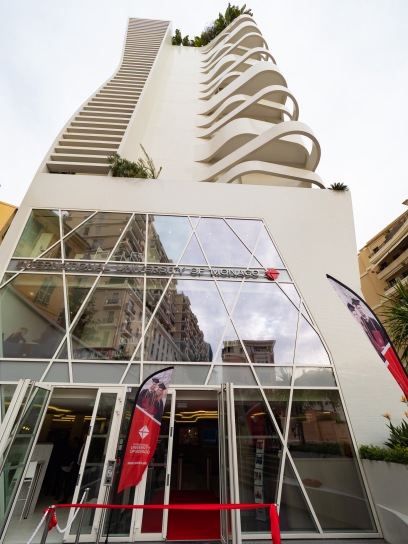 The visit was highlighted by a brief presentation by Jean-Philippe Muller, Director General of the University, thanking Prince Albert for his support since the beginnings of IUM back in 1986. Muller also recognized support received by the Department of the Interior when the question of his departure from the Stade Louis II was discussed almost 2 years ago.

The capacity of the Stella premises will allow the IUM to reach its realistic growth objective, since their ambition is to increase from the present 600 students to 800 within a few years.

In his inaugural speech, Muller said: “I hope that the next 33 years at Stella will be as fruitful as the 33 passed at Stade Louis II”. A good prospect for the school, whose next goal is to obtain, from 2020, the prestigious AACSB accreditation that would allow it to join the ranks of the 796 best international business schools, thus contributing to enhance the image of the Principality of Monaco.

After its 33 years of existence, the International University of Monaco offers 4 specializations in Bachelor’s degree, and 5 specialized Masters (in finance, luxury management, international management, luxury marketing and sports management), an AMBA-accredited MBA and than a DBA which brings together around 600 students in its premises in the Principality.

“Education is the most powerful weapon which you can use to change the world.” Nelson Mandela