English, Russians and Danes on the podium

Act III of the 7th Monaco Sportsboat Winter Series for the J/70s sailed from January 16-19, 2020, organized by the Yacht Club of Monaco. The 180 sailors, grouped into 45 teams representing 13 nationalities, accomplished their mission with five races completed in perfect conditions ranging from a 5-12 knot westerly, ending on a 10-14 knot easterly.

It was a training ground for the J/70 World Championship scheduled in October 2021, that attracted international competitors like the Corinthian team from the Seattle Yacht Club, as well as 11 Nordic teams including four from Sweden, one from Finland and one from Denmark.

The Russians on Arttube led by the talented Valeriya Kovalenko fought long and hard to grab the first position, but two race-wins and a 2nd were not enough to dethrone Charles Thompson’s men on Brutus, and it took just one small point to clinch victory. They may be in the Corinthian amateur category but showed beyond doubt they are at the highest level. Impeccable from start to finish the English Royal Southern Yacht Club team kept up the pressure throughout the three days, showing remarkable consistency: 2nd, 2nd, 4th, 3rd and 5th.

It was the Danes on Upupup who grabbed 3rd to complete the podium, equal on points with Giangiacomo Serena di Lapigio (G Spottino) from the Yacht Club de Monaco.

Among the Monegasque entrants, Junda led by Ludovico Fassitelli did their best to stay close to the leaders, but were foiled by a 19th place and finished 6th overall.

This weekend’s win was enough to propel Brutus to the top of the provisional ranking for the Winter Series with 43 points under their belts after 15 races. Junda, who had led the fleet after the first two Acts, is not finished yet and lies in 2nd place.  Winners in 2017 and 2018, Arttube have their sights set on a triple, and their 2nd place this weekend takes them onto the third step of the provisional podium after three Acts. (Photo: Prize Ceremony @ Messi BD) 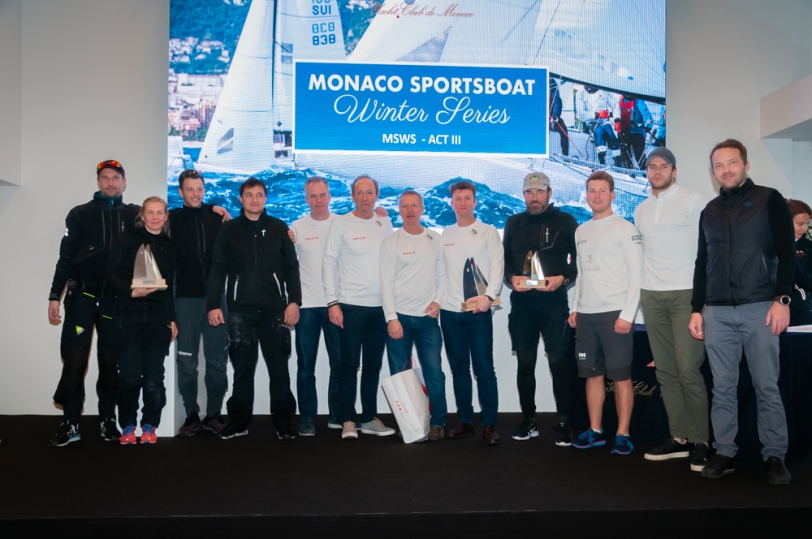 “To be successful at sea we must keep things simple.” Pete Culler