Diving in the Great Barrier Reef

The new exhibition IMMERSION was inaugurated this past Saturday, July 18, 2020, at the Oceanographic Museum of Monaco. It features the Australian Great Barrier Reef, one of the 7 natural wonders of the world. While they cover only 0.2% of the world’s oceans, coral reefs are home to 30% marine biodiversity. These oases of life, beautiful but fragile and essential to humankind, are nevertheless threatened on a massive scale and have become one of the endangered species. These coral reefs are non-motile animals, which gradually build their own colonies with the help of calcium carbonate secreted from the corals. This highly entertaining and educational presentation aims to increase awareness of the need to better protect our marine ecosystem.

The paramount multimedia installation set up in the Whale Room by an international team of designers, in collaboration with the Oceanographic Museum and its partners and divers and biologists, is intended to be entertaining and engaging. 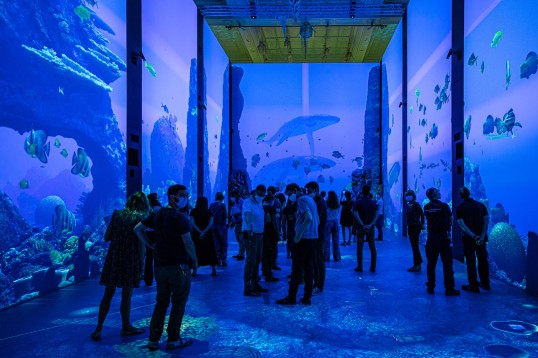 A view of IMMERSION, Oceanographic Museum of Monaco, July 2020 @Philippe_Fitte 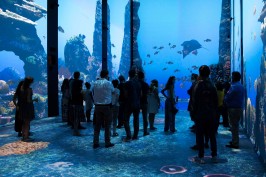 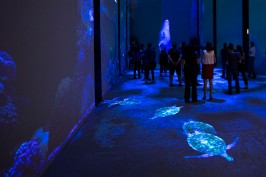 IMMERSION invites visitors to virtually dive below the surface to meet the iconic species that inhabit our planet’s vast coral ecosystem. To give life to this underwater odyssey, the most advanced technologies are used to further the Museum’s mission of mediation: to create a link between humankind and an ecosystem that is generally inaccessible. The public travels through a living environment in perpetual movement, where all encounters are possible: from the humpback whale to the carpet shark, from barracudas to fluorescent corals.

Pioneer Prince Albert I of Monaco

Having launched numerous projects on the national and international scene (symposia, exhibitions, educational programs, etc.), the organization pursues its mission of environmental mediation. It is supported by two institutions: the Oceanographic Museum of Monaco and the Maison des Océans in Paris.

The Oceanographic Museum on the Rock of Monaco

The Oceanographic Museum of Monaco is in an exceptional location, built by the sea on the side of the legendary Rock of Monaco. This is the Foundation’s “flagship,” and raises awareness among more than 650,000 visitors each year. Beyond its remarkable architecture, it is known for its state of the art aquarium, its events, exhibitions, and its art-and-science alliance. A place of culture and exchange, where experiences centered on the protection of the Ocean come together, the Oceanographic Museum organizes and hosts symposia on a myriad of subjects for an international discerning audience.

“Coral reefs represent some of the world’s most spectacular beauty spots, but they are also the foundation of marine life: without them, many of the sea’s most exquisite species will not survive.”Sheherazade Goldsmith